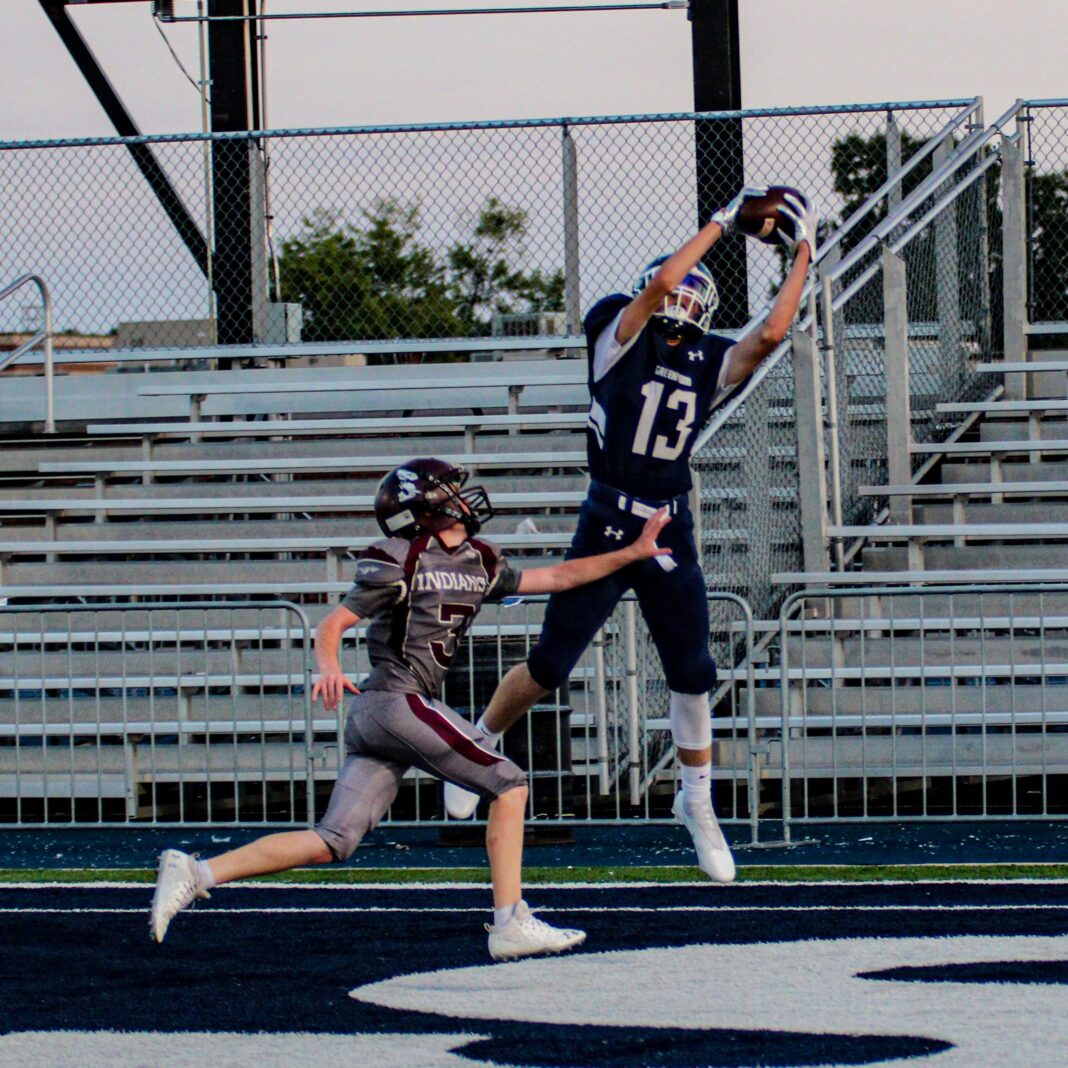 In what could be described as a David vs Goliath match-up, the Pocola Indians made the trek across state lines to face the Greenwood Bulldog 8th grade team. Pocola found themselves in a similar situation over the Labor Day weekend, their next opponent canceled due to Covid. This became common place in the 2020 season and even saw this class of Bulldogs missing out on two weeks of their season due to quarantine. A few calls later between Coaches and the game was set for September 9 at Smith-Robinson Stadium.

Jakson Overton would get the start on Thursday night as bounce back from the game against Russellville the week before. “He looked a lot more relaxed and he made some good plays.” Head Coach Shannon Rhea said after the game. “He ran the ball when he should, and he made a good pass throwing the deep ball down in the corner.”

Greenwood would start the game from their own 30 yard line, Wesley Raggio would get the call on the first place but would be tackled for a loss on the play. Jakson Overton would find Lawyer Thornsberry on the next play for a 9 yard gain, but the drive would stall on 4th down pass attempt to Benton Hossley resulting in a turnover on downs. Pocola would start their drive from the Greenwood 37. Pocola would drive down the field but stall on the 24 yard line. Going on 4th Down, Braden Hardwick would throw it to a Pocola receiver, Blaze McDaniel would break up the pass at the 4 yard line. Greenwood would take over at the 24. A 13 yard run by Wesley Raggio and a 11 yard run by Jakson Overton set up a 52 yard pitch and catch from Overton to Raggio for a touchdown. The two point conversion pass from Overton to Cooper Bland was caught putting the score at 8-0.

Pocola would take the ball at the 30 yard line to start there drive with Hardwick attempting a deep pass to Jackson Parker that would be incomplete. With some great passing the Indians would make it down the field capped off by a 2 yard run for the touchdown by Hardwick. Two point conversion would be good pushing the score to 8-8 in the 2nd quarter. Greenwood would answer back with a 66 yard run from Wesley Raggio. A leaping Cooper Bland at the back of the end zone would tack on another 2 points.

Pocola’s next drive would come to a stop on their own 26 with the Indians punting on 4th down. Jakson Overton would find Lawyer Thornsberry for a 32 yard catch putting the Dogs on the 25. Facing 4th and 11, Overton would toss it to Andrew Burton for the TD on a 26 yard strike. Pocola would take a knee to the game to halftime with the Dogs on top 22-8.

Pocola would start the 2nd half with a first down pass, they would not be able to convert on the next set of downs electing to punt. Some quick plays would find Brayden Shepard taking it into the end zone for 26 yards out, another Overton pass to Bland would put the dogs up 30-8. Middle of the fourth quarter Pocola would get another TD and two point putting the score at 30-16. From there the Dogs would drive down the field ending the game.

Jakson Overton came into the game looking for some positives and gained some by going 10 for 11 with 139 yards and two touchdowns through the air. The biggest one being the 26 yard pass to Andrew Burton. Rushing wise, Wesley Raggio would get 76 yards rushing on 6 carries and a touchdown. Brayden Shepard would get the ball two times and rush for 43 yards with one touchdown. Raggio would also lead in receiving yards off of the 52 yard touchdown. Lawyer Thornsberry would get 50 yards off of 3 catches, and Andrew Burton with 2 catches and 30 yards.

“With this group we have got to be able to run the ball, I think that’s our strength. We have got good size, and we got better.” Head Coach Shannon Rhea said. Next game is against the Darby Rangers out of Fort Smith. They feature an explosive running back in Demonie Brock and a transfer from Greenwood, Sean Durham. Coach Rhea went on to say, “We’ve got a really good opponent next week, we’ll find out what we got.”

“We’re happy to come over and play a big school like this and compete” said Pocola Coach Jason Parker. “Outside of a couple big plays we’re in that game.” Coach Parker had high praise for the Arkansas school, “This is a great program, everybody knows this is the cream of the crop program around here. I appreciate Coach Young letting us come over here and play and getting reps in. Ya know, this doesn’t do anything but make our boys better. We play a team like this that can roll in three different strings, then we go play next week it just makes our kids better.”

It was a reunion of sorts for some of the Greenwood 8th graders as they were coached by Jason Parker in the Spring Impact Youth Football League in 2018. Lineman, Landon Billy, Akira Fujibayashi, Running Back Wesley Raggio, and QB Kane Archer played for the Pocola coach on the now-defunct Fort Smith Cowboys. They would finish 3rd in the League that year and would springboard Archer into the National spotlight. Jason Parker’s son Jackson was also on the team and they met up after the game to get a photo with their former Coach. Parker was also the Defensive Coordinator on the Poteau Bandit Bi-State League team that nearly all of the 8th Grade Bulldogs played against as Pittbulls.