Be on the Lookout for Invasive, Destructive Box Tree Moths 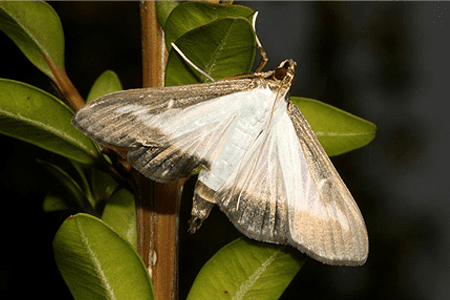 The Box Tree Moth, an invasive insect already a serious pest in Europe, may have been accidentally introduced into the United States through landscaping materials.

Many potentially infested Canadian boxwoods were shipped to seven states, and then moved to other secondary states, including Arkansas. USDA-APHIS is working closely with the affected states to find and destroy the imported plants in the receiving facilities before the Box Tree Moths can become established. The agency is also trying to trace the sale of imported plants to determine additional locations of potentially infected boxwoods. USDA-APHIS will provide box tree traps and lures for surveys in the receiving facilities and other locations that received potentially infected plants.

On May 26, USDA-APHIS halted the importation of boxwoods and two other species, including euonymus and hollies, which are also known to host the moth.
In Arkansas, any findings should be reported to Paul Shell, plant inspection and quarantine program manager for the Arkansas Department of Agriculture. Call 501-225-1598 or email [email protected].For more information and pictures of box tree moths, visit https://www.uaex.uada.edu/environment-nature/ar-invasives/invasive-insects/box-tree-moth.aspx.

Tammy Teague
Tammy is the heart behind the brand. Her tenacity to curate authentic journalism, supported by a genuine heart is one her many wholesome qualities.
Share
Facebook
Twitter
Linkedin
Pinterest
WhatsApp
Latest news
Food