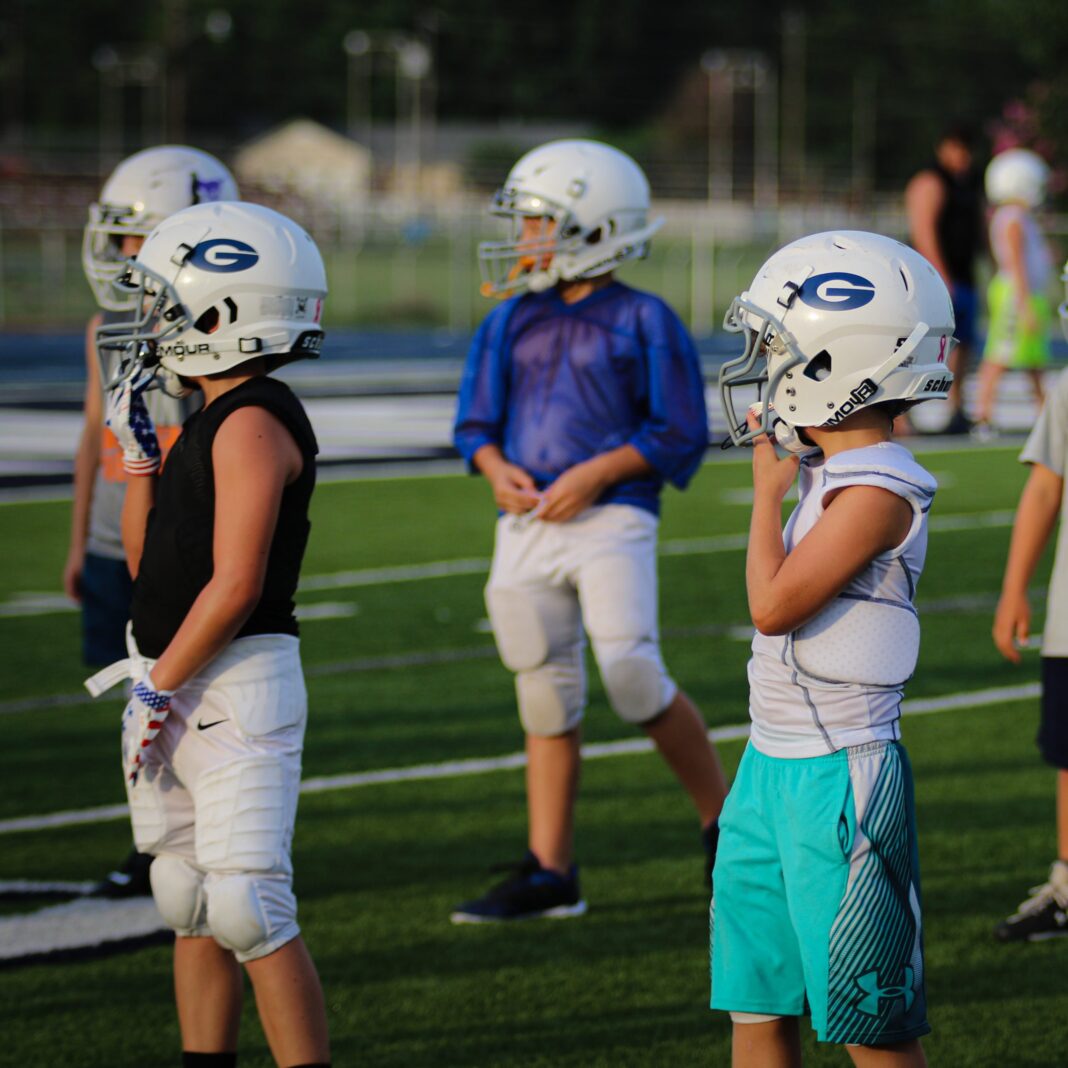 The sun beams down unrelenting on the turf, kids playing catch, some are running around until a voice calls out, “Alright! Players over here!” It’s the second part of the Pittbull preseason, new player orientation. Fifth and sixth grade new players have already been assigned their teams. Remaining on the field tonight are a group of third and fourth graders. They circle up for stretches before being divided to be evaluated once more for the draft.

As they stretch a couple, carrying an arm pad and paperwork, they meet the group of coaches then take their position on the sideline to observe the orientation, just as they have done for the past 13 seasons.

Scott and Crystal Strozier have been involved with the Pittbulls since 2008 when Scott began coaching. In 2012 they joined the board and continue to be a huge part of the Pittbulls. On any given Saturday, you’ll see Scott slinging burgers on the grill and Crystal keeping things moving.

Johnny McKusker, the President of the Board, arrives after a parent meeting for those in school ball.

Through these three individuals, the Greenwood Pittbulls have become one of the premier youth programs in the River Valley. How did this happen? How after 28 seasons have they become an integral part of the Greenwood Community?

It is June of 1992, a local business owner by the name of Danny Burton approaches the board of the South Sebastian County Youth Organization (now known as Greenwood Boys and Girls Club), regarding a tackle football program. At the time, more than a couple dozen families were traveling to neighboring Fort Smith and towns like Hackett, Van Buren, and Mansfield to participate in football. The outlook for the 1992 season had even more families making the trip to Greenwood’s neighbors. The SSCYO declined, citing difficulties in raising, adding that as a part of United Way, they would have to make the program available to everyone. As anyone familiar with the type of person Danny Burton was, knows what happened next. Burton went to work exploring other avenues.

Burton approached Mike Stem and Rick Smith about starting a program outside of the SSCYO. After contacting and receiving support from families in Greenwood, they contacted the President of the Arkansas River Valley Football League, Buddy Swift, about joining. At the same time, Paris was wanting to join the league and Swift thought it would be a good idea to expand from a six to eight league team. Greenwood and Paris would join; Booneville, Ozark, Hackett, Mansfield, Barling, and Lavaca on August 3rd, 1992.

While league talks were occurring, the Pittbulls set up their board of directors, naming Danny Burton President, Rick Smith as Vice-President, and Mary McCain as Secretary/Treasurer. Mike Pettigrew, Bill Copher, and Jim Butler would become board members.

Starting a football program is never easy, there is insurance and equipment to buy, in 1992 things of that nature totaled $4000. The founding parents donated enough to equip one or more players, alongside some area businesses assisting with donations. Longtime supporter of Greenwood Athletics, Farmers Bank, carried a $1500 note for the Pittbulls, to which the Pittbulls were able to pay back in an astonishing six weeks. By end of the 1992 season, their was enough funding to head into the next season.

Alongside the Football team it was also decided to have a cheer team. It consisted of 10 girls per team and was led by Amy Hurt.

On September 15, 1992 the Pittbulls took the field for the first time against new ARVFL member, Paris. The ARYFL had rules in place that one team was to be made up of 6th graders and a younger team made up of 4th and 5th graders. The 6th grade team, coached by Steven Leonard, Frank Nolan, Mike Stem, and Greg Pair, beat Paris 36-12. The 4th/5th grade team led by Rick Smith, Jerry Efurd, Donnie Sandifer, Gary Ezell, and James Butler would go onto beat Paris by a score of 30-8.

By seasons end, the 6th grade team had finished with a record of 11-1-1, tying against Booneville for the league championship. The 4th/5th grade team ended their season 7-3. The highlight of the season was both teams being invited to play in Little Rock against some great rivals. This is a present-day tradition that continues for the Pittbulls.

Throughout the years many familiar athletes have donned the white helmets, with the signature blue “G”. Tyler Wilson, Jacob Burton, Hunter Wilkinson, Luke Hales, Morgan and Jordan Hanna and Jayden Jasna, just to name a few. You see the Pittbulls uniforms on Friday nights, as so many kids do, playing catch with a football next to the stands watching and waiting for their turn to make their mark on the Football Town.

It is the foundation to Greenwood Bulldog Football, it’s where legends are unearthed and discussed years later. For example, Luke Hales’ team going undefeated all four years. A 76-70 game against Bentonville, where two rising stars Kane Archer and Braxton Lindsey (Bentonville) tried to out-duel each other. Hunter Wilkinson and Jordan Hanna going to Little Rock and winning the State Championship and then repeating the same feat in high School.

No matter what is done outside of Greenwood, everything starts with the Pittbulls. Crystal Strozier pointed out “of the nine that signed to play college ball in February, seven of those came through the Pittbull program.” The other two started in Union Christian and Lavaca.

The days of Greenwood being the Arkansas River Valley Football League are far behind them. Now it is the very competitive Bi-State League. A league rule change in 2018 called for teams to consist of athletes that attended their respective schools. In turn, it created parity within the league. Last year, albeit the “Covid” season, it saw every organization represented in the playoffs and Championship games. Teams from Sallisaw, Van Buren, Poteau, Greenwood, Bentonville, and Fort Smith all got a chance to take home the coveted Golden Football at season’s end.

For season 29, the cast remains the same with the possible addition of a Fort Smith Southside team to go alongside the talented Fort Smith Northside. Van Buren, who has fielded two teams 3rd-6th is reportedly down to one team. Bentonville always seems to find talent in that area and will look to make a strong run in every division. Poteau always has a deep talent pool in every age group. The Black Diamond out of Sallisaw are always in contention. Another team has reached out to the Bi-State League to join, a travel team out of Alma, who is exploring the idea, just as the Pittbulls did in 1992 with the ARVFL.

The biggest change for Greenwood this upcoming season is the new jerseys. Since 2015, the Pittbulls fielded two teams under the names “Blue” and “Gray”. This season with the new look, they have brought back what was the third team name pre-2015. They are now Pittbull Blue and Pittbull White.

What does the future hold for the Pittbulls? From Danny Burton to Chris Climer and Clint Watson to Johnny McKusker, the organization has been in good hands. The main goal for the Pittbulls is to do everything to keep this program alive for years to come.

McKusker became the President with a limit of five years in 2016, they joked that they would change his start time to 2018. They are also looking to add board members to fill the spots, as the Stroziers will be leaving at seasons end. If anyone is interested in stepping up to the task, please reach out to them.

While teams all over the country complain and are hampered by a lack of community support, the Pittbulls have put on a master class as to how to become intertwined with the school and the community. From cheerleading and cheer clinic, to games and coaching assistance from the high school, there is something special about the Pittbulls. They are the foundation of preparing the youth of today for the adults of tomorrow through sport.