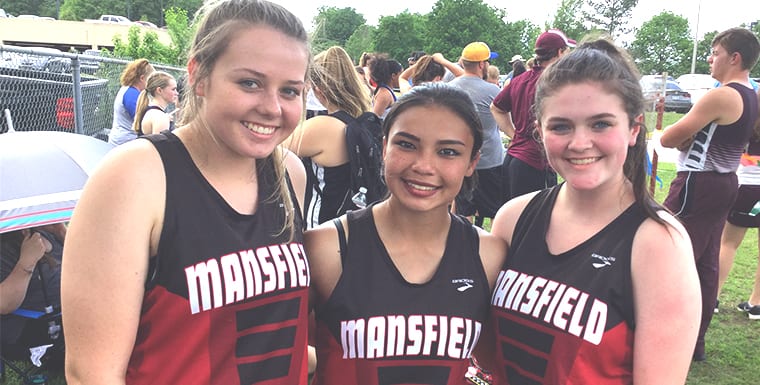 The total count was just north of 1,600 athletes. That’s how many participants signed up to compete at the prestigious Fort Smith McDonald Relays Battle with the Blades on April 20. Among the many was a small contingent of Mansfield track and field athletes.

Recognized as one of the best high school track meets in Western Arkansas, McDonalds welcomed teams from all over the state and Oklahoma. In addition, it was the location where several amputee athletes came to qualify for the para-olympics.

“It was quite a show,” commented Mansfield coach John Mackey. “For the most part our kids enjoy the atmosphere. It’s typically a hit to the ego and intimidating in many ways. But, we found many personal bests just trying to keep up.”

Such was the case as Mansfield’s women turned in at least 4 personal records over the course of the seven hour marathon track meet.

Distance dynamo Megan Rose accomplished a PR in the 1600m. The junior’s time of 6:10.25 was her best since entering senior high competition. Already this season Rose established new marks in her 800m and 3200m runs.

Thursday’s meet also saw a season best cooperative in the 4x800m relay. Rose ran the third leg. She was joined by Alyssa Berry, Lennon Woods, and Eden Jones. Their collective mark was 11:28.83.

Jumps specialist, Corrina Wesley, was excited to record an individual best in the triple jump. Her mark of 30’ 8.25” was her best product since this time last season.

It was at the Battle with the Blades in 2016 that Wesley upped her game with a individual triple jump record. A week later, she surpassed even that measure to win the 3A Region 1 West conference.

Woods, a freshman, moved up to the high school team the night after her junior high district competition. The move allowed the long legged distance runner a chance to join the senior high 4x800m squad, and run her first competitive 3200m run since cross country season.

Woods produced a personal best in the 8 lap two-mile equivalent. Her mark was 14:01.09. She ran a sub three minute 800m leg in the relay.

“It was a long, exhausting night,” said Mackey. “But, we needed the reps before conference. It was also only the second time this season our softball kids could fully participate in track.”

Clark had a solid schedule with four events. Her specialty at the pole vault gave Mansfield a ninth place jump of 8’ 0”. She went 29’ 0.25 in the triple jump. She also ran second leg in both the 4x100m relay and 4x400m relay.

Davis crossed the 300m hurdles in 59.43. It was the sophomore’s third time over the 8 barrier race this season. Each time she has shaved around a second off her total time.

Shoell was the lead leg on both the 4x100m relay and 4x400m relays. She was also scheduled for the discus throw. That event however was dismissed early because darkness fell before the long list of throwers could all get through.

Weaver was the only Mansfield discus thrower to get a try before the lack of lights canceled the remained of the event. She also got a shot put measure (29’ 4”) earlier in the evening when nearly 90 competitors pushed through the ring.

Sysakayavong managed a throw (27’ 1.5”) from the shot put circle as well. It came some two hours after the event started. The sophomore also ran the 100m dash.

Senior Eden Jones was the only Lady Tiger to actually score at McDonalds. She went 4’ 10” in the high jump to tie for fifth place. That jump came several hours into the meet after the senior ran a 2:38 split in the 4x800m relay and a ran soaked leg in the 4x100m relay.

The lineup of Shoell, Clark, Jones, and Audrey Walker was on the track ready for the start of the 4x100m relay when the skies opened with a rain shower. The brief ten minute downpour soaked the stadium with the the Lady Tiger sprinters in it. Then, the rain went away.

Walker ran the most events for Mansfield with heats in the 100m hurdles, 300m hurdles, and two relays.

Freshman Delilah McKusker, Janna Colin, and Daniella Santander also made the senior high trip 24 hours after their junior high conference meet. McKusker entered two sprint races. Coplin was entered in the discus before it was shut down. Santander pole vaulted.