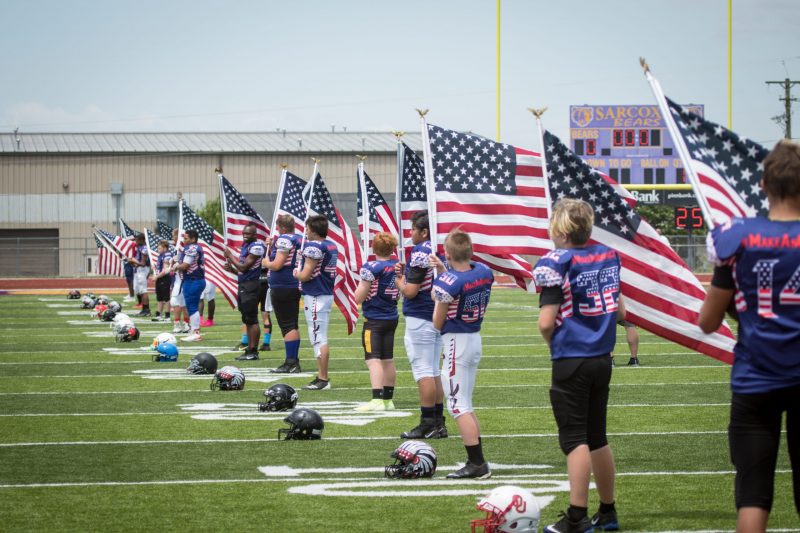 Impact Youth Football League in Northwest Arkansas gives local youth an opportunity to play in the spring and nationally.

The program started out of a want to make a difference for Northwest Arkansas youth football players, and it has grown into a monster all its own. League founder Shawn Gauthier had gotten his son into football as a way to spend more time with him. He soon saw some things he wanted to fix. “We just felt kids needed more. In the league we played in, kids wore the same uniforms for 4-5 years, helmets were outdated, no football was being taught, and we wanted to raise the standard,” Gauthier said. “I remember about a year in, a lot of the teams started doing new equipment, jerseys, etc. My wife asked me how I felt about it, I told her it was a win for the kids.”

While the idea for the Impact League was to have a fall and spring league, the allure for some of the teams to remain or join fall youth football leagues like the Bi-State League, West Central Football League, and Northwest Arkansas Youth Football League became apparent. Impact became primarily a spring football league, joining Texas and a hand full of others that had spring football.

Last season almost did not happen, but with a relax on Covid regulations in Missouri, the season was saved by all games being played in Sarcoxie, a town just to the east of Joplin. “It gave us hope of some kind of normal, the world as we knew it was changing and we wanted to give the kids a place where they could escape. School was gone. Friends were gone. Everything was being taken,” Founder Shawn Gauthier said. “We just weren’t willing to shut it down without a fight.”

Looking at the landscape of football within the state, the River Valley, and NWA, it is easy to see that there is talent all over on Friday nights. But just how many are making it to the next level? How much of the area is being overlooked for talent in Texas or Georgia? The answer is astonishing.

The Morning Rush on ESPN Radio touched on this on Dec 17, when they discussed with a caller that it starts in youth sports. The caller mentioned Greenwood’s investment in the youth program as being what other schools needed to look at doing. Several schools opted this past fall to organize teams under AAO (Arkansas Athletes Outreach) to implement their offense and philosophies to create feeder programs. Gauthier was also mentioned as someone trying to change the landscape of football in the area.

The extra games for the kids have paid dividends for local programs as they enter Junior High and High School programs in the River Valley and Northwest Arkansas. Longtime Center for Gauthier, Hunter Marshall from Farmington was listed as a Sophmore to watch in 2021. Class of 2026 QB Kane Archer has played in the Impact League since 2018 under Pocola High School Head Coach Jason Parker and going on three seasons with Gauthier. He enters the fall season for the Greenwood Bulldogs as an 8th grader, coming off a 2020 season playing QB for the 7th grade and limited 8th grade.

“Honestly those kids were destined for greatness because they had the work ethic before we ever got them. As much as I’d like to take credit, the reality is they made me better,” added Gauthier.

There are other current or former Impact athletes area schools are looking to make a splash with. Those include:

“We preach leave it better than you found it and those kids played the game the right way every time they took the field, as a coach there’s nothing more you could ask for,” Gauthier continued.

The idea of travel sports is not lost on the River Valley, given the number of travel baseball and basketball teams hailing from Greenwood and neighboring cities. In Arkansas, the idea is still relatively new. A few teams in Little Rock and Northwest Arkansas within the AAU program, which were led by Reggie Swinton (Lions) and Steve Conley (Hawks), were the ones known as travel teams early on.

The Impact League has opened the door for teams from as far as Louisville, Kentucky and St. Louis to have a place to play in the spring and get their teams some much needed extra work. This year, in the 14U division, it is no different. Three teams out of St. Louis, one out of Lawton, OK, and the Arkansas Dawgs look to compete for the top spot.

The League has also given their athletes a chance to play for National Championships in the fall at the American Youth Football (AYF) and Battle Youth National Championship. The days of Pop Warner seem to have been taken over by AYF, Battle, AAU and a couple of others, as national youth football begins to steamroll into the youth sports lexicon. In a recent game with the 13U Arkansas Elite Dawgs and the War Eagles out of Kansas City, 16 players were current or former members of the Kansas City Outlaws (Battle Runner-up) and St Louis BadBoyz (AYF). Six being on the Dawgs team and ten on the War Eagles.

Something else Gauthier has implemented, showcases for the athletes to come and play in a relaxed setting. So far the Impact League has put on two Showcases and have received great reviews on the cost and game play. “With these Showcases, we want to raise the bar and cause people to lower their prices and give these kids a reasonable shot” stated Gauthier.

The events so far have been held in Centerton, AR and Chickasha, OK, with a third at the end of June to be held in Tulsa. Look for Impact Summer Showcase on Facebook for more information.

This spring season promises to bring out the best in the athletes and showcase local talent while building them up for the next level. To get more information on the spring football league, to bring in a team, or find a team for an athlete, contact Shawn Gauthier on Facebook.