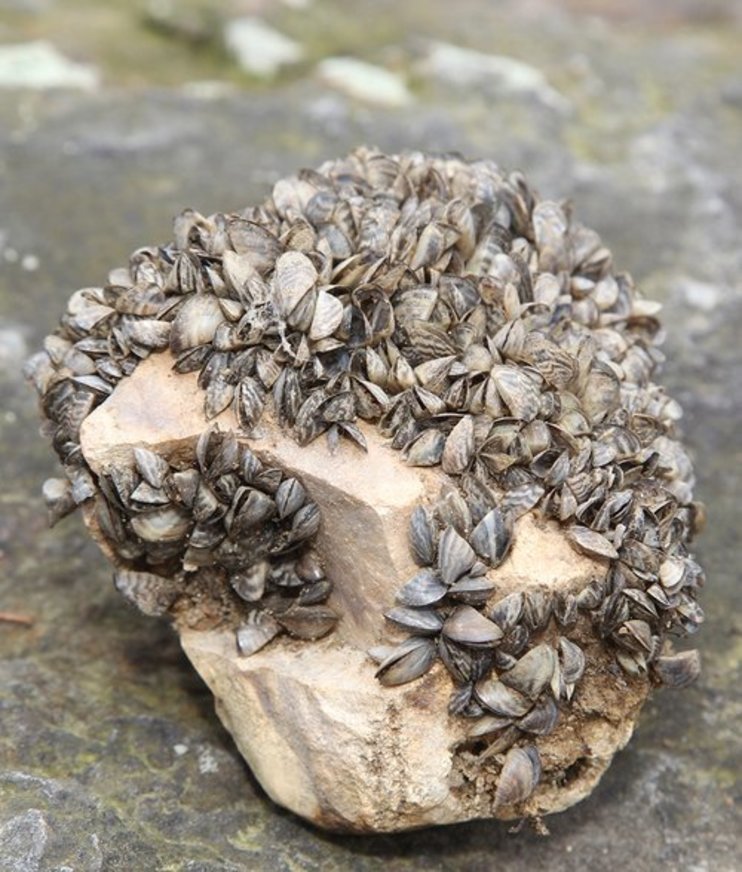 Thanks to the watchful eye of marina operators at Cricket Creek Marina on Table Rock Lake, a boat carrying invasive zebra mussels was prevented from launching and spreading these harmful nonnative mollusks into a new body of water.
The incident occurred May 24 when a houseboat that had been docked at Bull Shoals Lake was being moved into Table Rock Lake. The marina operator stopped the vessel from launching after observing zebra mussels attached to the boat. The marina operator quickly notified an Arkansas Game and Fish Commission enforcement officer, who informed the boat hauler that the vessel transported from Bull Shoals Lake could not be launched into Table Rock Lake until it was cleaned, allowed to dry for 10 days and passed a thorough inspection. The houseboat transporter also was issued a citation for the illegal transport of zebra mussels. On June 3, fisheries biologists with the Missouri Department of Conservation and AGFC completed a comprehensive inspection before approving the boat’s launch into Table Rock Lake.
The first confirmed discovery of zebra mussels in north-central Arkansas occurred in 2007 in Bull Shoals Lake near Lead Hill. Although zebra mussels are now prevalent in Bull Shoals Lake, there has been no official documentation of them in Beaver, Greers Ferry, Norfork or Table Rock lakes. Other locations where zebra mussels have been documented include the Arkansas, Mississippi, St. Francis and lower White River, below Bull Shoals Lake in the White River, Plum Bayou and Bayou Meto.
The AGFC has some easy-to-remember recommendations everyone should follow to reduce the risk of transporting zebra mussels from infested waters: Just clean, drain and dry your boat, motor and trailer. First, remove all drain plugs from your vessel at the boat ramp and allow all water to drain from the vessel. This requirement became law in 2020. Second, inspect your boat, livewell, trailer and motor and remove all debris, mud and vegetation. If possible, boat owners should wash their boats and trailers with high-pressure hot water. Finally, clean all livewells, bilge pumps, ballast tanks and other areas that hold or pump water in addition to exterior surfaces. Once completed, allow the boat and trailer to dry. These few steps will help ensure other water bodies don’t become infested with zebra mussels.
If you discover zebra mussels on your boat or equipment, please contact the AGFC’s Aquatic Nuisance Species Program coordinator at 501-747-9012 before transporting the boat or infested equipment. Transport of zebra mussels in Arkansas is illegal and transporting them across state lines is a federal offense.

* Lake Wapanocca, located in Wapanocca National Wildlife Refuge in Crittenden County, suffered a recent fish kill, according to the AGFC Fisheries Division. Staff visited the lake after receiving a call from the refuge manager. The kill was caused by extremely low dissolved oxygen levels following heavy rain on Sunday, June 26th. By the following Wednesday, the kill did not appear to be ongoing and oxygen levels in the main lake had recovered to normal levels. However, oxygen levels in areas out of the wind and in the timber were still low.
The crash in oxygen was likely caused by heavy rain that flushed organic material into the lake after an extended dry period. This organic material became suspended and started to decompose, which uses up oxygen. Biological oxygen demand is high during this time of year and it does not take long for problems to occur.
Fisheries staff based in Brinkley say they plan to sample the lake this fall to determine whether supplemental stocking will be necessary to help rebuild the population. However, the add, with the windy weather around the time of the fish kill it is very likely that other fish were able to find refuge in the more oxygenated main lake and the lake will repopulate naturally.