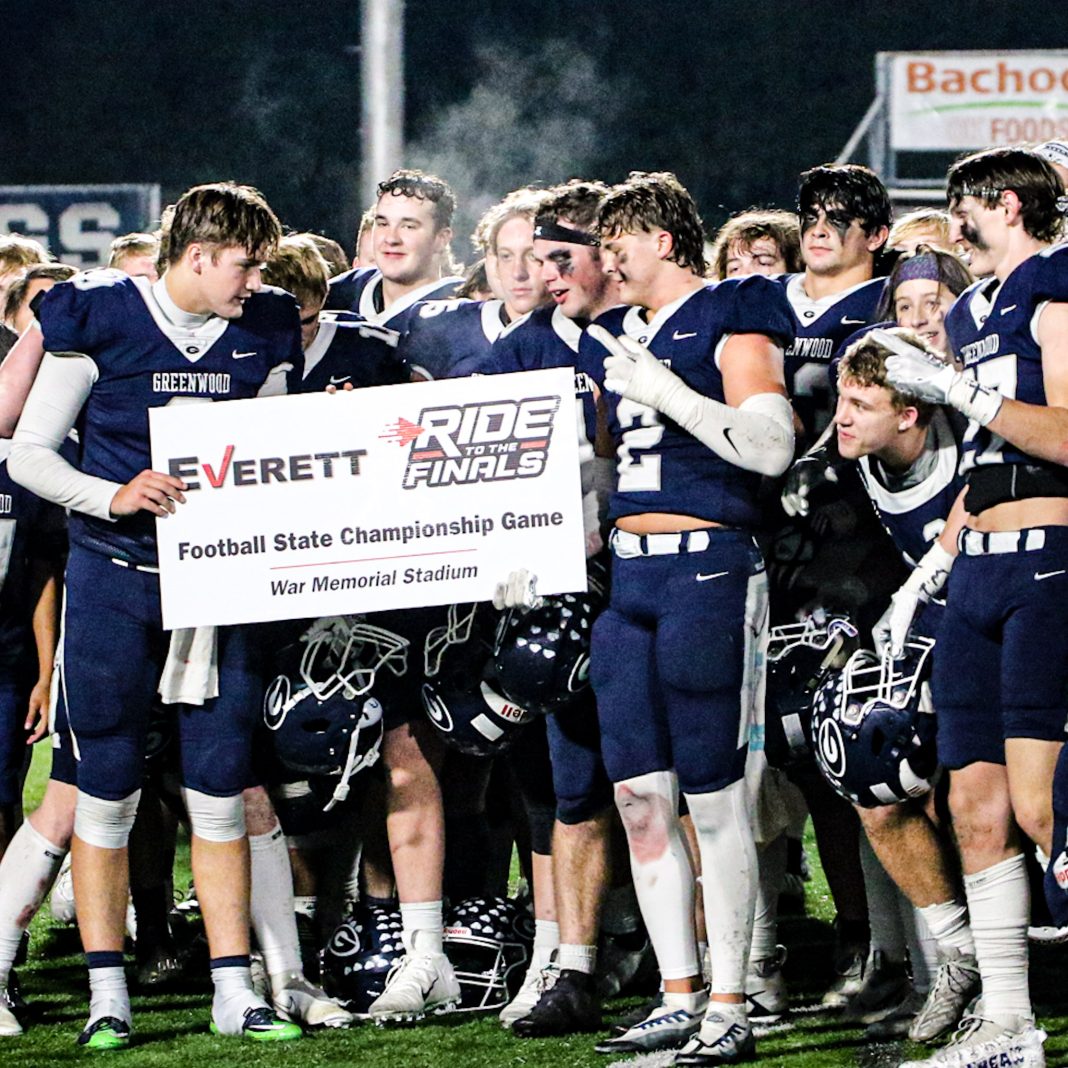 The Class 6A State Championship will be decided this Saturday at 6:30 as the Greenwood Bulldogs take on the Pulaski Academy Bruins.

A combined 20 Football State Championships, 10 each all won since 2000. Two tradition rich programs. One known for producing Razorbacks with names like Wilson, Morgan, Noland, and Holt. For being FasDogs during the summer. The other being known the world over through articles and documentaries about their unorthodox approach to special teams and unworldly numbers in the passing game. Both with legendary coaches that joined the college ranks and promoted within. One coach with a legendary last name that has blazed his own path and been a part of all of the schools 10 State Championships. The other coach a Razorback receiving legend. Both Coaches won State Championships in their first year. Two programs vying for one thing, the 2022 Class 6A State Championship.

When looking at Arkansas High School Football programs in this century that is still young at 22 years, it is hard to escape the two that are the Greenwood Bulldogs and the Pulaski Academy Bruins. Two teams that as mentioned above have won 20 State Championships together. It is also interesting to note that they have only met once before in the State Championship. More on that in a few sentences or paragraphs.

This Saturdays matchup is just the 6th time these two have met. A week 9 game against Pulaski this season saw the Bulldogs coming out on top 33-23. Before you start getting excited, Pulaski’s starting QB went down early in the game followed by Hunter Houston leaving the game as well. The stout Greenwood defense and Freshman QB Kane Archer were able to come away with a 10 point victory. Kel Busby and Hunter Houston are healthy and look poised to lead their teams to hoisting the trophy written in gold on Saturday evening.

This is Greenwood’s mind boggling 16th trip to the State Championship game dating back to 1996. What happened for Greenwood to becoming a perennial favorite year after year.

1996 – Watson Chapel 35-13 Loss: Sophomore QB Brooks Coatney led the Bulldogs to their first State Championship game after game winning touchdown in the fog at Smith-Robinson against Malvern. A talented receiving corps with National Record holder Kris Weible and tough running back and future Razorback Tatum Owenby, were no match for the running back duo of Watson Chapel’s Ron Johnson and Bobby Jett.

2000 – Hope 30-2 WIN: At the time Greenwood posted the largest margin of victory with rout of the Hope Bobcats. First drive of the game one of the Hope defenders would snag Josh Bell’s jersey and spin him around hoping he would go down, Bell would score a TD on that play setting the tone for the rest of the game. Josh Bell would become the MVP of the game after getting a unanimous vote. Head Coach Ronnie Peacock would get that elusive State Championship then take a job at Rogers High School.

2004 – Wynne 28-26 Loss: This was Head Coach Rick Jones’ first trip to the Arkansas State Championship after a successful run in Broken Arrow, OK. Coach Jones took over a program that went 23-11 under Harv Welch from 2001-2003. The game foreshadowed what was to come for the next 15 years with Coach Jones at the helm. The ‘Dogs would let Wynne score to give them the ball back with enough time on the clock to set up a game winning drive. They would get the TD and then go for two when Daniel Stegall would throw to future Razorback Lucas Miller, but it would go through his hands.

2005 – Morrilton 35-32 WIN: Redemption. The Bulldogs march back to The Rock with William Ridener winning the State Game MVP. Daniel Stegall would be the first player in Arkansas history to rush for 1000 yards and pass for 2000 yards in back to back seasons.

2006 – Pulaski Academy 56-55 WIN: This was Greenwood’s version of Miracle on Markham, well it would be one of the first of those. This is was just the beginning of what would be two teams at the beginning of their dynasties. Tyler Wilson would throw for a crazy 563 yards in the game. Cornerbacks Coach and Freshman Center Assistant Principal Travis Sandifer was a junior on that squad.

2007 – Little Rock Christian 27-6 WIN: The win avenged a 44-7 loss in the regular season to LR Christian. Greenwood would beat Pulaski Academy 57-50 in the Semi-Finals to earn a trip to War Memorial. Tyler Wilson would be named State Game MVP, to complete the Three-Peat

2010 – Camden Fairview 36-35 WIN: Another Miracle on Markham moment. Greenwood was down with two minutes in the game and was able to score 15 points in that time span to win the game, start the second three-peat and score the 10th win in the 50 game win streak. Current Co-Offensive Coordinator Stephen Hogan was the QB for Greenwood that year throwing for 2,888 yards.

2011 – Batesville 53-11 WIN: The ‘Dogs had to overcome a 21 point deficit in the Semi-Finals against Camden Fairview to get a shot at the Rock. Their 24th win in a row was a dominate one for the Championship with future Razorback Drew Morgan. This was the last Championship in Class 5A.

2012 – Pine Bluff 51-44 WIN: With the move to the hybrid 6A/7A Greenwood did not skip a beat. Jabe Burgess would take the helm of the Bulldogs following in the steps of cousins Brooks Coatney and Tyler Wilson. The 38th win in a row would give Greenwood a second Three-Peat. In their bid for a 4th consecutive State Championship and 51st victory, Pine Bluff would become the spoiler the following year kicking a last second Field Goal ending the Bulldogs 2013 season.

2015 – Pine Bluff 28-21 Loss: Those pesky Zebras, but this Greenwood team was not short on talent itself. Two future Razorbacks in Senior Grant Morgan and Sophomore Connor Noland. Future UCA Bear QB and Head Junior High Coach Luke Hales, another future UCA bear in Sophomore Kenny Wood. This was the first of 4 trips in a row for the Bulldogs.

2017 – Pine Bluff 52-14 WIN: 26 Seniors went into the season looking to turn around the last two years of coming up short. Connor Noland would pass for 2,801 yards and 34 Touchdowns en route to an undefeated season. Noland and Jon Womack would sweep the Farm Bureau Insurance Class 7A/6A Offensive and Defensive players of the year.

2018 – Benton 45-14 WIN: After an early season loss to Northside, Greenwood’s defense took charge and got two shutouts, two one score games, and three two score games. Just as Coach Jones had done previously, Receiver turned QB Peyton Holt would show how much of a game changer he could be. A spinning TD in the state game, coupled with a one handed catch by Lazaro Angel sealed the deal for the Bulldogs and their 9th State Championship. Coach Jones would coach one more season at the school in South Sebastian County. Greenwood’s shot at a 5th trip in a row to the State Championship in 2019 was stopped short in Searcy.

2020 – Lake Hamilton 49-24 WIN: Number 10. Coach Chris Young was promoted to Head Coach as Coach Rick Jones took a position at the University of Missouri. Shortly after taking the position the world nearly came to a halt and the fall season was put in jeopardy due to Covid. The schedule took a few turns with Northside and L.R. Parkview having to cancel due restrictions. In their place Springdale Har-Ber and Bentonville West in their place. The Greenwood machine never stopped. In the state Championship Greenwood did start slow going down 10-0 but then rallied back on the performance of State Game MVP L.D. Richmond and Current Arkansas Tech players Jayden Jasna and Hunter Wilkinson. Jasna would set a State Championship game record with a 98 yard Kickoff return.

2021 – El Dorado 27-17 Loss: Going for one State Championship is tough, going for 11 on your 15th trip…. The expectation is easy to figure out at Greenwood, they are going to come home with a trophy at the end of the season. The Senior laden El Dorado proved to be Greenwood’s Kryptonite in their chance to get another Back to Back Championship. Hunter Houston would go out due to injury and the now Elkins QB Slade Dean stepped in and almost pulled off the win. Two Turnovers in the 2nd half kept Greenwood from winning their 11th and had to watch El Dorado hoist the Gold Trophy.

There you have it 15 trips. 10 wins. Legendary names. Legendary Games. If history is any indicator Saturday nights game will add to the lore of both Greenwood and Pulaski Academy.