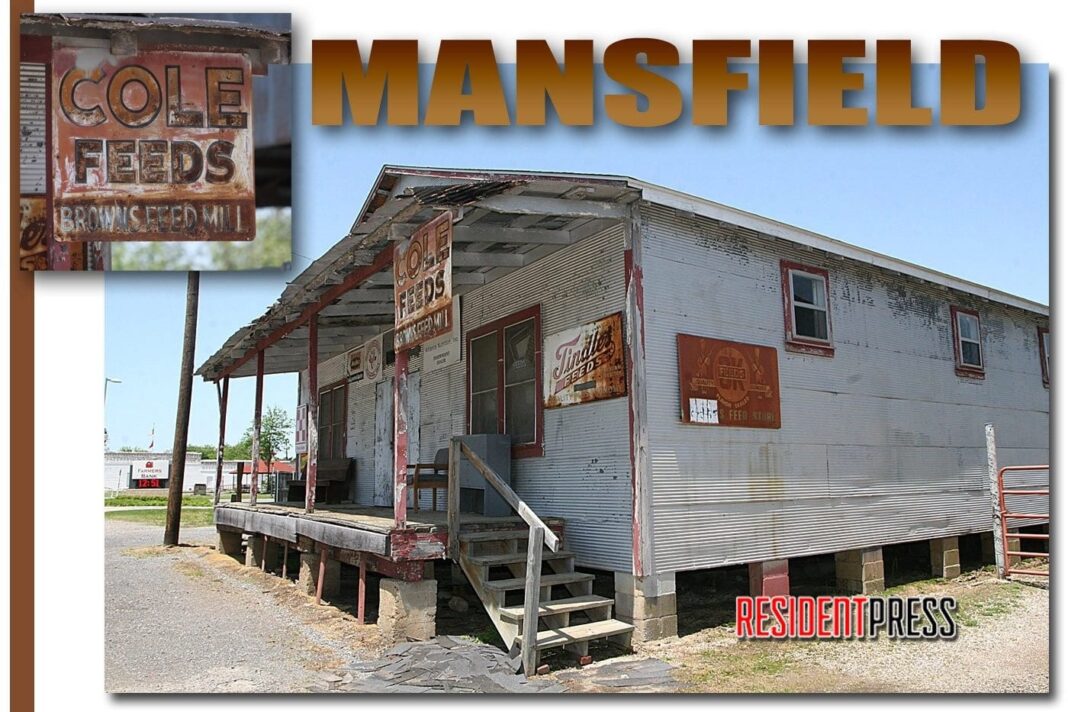 In every community, there is a meeting place; a spot where all the older men meet and greet each other to share the latest news, a recent coon hunt or reminisce about the past. In Mansfield, that was Johnny Brown’s Feed Store.

Johnny was born on January 31, 1921. His father, Grover Brown, was a Mansfield businessman, owning two cotton gins from 1890 to 1932. Johnny’s grandfather, John Calvin, came to America by stowing away on a ship from Switzerland at the age of sixteen.

Johnny Brown opened his first feed store in Mansfield in 1950 in a brick building across from the Roy Cross Lumber yard. (That building is gone).  He ran a creamery in the store too, with people like Bobby Traylor’s family who were one of the families that brought cream to feed store. In 1964 the feed store was moved to the building it occupied until the business ended.

The Feed Store was an adventure to behold.  As you drove up to the loading dock/front porch, you notice all the trucks that were parked around the store and in the parking lots of neighboring buildings.  You’d think that something big was happening, and there was: it was Saturday morning and it was time to gather at Johnny Brown’s.

Walking up the heavy worn wooden steps led you to the loading dock of more worn wood and the corrugated sheet metal (tin) store front.  All kinds of metal signs adorned the frontage, advertising major feed sellers like MFA, OK Feeds and Tindle Feed.  From the moment you stepped out of your vehicle, men would call you by name and begin teasing with you about something.

There are two things I remember as I would enter the double doors into the store: the breeze that come completely through the warehouse would almost knock you down and the wonderful smell of animal feed.  A long and wide path went from front to back and all sorts of feed for any animal that was being raised in the county was stacked in neat rows from the path to the outside walls.  On the right of the entry was a collection of anything a farmer may need hanging from hooks, nails or from the rafters that exposed the unfinished ceiling to the sheet metal roof above.  A wooden cabinet with open bins held some of the feed as well.  If you needed a fifty-pound bag of chicken feed, Johnny or one of his employees would take it to your truck or to the loading dock.  But if you needed just a pound or two of chops for your chickens, paper bags were there for you to fill with a metal scoop.  A scale hung nearby for you to weigh your filled sack.  Johnny took your word that it was what you said.  Johnny would take off in his big red truck and go after special feeds from Joplin or Springfield, Missouri or over to Muskogee, Oklahoma.

On the left of the front entrance was Johnny’s office.  A dated Coca-Cola machine guarded the door into the inner sanctum of Johnny’s business. Tall counters with slanted tops made it easy to write the tickets.  An old cash register rang loud bells when Johnny pushed the appropriate key down and the cash drawer popped open. An old oak office chair was against the double windows that looked out toward the activity on the porch.  The office was chaos.  Nothing was organized yet he knew exactly where everything was. Johnny would tease his customers just like the men outside would and expected to be teased back.  He called me “Little Jack” since my father was also named Jack.  All girls were called “Little Ladies.”

He loved to be with people and loved kids. The big overalls he wore contained a big man with a big, compassionate heart. He was also a practical joker.  He and a buddy Willis Harrison placed persimmons in a very large glass jug.  They filled it with water and added some orange food coloring.  Johnny made a sign for the jug that said, “DO NOT OPEN!  Making persimmon beer!”  Three of the town’s church ladies chastised him for making his “beer.”  It wasn’t long before he got a call from two of the women wanting the recipe!

Johnny Brown was a Masonic Mason of Reid Lodge # 163 F&AM, a Fire Chief and of the Methodist faith.  When he passed away on March 27, 1993, the heart of the feed store died with him. A couple of businesses have been in the building but it sits empty today on Mansfield’s main street, reminding us all of the wonderful times we had there.