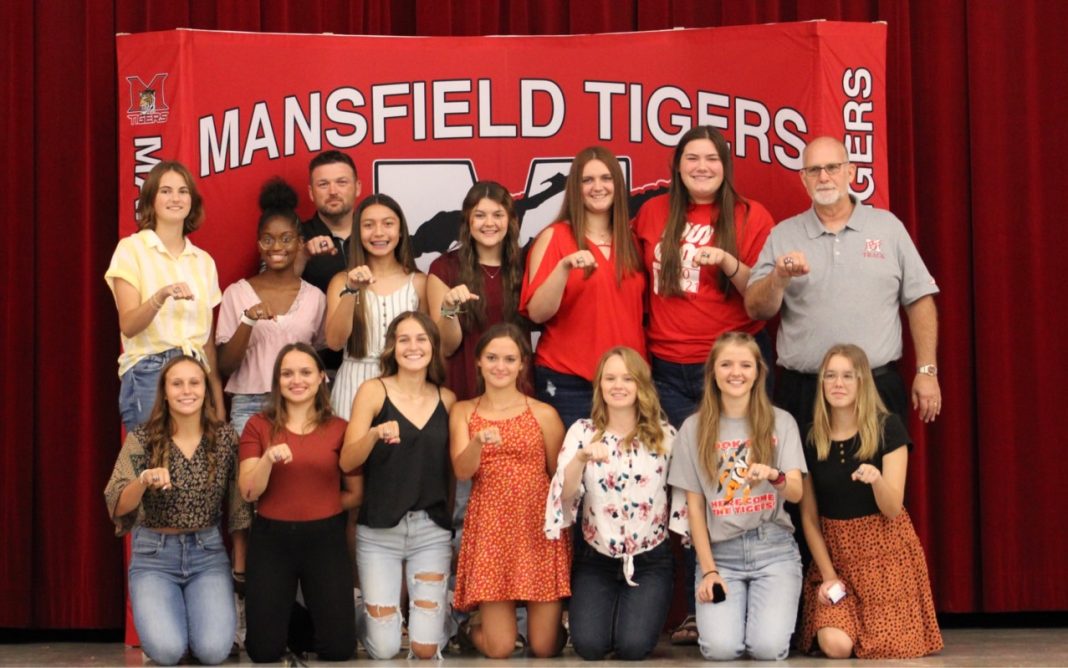 On the last weekend before the new school year was set to begin, the 2022 Indoor Track State Champions closed this past school year with a ring celebration.

Members of the Mansfield Lady Tiger track team received their long awaited championship rings on Saturday night in the presence of family and friends. Neatly tucked into the final date before the new school calendar rolled over, the intimate reception offered attendees their first look at the program’s thirteenth overall state ring.

“It was good to see everyone again and compare notes,” said 2022 homeschool graduate and Mansfield distance runner Darby Jones. “This was the first time we’ve all been together since the outdoor state finals. The end of the year was crazy with all the graduation stuff. It was good to get back together and celebrate.”

In February, Mansfield’s senior girls track team scored 183 points at the Arkansas Track Coaches Association Indoor State Finals. The total produced by a roster of 16 players outpointed the nearest competition from classes 1A and 2A by 65 points. The results overwhelmingly pushed the Lady Tigers to the top of the podium at the University of Arkansas hosted event.

“This group of seniors in particular have been so close to winning the big one,” stated Mansfield head coach John Mackey. “The core group were full time runners moving from cross country to indoor to outdoor year after year. Twice they made it to runner-up status at the cross country finals. In 2021, we had a legit state track contender but the ATCA canceled the indoor finals because of Covid. So, we’re really happy 2022 gave this team its shining moment.”

The players and coaches gathered at the high school cafeteria on August 13 to officially receive their champion’s prize. After a meet and greet gathering that offered free food and drink sponsored by the MHS Track Boosters, the people in attendance viewed a short highlight tape honoring the recipients as part of the buildup to the actual ring distribution.

As the video production completed, Mansfield Co-Athletic Director Tim Cothran, who also serves the city as a reserve officer, brought in the rings. Carrying the accolades in a locked black briefcase ala Blues Brothers, Coach Cothran in all black police attire delivered the rings to the stage.

Voice of the Tigers, Travis Pettus, introduced special guests Dave Otto of the Track Boosters and Roger Thompson of Farm Bureau Insurance. Each along with Cothran assisted in the presentation of the state rings to the team members.

“As the Blues Brothers say, it’s always good to get the band back together,” quipped Mackey. “These girls did a lot for Mansfield. They deserved recognition. With production delays and other circumstances we had to push this thing to late summer. We are thankful for the people that came, and for the sponsors that contributed.”

The team wanted to express their appreciation to West Fraser, Today’s Bank, Chambers Bank, Roger Thompson, Dave Otto, Tim Cothran, and Travis Pettus for their support. They also wanted to acknowledge the parent committee that engaged in the decorations, refreshments, and cleanup.