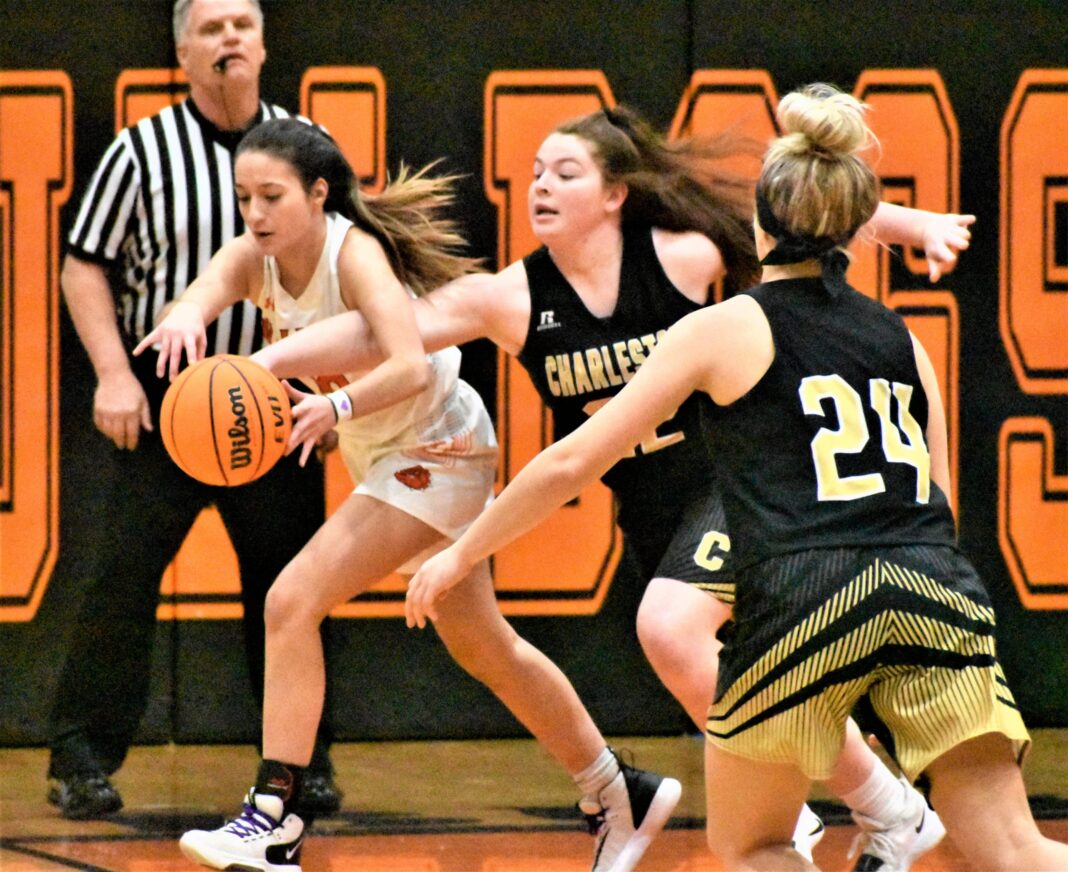 Charleston traveled to Waldron on Friday night for a pair of important Class 3A conference games with the Bulldogs. The Lady Tigers went into the game 11-0 in conference and were looking to improve their record and guarantee themselves no worse than a share of the conference championship. The Tigers boys team also entered the game undefeated in conference play, just one game ahead of Waldron. The Tigers defeated Waldron at Tiger Center by the score of 82-51 on January 18. Put all of this together, along with a raucous home crowd in Waldron, and the setting was perfect for an exciting night of high school basketball.

In the first game, the Charleston Lady Tigers got off to a slow and sluggish start and maintained a small lead going into the first half. In the second half, the Lady Tigers were able to shut down the Waldron offense and the Lady Tigers went on to a 39-25 victory. With the win, Charleston improves their record to 12-0 and has a two game lead in the conference standings going into the final week of the regular season. If the Lady Tigers can win at Mansfield on Tuesday night, Charleston will win the conference title and will go into the senior district tournament as the top seeded team in the tournament. As of the publication time of this story, the girls conference standings are:

Charleston entered last week as the 31st best team in Arkansas across all classifications, according to Max Preps. The Lady Tigers are ranked 5th in Class 3A, behind number one Mountain View, number two Hoxie, third ranked Valley Springs, and fourth ranked Lamar. Charleston is 21-2 overall this season.

The Charleston boys team also entered Friday night undefeated in conference play and were looking to extend their lead to two games over Waldron. Waldron, still smarting from the 31 point loss to Charleston earlier in the year, had won its last six games entering the game. Mix in the stellar match-up between two great high school players, Payton Brown of Waldron, and Brayden Ross of Charleston, along with a packed house in Waldron, and you had the perfect setting for a great high school basketball game. And that’s just what it was.

Waldron came out of the blocks fast and took it to the Charleston defense early. The Bulldogs guards were able to penetrate the lane for easy baskets, as well as hit key outside shots. The Tigers fought back, but could not keep pace with Waldron, as the Bulldogs amassed a nine point lead at the half.

In the second half, it appeared that Charleston’s Brayden Ross was going to put his team on his back and carry the Tigers to victory. By the end of the third quarter, the Tigers had reduced the Waldron lead to just one point.

But in the fourth quarter, Waldron battled back to maintain a small lead. Ross continued to hit one crucial shot after another, but the Tigers could not complete the comeback. Experiencing foul trouble as well as fouls at key points of the fourth quarter, the Tigers were not able to pull out the victory over a very good and inspired Waldron team. Both coaches expressed their displeasure with the officiating, as it often happens in a hotly contested game, and it fueled the crowd.

Waldron won the game by a final score of 70-62 and vaulted themselves into first place in the conference with the victory over Charleston. As of the publication time of this story, the boys conference standings are:

After the victory, Waldron has a one half game lead over Charleston. The two teams are tied in the loss column, but Charleston has played one less game than Waldron due to the postponement of their game at West Fork that was re-scheduled to a later date due to severe weather. The make-up game with West Fork is now very important for Charleston to keep themselves in a tie with Waldron for the conference title. If the two teams remain tied at the end of the regular season, they will share the conference championship and the top seed in the district tournament will be determined by a point differential tie breaker. With games remaining next week, it is too early to talk about the tie breaker, but if it does come into play, Resident Press will update its readers on the tie breaker ramifications for both teams.

Both Charleston and Waldron are very talented teams who will undoubtedly meet later in the district, regional, or even state tournaments. The interesting fact for both teams is that the path to a state title will go through both schools. Waldron is the site for the district and regional tournaments, and Charleston is the site of the state tournament. Both schools, if they hope to win at the state level, will have to win significant away games on each other’s campus. And if last night was any indication of how those games will go, it should be an exciting time for the fans of both schools.

The upcoming post-season will be full of excitement, color, and pageantry, and for basketball fans, the time period of February through mid-March is the best time of the year! Stay with Resident Press for complete Class 3A coverage all the way through the state finals and the crowning of new champions in Hot Springs!