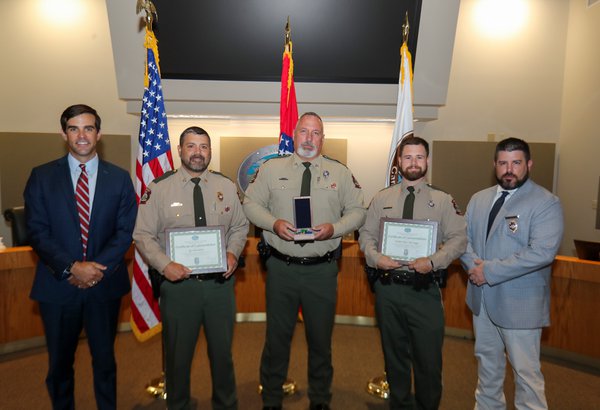 Twenty-five Arkansas Game and Fish Commission enforcement officers and a K-9 were recipients of the division’s top honors Thursday at a special presentation held at the AGFC Headquarters Auditorium in Little Rock.

This was the first award ceremony for the AGFC Enforcement Division since 2019, as the last two years were suspended because of COVID-19 protocols. Awards were presented by AGFC Director Austin Booth, AGFC Enforcement Chief Col. Brad Young, Major Nakia Crims and Major Brian Aston.

“Duty is a calling, it is a heavy burden, and it is an honor,” Director Booth said. “It is one of the greatest privileges that I have to say that you wear that duty not with self-pity or martyrdom, but you wear it well. You wear it with excellence, with commitment to everyone else in this agency. Today is about celebrating not only these officers, but the entire Enforcement Division and the impact it has on law and order, the impact on public safety throughout the state, and most importantly the impact it has on conservation.”

Cpl. Mac Davis received two Warden’s Stars for separate events in which he showed unfaltering courage in the face of adversity. In March 2020 at the assistance of local law enforcement agencies, he located and apprehended an armed assailant in Scott County who was wanted in connection with an assault on a police officer with a firearm. He acted quickly to subdue the subject as he was reaching for a loaded firearm in his pocket. Davis’ second Warden Star recognition came from his swift action in rescuing a woman whose truck was swept off a bridge during a flood event in Scott County in September 2021. During the rescue, Cpl. Davis waded into the swift water to the nearly submerged truck, removed his own life jacket and gave it to the flood victim who stated she could not swim well. Once assistance from other officers arrived, he was able to put on another life jacket and work with the woman to get her to safety using a rope line before finally crossing the swift water again to make it to safety. Sgt. Brian Bailey and Wildlife Officer Tyler Staggs also received Certificates of Commendation for their work in this emergency situation.

Davis assisted in a separate flood event, this time in January 2021, but it was Sgt. Brian Bailey whose actions merited a Warden’s Star recognition. During the flood a driver had  attempted to cross a low-water bridge and the car was swept away with three people inside. While two occupants were able to get to safety, a 13-year-old boy had climbed into a fallen tree and was stuck in the near-freezing water. Although they were able to get him a life jacket and safety rope, the boy had been exposed to the cold water for so long that he was unwilling to enter into the swift water to cross to safety. After being tied in with a safety line to other rescuers, Sgt. Bailey waded into the swift water and grabbed the young man. Both were pulled to safety and to an emergency medical services crew. Cpl. Davis received a Certificate of Commendation for his role in the event as well.

Cpl. Ray Hines and Wildlife Officer Chris Crawford also received Warden’s Star recognition, also for a swift water rescue. In June 2020, flash flooding in Polk County had swept a vehicle 200 yards from a bridge. The officers found the individual’s vehicle, which was completely submerged. The occupant had managed to get to a nearby tree, where he was clinging for his life. Officers Hines and Crawford swam to the distressed man, secured a life vest to him and a rope to the tree he was in, and safely guided him to shore.

Wildlife Officers Cody Stone, Jake Stanford and Clint Park also received the Warden’s Star for their fast thinking and response to a near tragedy when an 8-year-old boy and his father were swept into swift current on the Buffalo National River. The trio was conducting swift-water rescue training with other officers, enforcement cadets and Van Buren County Search and Rescue. The boy was swept away by the current, and his father jumped in to save him only to be pulled into the swift water himself. Officers Stone, Stanford and Park jumped into the water while Wildlife Officer Kent Slape threw a rope to the individuals. Once they reached the individuals, Stone, Stanford and Park used the rope to pull them to safety. Officer Slape and Wildlife Officers Eric Rawls, Stephanie Carter, Renner Smith, Caleb McClanahan and Doug Martisek also received Certificates of Commendation for their actions in rescuing the two individuals.