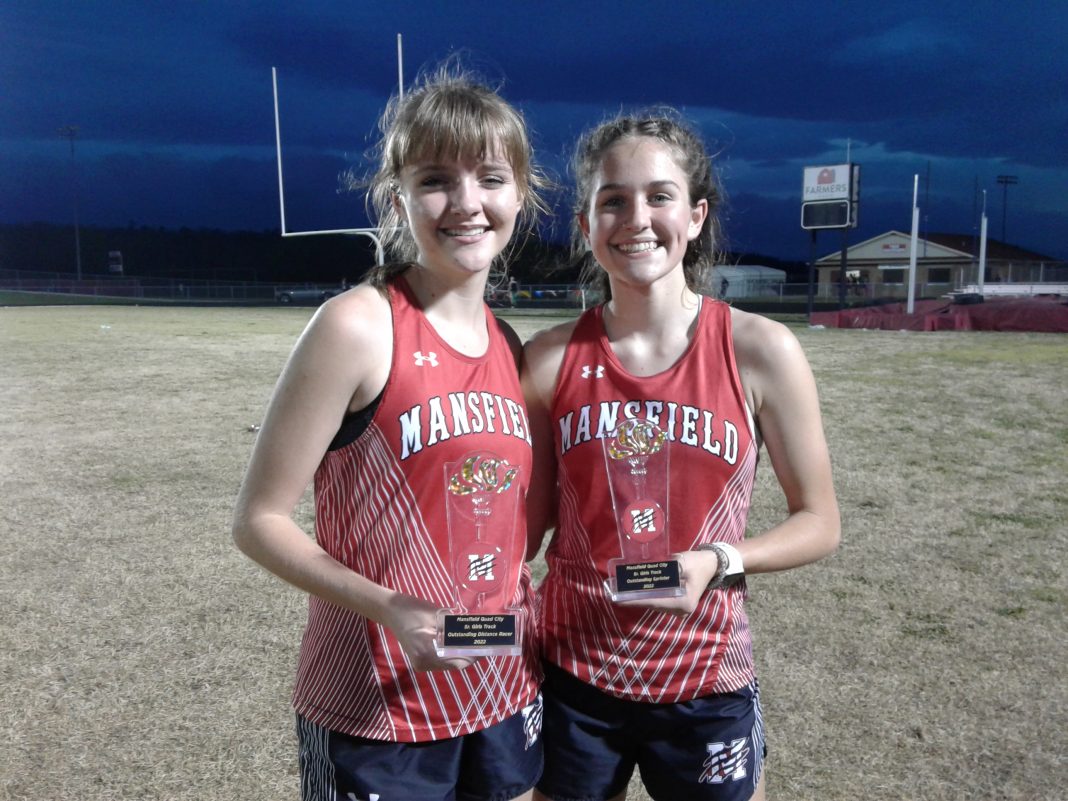 On April 12, Mansfield hosted an intimate track and field event for a core group of eight schools. The mission was to allow attending schools access to a state qualifying meet while also offering the ability to enter four athletes per event.

Count it mission accomplished, at least for the host Mansfield Lady Tigers.

The Mansfield senior high squad got to enter a full lineup for only the second time this outdoor season, and earned two more state qualifiers in the process.

MHS participants Jadelynn Wood and Seven Sanderson each met pre-qualifying standards to earn early entry into next month’s state championship. Wood did so by running a career best in the 300m hurdles. Sanderson did equally as well with a personal record in the discus.

“This meet has become a cozy little meet designed for individual success,” said Mansfield coach John Mackey on the format of the Quad City Meet. “There were no team awards or total points accumulated. This gives players a chance to concentrate on their individual games and go for some qualifying marks.”

Sanderson was the first Lady Tiger to reach standards on the night. Already qualified in the shot put as a result of the previous week’s Gaile Hainley Relays, the junior home-school athlete surpassed the minimum mark in the discus. Her 96’ 1” measure easily overtook the 89’ 6” standard for class 2A.

Wood was next in line as the junior hurdler pulled away from a small heat to run the 300m intermediates in 51.33 seconds. That mark squeaked by the AAA distinction by a narrow eight-hundredths of a second.

“Jadelynn was determined to get this done,” confessed her coach. “She has been getting more confident. She’s been attacking the hurdles with a real purpose each consecutive week.”

Four specially designed awards went out for individual achievement in four different disciplines at the conclusion of the meet. Along with the previously mentioned plaques, there were also awards for Outstanding Jumper and Outstanding Distance Racer.

Four identical awards were also handed out in the men’s rankings.

Acorn’s Caden Tarkenton won the Outstanding Distance Racer award for his first place mark in the 800m run. Tyler Wright of Waldron took home the Outstanding Sprinter plaque with wins in the 100m and 200m dashes. Brevyn Ketter of Charleston was named Outstanding Jumper with a six foot high jump. Charleston teammate Dale Smith was the Outstanding Thrower by displacing all shot putters by over a six foot margin.

Mansfield’s Brooklyn Adams neared the discus qualifying mark in her second meet of the year. The full time softball player came over to the track meet in hopes of a significant heave in the discus.

The junior did throw well taking second in the event. Her measured toss was just shy of the state standard at 88’ 6”.

Lady Tiger Sadie Roberts was a highlight in the high jump event. The senior, who has already pre-qualified to state at two different meets, cleared 5’ 0” for the first time this season to win that event.

Tyler Escalante and Peyton Martin showed out for the Tiger men in the sprints. Escalante peeled back an 11.97 finish in the 100m dash. Martin crossed at 12.20 in the same race. The pair ranked third and sixth among 21 sprinters in attendance.

Tammy Teague
Tammy is the heart behind the brand. Her tenacity to curate authentic journalism, supported by a genuine heart is one her many wholesome qualities.
Share
Facebook
Twitter
Linkedin
Pinterest
WhatsApp
Latest news
Food