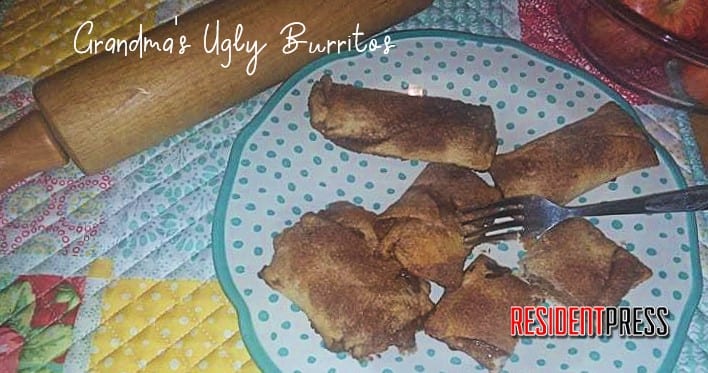 Whenever my Grandma made a pie, somehow she always had leftover pie dough. Since she never wanted to take anything for granted, she always made her famous sweet burritos. I’m not sure what she actually called these burritos, but I know when I tried to make them, mine were UGLY! So, that’s why I’m calling them “Ugly Cinnamon Burritos.” However, thank goodness that ugliness didn’t determine the taste! Somehow, Grandma always made her burritos in the perfect wrap and the cinnamon and sugar would melt in your mouth! There was never a lot of the burritos since she used her leftover pie dough, so I always had to share one with my brother. I decided as an adult, that although I don’t usually make homemade pie dough, that I needed to make some of Grandma’s Burritos. So, I bought some Ready-Made Pie Dough, and my first attempt was a huge success with my family as taste testers! However, they were UGLY. So, I need to work on my presentation a bit. Next time you make a pie and have left-over pie crust, try this recipe with your pie crust scraps, or just buy Ready-Made Pie Dough like I did!

First, mix the sugar and cinnamon in a bowl together and set aside. Now, melt the butter in the microwave for approximately 30 seconds. Then, roll out the pie dough to flatten and cut into squares. Brush the inside of the square with melted butter and sprinkle a very generous amount of the sugar and cinnamon mixture. This is about a teaspoon. You just want to make sure the butter is covered with cinnamon and sugar. Next, wrap up the dough into a burrito form.

This is where the ugly part takes place. I’m not a good burrito wrapper. But, again, the taste will out way your presentation so don’t worry to much about the looks. Once, you have your burrito wrapped, sprinkle more cinnamon and sugar on top of the burrito. Do NOT brush it with more butter. If you do this, then the tops will harden too fast while baking. So, only sprinkle with the cinnamon and sugar. Now, place burritos on a cookie sheet. I like to line my cookie sheet with aluminum foil with a light spray of cooking spray so they won’t stick and I have an easy clean up! Bake at 450 for about 10 minutes or until golden brown. Eat while they are warm and they will melt in your mouth! If you have left overs, store in a zip-lock bag and rewarm for about 15 seconds in the microwave before eating so it will soften back up the dough. Enjoy!

Extra: If you wanted to get fancy, you could add some apple pie filling to the center of your burritos! Now that would require some vanilla ice cream on the side for sure!

A Silver Lining to Inflation

A Silver Lining to Inflation