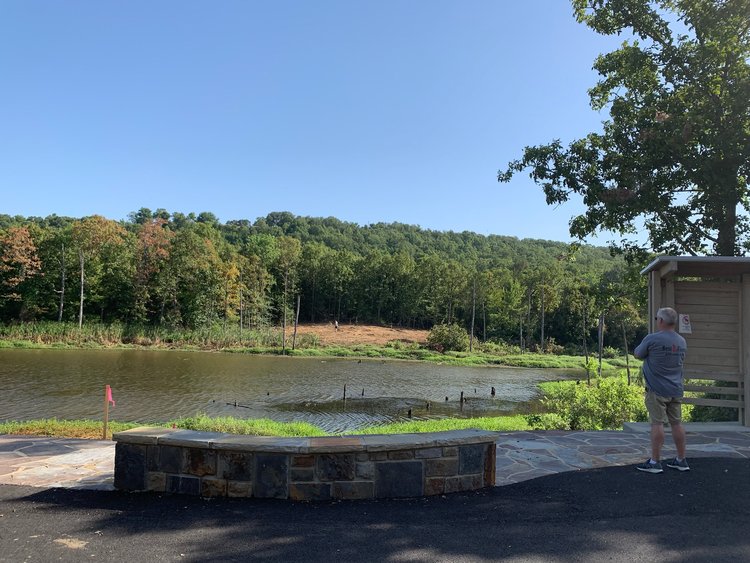 Editor’s Note: When the opportunity arose to share this historical piece, full of emotion and family ties–I jumped at it. It is an exciting project, and we invite you, our readers, to be a part!

Installment 1/3 – In part one of this three-part series we will discover the history and how the Cuthbert Bridge Project came to be. In part two, we will talk about current progress, and in the final installment, the future and how you can be a part of this amazing part of Greenwood’s history!

When you hear the word bridge, what comes to mind? An old wooden, creaky, swaying country bridge? A solid steel beam structure with beams hovering overhead? Regardless of its composition, one thing about a bridge by definition is constant – they connect two points together.

Such is the case in the planned project for the Greenwood City Lake. Two points connected, literally and figuratively…past and future.

WHAT IS THE CUTHBERT BRIDGE PROJECT?
The idea to install a bridge at the city lake is a combined effort of City Alderman Daniel McDaniel, and Tom Cuthbert III. Tom’s father, Dr. Thomas R. Cuthbert Jr. served on the water commission with McDaniel and was instrumental in a number of city projects. Cuthbert’s mother, Earnestine, was also very active within the Greenwood community.

After Dr. Cuthbert’s passing, McDaniel was approached by his son, Tom Cuthbert III, who wanted to do something to honor his father and stepmother and offered a very generous monetary donation. It wasn’t long after that, the idea for the Cuthbert Bridge Project was born.

The Cuthbert Bridge, to be named in their honor, is a fitting tribute to the contributions the couple has made to the community of Greenwood over the last 28 years.

The idea behind the Cuthbert Bridge project is threefold. First, the City of Greenwood has a need to connect the boat ramp and parking area to the trails across the cut1.

Currently, residents have to park and walk along the side of Mt. Harmony road to access the trail.  This trail connects to the Boy Scout pavilion and trails leading into Greenwood and the park system.

Secondly, the city has invested a good deal into the boat launch area and made it more usable.  That said, use is limited to those fishing on the lake.  There is no good place to fish from without a boat.  The bridge would span the width of the cut (~200 ft.) and create a place for people to walk across and fish from.  Additionally, the bridge will allow for a beautiful view of the sunset as you face west on the apex of the bridge

The bridge itself was a gift to the City from Hope, AR, and the Arkansas Department of Transportation “ARDOT”.  Doug Kinslow, who was then the City Parks Director was responsible for obtaining and preserving the historic structure.  At the time there was no real plan for what to do with the bridge,  but there was a desire to preserve its history and add something special to the City of Greenwood Parks system.

“Tom, who lives in San Antonio, TX, asked me if I would take the lead in finding some worthy project in Greenwood that would honor his father,” McDaniel added. “I told him I would be honored to do so and began to look for something that could be done around Greenwood Lake. Dr. Cuthbert loved to kayak and fish on the lake and he greatly admired the old existing iron bridge and lobbied for its preservation.”

McDaniel contacted Mayor Kinslow and said, “I’ve finally found a purpose for your old bridge.”  Mayor Kinslow was thrilled with the prospect of finally being able to bring the old bridge, which had been laying in the bushes behind the city street department since 2009, back to life.   From there McDaniel began to assemble a committee of volunteers, engineers, and subject matter experts to make the idea a reality.

In part 2, we will discuss the logistics of bringing this exciting bridge project to fruition!