Greenwood Winter Winds off to a Hot Start 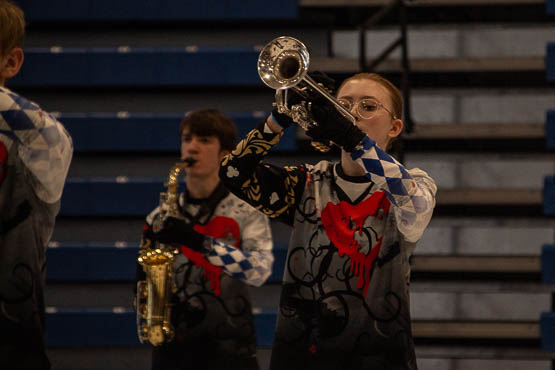 Last Fall, a group of band directors around the state decided to form Arkansas Marching Arts Association. AMAA allows indoor performing ensembles to compete in Arkansas for the first time in state history. Before, the Greenwood Winter Winds had to travel out of state to compete as an indoor ensemble. But on February 29th, Greenwood traveled to Bryant, Arkansas to compete in the first AMAA competition of their inaugural season.

This year the Greenwood Winter Winds 2020 show is titled “Off With Her Head.” The show is based off the Queen of Hearts from Alice’s Adventure in Wonderland. At the start of the show, the Queen and her guards marching out as the ensemble performs. The show features, two amazing solos that form into a duet, an incredible sounding ensemble, and beautiful visuals from the guard. At the Bryant competition, the band took first place over the Siloam Springs High School Winds with a score of 76.750.