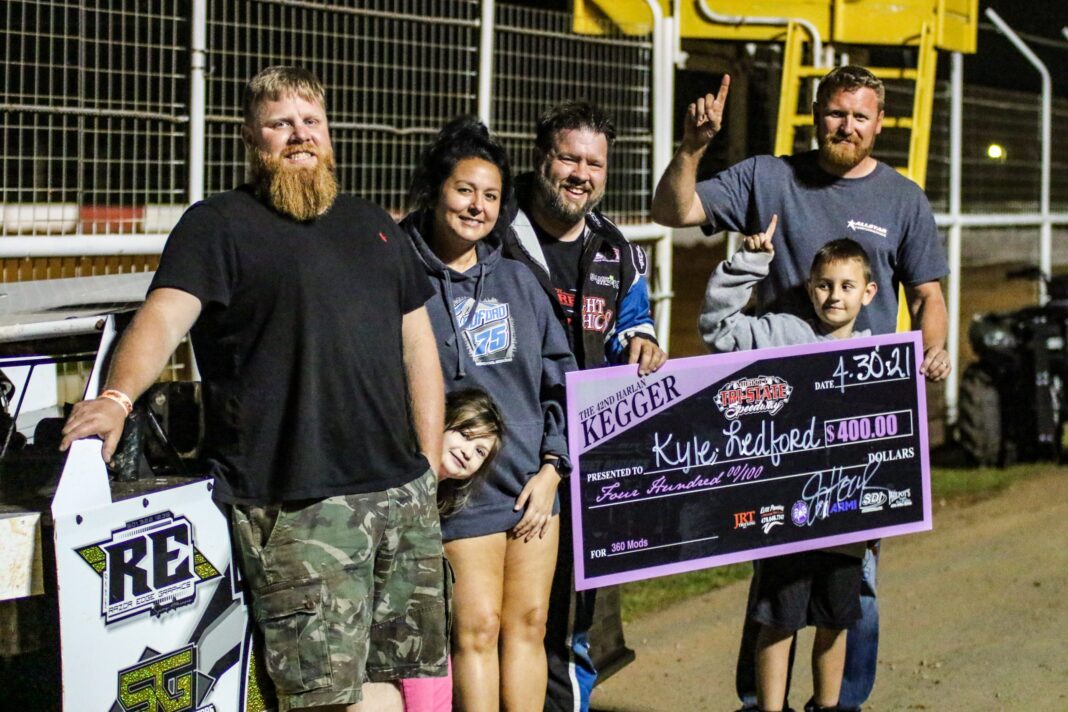 Alongside Ledford’s win it was an action packed weekend at Tri-State.

The wait was finally over as 60 cars arrived at the track up on the hill in Oklahoma and 90 on the next night. Six classes were on the schedule for Friday night with qualifiers for the USRA classes were held and heats and features for the three other classes. Saturday night saw the features run for Friday night qualifiers with the USRA Modifieds and Grand Nationals taking to the track.

While a lower than usual car count would mean at some times not so exciting races, the crowd was treated to tense moments in the modifieds and thrilling action in the other classes.

In the Factory Stock heat race 12 drivers locked themselves in for the A Feature Saturday night, with Fort Smith’s Dallas Bourland and Wesley Bourne out of Cameron, OK winning their heat races. Several quick cars out of the Southwest Arkansas area showed up and give challenge to the Tri-State regulars. Saturday nights race saw Mineral Springs’ Neil Kemp dueling with Wesley Bourne. Bourne would get the win but disqualified in post race inspection giving the win to Kemp.

USRA Stock Cars had a small group with only four cars making their way on to the Speedway. Matt French from Tulsa, OK was the Heat race winner in that class. French would return the next night and take the Feature win.

USRA B-Mod, some post race shuffling saw five cars drop from great finishing appearances. This group also had 12 cars locked in for the A Feature on Saturday. Fanshawe’s Cody King would take the 510 machine from the pole and take the win with a hard charging Kyle Slader coming up 11 spots to finish second.

Mini-Stocks had five cars entered for the Friday night portion of the Kegger. Jordan Thomas from Howe, OK would take the win the heat race. The A Feature set the tone on the type of racing everyone would see through the weekend. Attrition would take it’s toll in the class leaving Thomas and Chris Brock to battle it out in the A Feature. They would swap the lead in different areas of the track over several laps, with Brock making the move out of turn four to seal the deal with a drag race to the checkered flag.

Front Wheel Drive had nine entries vying in the two heat races. John Willard would take heat one with West Fork’s Scott Stokes taking the second heat. Willard would start from the pole and lead flag to flag to be a first time winner.

“I’ve been coming here since 1999, I have never won a feature race here. My wife is going to love this!”

USRA Modified saw 28 entries from 5 states with the farthest being from North Dakota and Arizona. R.C. Whitwell, Jason Hughes, Brent Holman, and Mike Hansen would take the Heats. Greenwood’s Kyle Ledford and Lonnie Robins would take the B Feature to get locked in for the A Feature with the other top 4 finishers. Watts, Oklahoma’s Jason Hughes would climb three positions and take the win in the A Feature.

Grand National had 19 entries with three heat races. Johnny Coates would win the first heat with Tri-State Super Stock Showdown winner Gean Davlin and Billy Wheeler taking the next two. The A Feature had Tulsa, Ok’s Jason Sperry getting the win.

Economy/360 Modified had an intense multi-lap battle between Kyle Ledford and Cody King. Midway through the race King went to navigate around lap traffic and hit the right rear of the car on the wall going into turn one. From there it was all Ledford as he made his way around the track getting the checkered flag.