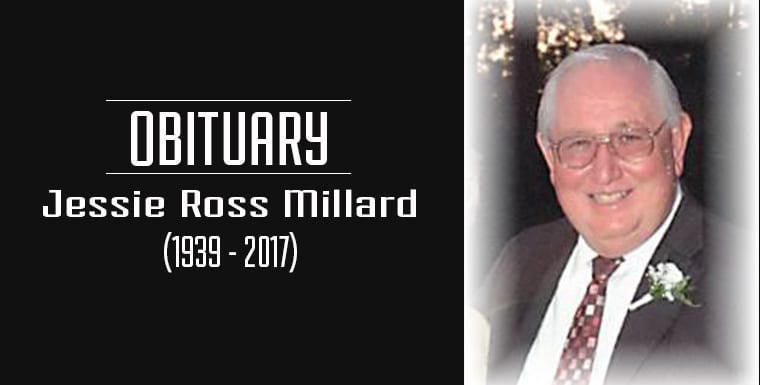 Jessie Ross Millard of Waldron, Arkansas went to be with his Lord and Savior, Thursday, May 11, 2017 in Waldron, Arkansas surrounded by his devoted family. Jessie was born June 14, 1939 to William B. Millard and Faye (Hale) Millard. Jessie was 77 years old. A man who placed God alone ahead of his family, And would’ve freely traded his life to preserve any one of the their’s.

While serving a term in the U.S. Navy, he married his wife Carol 58 years ago and never looked back, only forward. He spent the most part of his life sharing the gospel in Texas, Oklahoma and Arkansas, leading countless souls to Christ. With Gods help, he pastored and built churches in Gans Oklahoma and most recently in Harvey Arkansas where he retired after 18 years of pastor ship there.

Jessie had a wealth of knowledge and captivated audiences everywhere with real life stories of his experiences and in his last years had many recurring dreams of Heaven and it’s splendor. His last wish: for all his family to meet him there in the rapture.

Jessie was preceded in death by his parents, William and Faye Millard, one grandson, Kyle Scamardo and two sisters, Evalena Phillips and Johnie Dunson.

Jessie’s pallbearers will be his grandsons.

You may leave words of remembrance for Jessie’s family by visiting: www.heritagememorialfh.com.