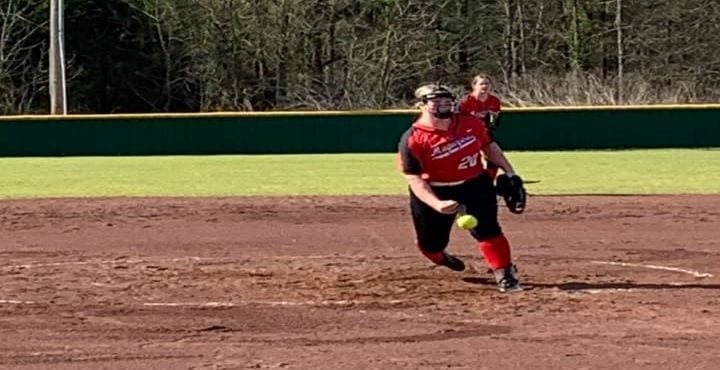 It doesn’t get much closer than this! When it came down to which packed a bigger punch, a snake bite or an arrow, the Magazine Lady Rattlers proved last night that it most definitely is a snake bite. Magazine hosted the Lavaca Lady Golden Arrows and after seven intense innings, the Lady Rattlers coiled up with a 9-8 win. The Lady Arrows were first on the board as they led 1-0 at the end of the first inning. But after failing to score in the top of the second, the Lady Rattlers cashed in on Lavaca’s stumble. Destiny Corley scored first for Magazine while Gracen Thompson earned a run on a Kylie Robinson fly ball to left field sending the score to 2-1 Magazine.

As the Lady Rattlers were finding their groove, the Lady Arrows shot into the top of the third smashing out five runs jumping the score to 6-2 Lavaca. Magazine started to slightly sweat as they could only knock out 2 runs in the bottom of the third as Destiny and Gracen each stole home upgrading the board to 6-4 Lavaca. The Lady Arrows then went stale in the top of the fourth only bringing in one run which then enabled the Lady Rattlers to make their move. Destiny Corley tripled on a fly ball to left field granting permission for Hope Cox and Kiara Vasquez to each score. Destiny and Gracen next earned a misdemeanor as they both stole home base highlighting the board to 8-7 Magazine.

With each team only capitalizing on one more run apiece (Robinson snagged the final run for the Lady Rattlers) the dust bowl was over with Magazine taking the 9-8 victory. Elizabeth Greek pitched all seven innings propelling 109 pitches to 32 batters striking out 12. With a total of 21 putouts in the Lady Rattlers field events, Vasquez led with 13. “It was a tough game last night but it put us in a three-way tie with Lavaca and Westside for the third seed in conference play,” explained Coach Buck Chappell. “We turned a 1-6-3 double play in the top of the 7th with no outs which was huge! We just stayed positive yesterday and when we got down I told the girls it’s never over and to keep plugging. Had a good inning when Lavaca’s pitcher walked bases loaded and got a couple of runs at a crucial time. Had a big inning with freshman, Destiny Corley, who burnt their left fielder with a bases-loaded triple. It lifted their spirits and a double play with no outs and a runner on in the top of the 7th pretty much sealed the game.”

With no plans of slowing down just yet, the Lady Rattlers still have three more games ahead of them this week. “Softball is such a short season and to get enough games in to determine our caliber for post-season play it’s crucial to get as many games as we can in order to work on the things we need to improve on during the limited practice times. I try to make it fun for the girls because this is a game and it’s supposed to be fun but the girls know when it’s crunch time they have to put out a little more effort in order to be successful.” Tonight, Magazine will host the Mulberry Lady Yellowjackets. “The game with Mulberry should be a good win for us. I’m hoping to save Liz and pitch my JV pitcher to help with this long week. We will need to be able to score runs today against a slower pitcher.”

As for the remainder of the week, “We will be on the road, going to Acorn, Russellville and we are also playing in the Tyson Classic at Pottsville, Saturday where we will play Pottsville and Morriltons JV teams. I like to stop and let the girls eat before games and if we do well we usually stop after the game for ice cream or something like that if it is a further away game. It is also getting closer to the end of school especially for seniors so they have to stay focused on their studies. I had two that needed to leave after the varsity game Monday to work on an assignment due Friday and the team was fine with that. Hopefully, we can have a good week and compete against Acorn Thursday. The second round of conference games will be exciting and detrimental to seeding for the tournament.”