Lakes Likely to Bounce Back From Frozen Fish 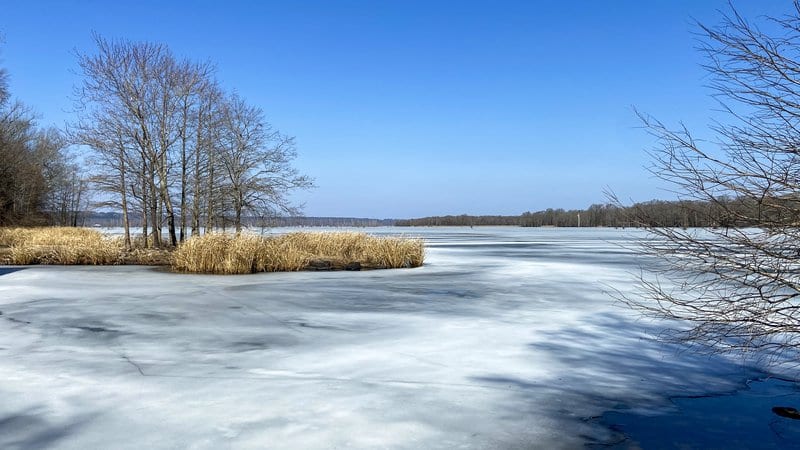 The polar vortex that covered The Natural State in snow and wreaked havoc on people’s plumbing also may have caused some temporary setbacks with threadfin shad populations in some Arkansas lakes, but biologists at the Arkansas Game and Fish Commission say there’s little cause for concern.

Threadfin shad are abundant in most Arkansas lakes, and are one of the primary food sources for game fish like bass, walleye, white bass and large crappie. They are more delicate than many other forage species and often struggle when water temperatures drop to 40 degrees. Each winter, some lakes will see shad die-offs from cold temperatures, and anglers may notice an exaggerated impact once their favorite lakes thaw in the next few days.

Jason Olive, assistant chief of the AGFC’s Fisheries Division, says the amount of shad killed will vary on each lake, due to the depth of the water and severity of the freeze.

“The shad are very good at finding thermal refuge,” Olive said. “Just because the surface is frozen, doesn’t mean there aren’t pockets of warmer water lower in the water column. There also may be natural springs that remain warmer in winter that will offer shad the ability to survive the freeze.”

Olive says lakes in the northern portion of the state may see more of a shad kill because of prolonged temperatures, but the depths of the lakes will help offset some of the damage. Bull Shoals, Norfork and Beaver lakes also had plenty of shad going into the freeze, which may help matters.

“The last few years of high water have led to a tremendous abundance of threadfin shad in these lakes,” Olive said. “We were sitting in good shape going into this winter. If there ever was a time where they had a few shad to spare, this was it.”

Olive says lakes in southern Arkansas might have fared a bit worse, as they typically are shallower, causing more impact from the freezing temperatures, but these lakes also are in very good condition, typically ranking as some of the best bass fisheries in the state. Biologists will be doing their annual electrofishing surveys soon and will be able to get a better handle on any effects the cold may have had.

“We’ve had some extended periods of freezing weather in these lakes as recently as the winter of 2013, and we didn’t see utter devastation of the shad populations in most of our lakes back then,” Olive said. “And because shad are such prolific spawners, they can rebound very quickly given the right conditions.”

AGFC hatcheries and nursery ponds may be able to boost that comeback in lakes that experience significant die-offs, thanks to recent work in forage production taken on by AGFC hatcheries in the last six years. Tommy Laird, assistant chief of the AGFC fish culture section, says AGFC hatcheries have continued to improve their shad production capabilities, and the cold weather may only serve a slight hindrance to their efforts.

“We overwinter as many shad as we can indoors, and the addition of heaters to these facilities has enabled us to keep an extremely high survival rate of broodstock throughout winter,” Laird said. “We’re expecting high mortality rates in any of our outdoor ponds that had brood shad for this year, but we can complete our stocking requests for threadfin with the fish that are currently indoors. The only setbacks from losing the outside shad would be in stocking nursery ponds on the lakes.”

Laird says if the shad supply at the hatcheries falls short of their requirements to stock nursery ponds, the AGFC will be able to purchase shad from certified private hatcheries to augment their supply, but availability may be low.

“The facility we normally purchase shad from is in Alabama, and they also saw some pretty cold temperatures, so we’ll have to see what the supply looks like if we need it and make adjustments. Worst-case scenario, we can use the nursery ponds to raise other forage species until we can restock with shad this year.”

Both Olive and Laird agree that anglers shouldn’t worry about the health of the fisheries, as no Arkansas lake is solely dependent upon stocked shad for its forage base.

“Shad populations will rebound on their own if shad are still present in the lake,” Olive said. “In most cases, shad stocking is like getting a shot when you’re mildly ill.  You’re most likely going to get better eventually, but the shot may help you get well faster.  Our stockings are the classic proverbial “shot in the arm” for these fisheries.  Shad populations will recover on their own, but sometimes it takes a very long time, and we believe our stocking can speed that up.”

In the meantime, dying shad can mean for some very fat bass in the short-term.

“When all those shad die, the bass aren’t going to pass up the free meal,” Olive said. “You can catch some right after a shad kill that look like little footballs from being so stuffed. And anglers who head to the water would be smart to have a spoon, suspending jerk bait or other lures that imitate a dying shad tied on. Just remember that water is still really cold, and you may need to slow the retrieve enough to match the activity level of the bass.”