LL Rattlers Give Lavaca A Double Dose Of Venom 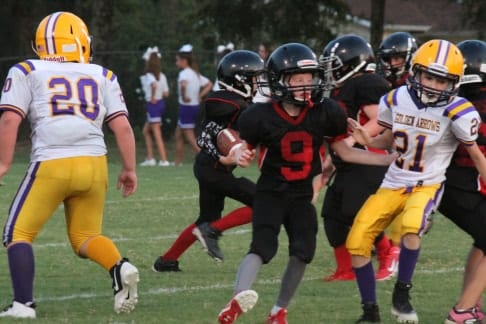 If Magazine Little League was looking for a spark to kick start their 2019 season, they found it and used it to start a bonfire. The Rattlers faced off against the Lavaca Golden Arrows Saturday, September 7th and not only did they play well, but they also dominated the Arrows on both sides of the both in both little league games.

After a slight heat delay, the third and fourth grade Rattlers took to the field ready for a Game 1 showdown. The Magazine offense had its ups and downs, but ultimately were able to hang two scores on Lavaca. The Rattlers then took their time as their venomous defense shut down the Golden Arrows piece by piece throughout the night. Magazine was successfully able to hold Lavaca to only 6 points in the game as they secured a 12-6 victory.

Third and fourth grade coach, Cody Shelton, had this to say about the game, “This group fought hard until the final whistle. We never gave up but we still have a lot to work on. I believe we proved on Saturday that we are going to be a tough opponent EVERY Saturday!”

As the heat faded later on in the evening, the fifth and sixth grade Rattlers were still able to keep the field scorching by setting the scoreboard ablaze, routing the Golden Arrows 20-0. In an offensive showcase, Magazine kept the Lavaca defenses heads spinning by mixing things up and eating yards and first downs all over the field. The Rattler defense struck at anything and everything that moved throughout the entirety of the game. If an Arrow had the ball, Magazine made sure they were bitten swiftly and furiously.

“The first game is always tough,” expressed fifth and sixth grade coach, Charly Moua. “They all played good enough to scratch a win out. Everyone had their own fair share of playing time this week but week 2 might be a little different. We still have to work harder on knowing the plays, blocking, and how to rotate starters to the second group to ensure that not so much time is wasted on rotation issues.”

With both Magazine teams gaining big wins over a formidable Lavaca Little League program, the Rattlers are hungry for more. Magazine will get their shot for seconds on September 14th as they travel to Hackett to take on the always talented Hornets starting at 6 p.m.