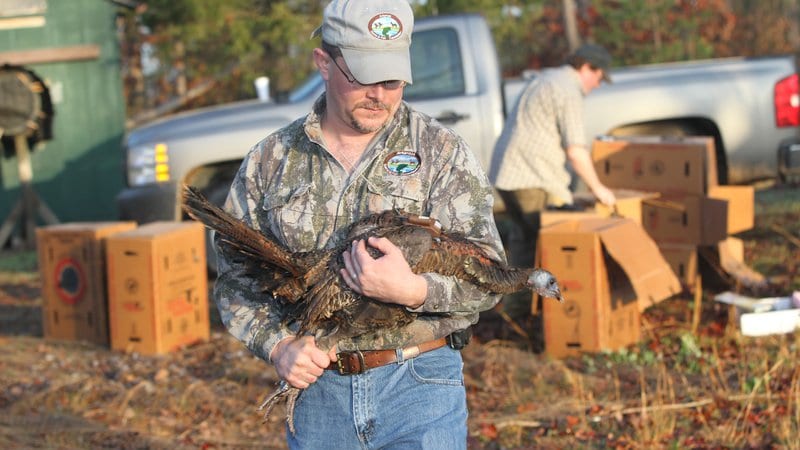 LITTLE ROCK — Two Arkansas Game and Fish Commission employees were given awards from the Arkansas chapter of the National Wild Turkey Federation at the AGFC’s March 18 meeting, held in Little Rock. Sgt. Chris Majors from Calico Rock and Jason Mitchell from Mena were both presented annual awards for their work toward wild turkey conservation in The Natural State.

Sgt. Majors received the Arkansas NWTF Wildlife Officer of the Year Award, presented by Chris Hinkle and Terry Thompson of the NWTF. Hinkle has been a wildlife officer for the AGFC for more than 23 years, all of which were in Baxter County, which encompasses three wildlife management areas and hundreds of thousands of acres of hunting opportunities for wild turkeys and other game.

“Chris has been a pillar in his community, going above and beyond what the job of Wildlife Officer entails,” Hinkle said.

In 2020 alone, Majors logged more than 150 hours of turkey hunting enforcement on both public and private property, resulting in 17 citations ranging from hunting on private property without permission to hunting without a permit. He also made many more contacts with hunters in the field to promote ethical sportsmanship and enjoyment of Arkansas’s natural resources. Majors was involved with 105 combined warnings and citations last year.

A hunter himself, Sgt. Majors has assisted many hunter and angler recruitment efforts in Izard, Baxter and Stone counties, instructing young hunters on firearms training, hunter education and other outdoor classes, including a youth workshop on building turkey calls.

Mitchell, an AGFC wildlife biologist in Mena, received the Arkansas NWTF Wildlife Manager of the Year Award, also presented by Hinkle and Thompson. Mitchell has worked for the AGFC for 20 years. He worked at the Joe Hogan State Fish Hatchery in Hot Springs, rising to the level of assistant hatchery manager before transferring to his current position in the AGFC’s Wildlife Management Division. He works on Caney Creek and Muddy Creek WMAs, two large management areas owned by the USDA Forest Service and managed under a cooperative agreement between the Forest Service and the AGFC.

“Jason spends a lot of days in the field, enjoys what he does and has a passion for what he does,” Hinkle said. “He is an avid turkey hunter and outdoorsman.”

Since 2016, Mitchell has assisted research efforts trapping and outfitting turkeys with radio-tracking equipment to determine harvest and survival rates of jake turkeys following the AGFC’s “no jake harvest” rule.  Mitchell has logged more than 1,000 hours since 2016 from January through February in trapping efforts for the research.

He also identified additional avenues for turkey habitat improvements on Muddy Creek WMA that led to a cooperative stewardship agreement that will improve approximately 4,000 acres on the area.

In addition to all the work Mitchell has completed for turkeys, his work also is essential to Arkansas’s black bear program and monitoring for chronic wasting disease to track how far into the state the disease has spread.

“He may be handling a nuisance bear one day and participating in a controlled burn the next in the Ouachita Mountains,” Hinkle said.

The NWTF — a national nonprofit organization — is the leader in upland wildlife habitat conservation in North America. Founded in 1973, the NWTF is headquartered in Edgefield, S.C., and has local chapters in every state. The NWTF is dedicated to the conservation of the wild turkey and the preservation of our hunting heritage. Through vital partnerships with state, federal and provincial wildlife agencies, the NWTF has helped restore wild turkey populations throughout North America — from a mere 30,000 in the entire United States to more than 7 million across the United States, Canada and Mexico.