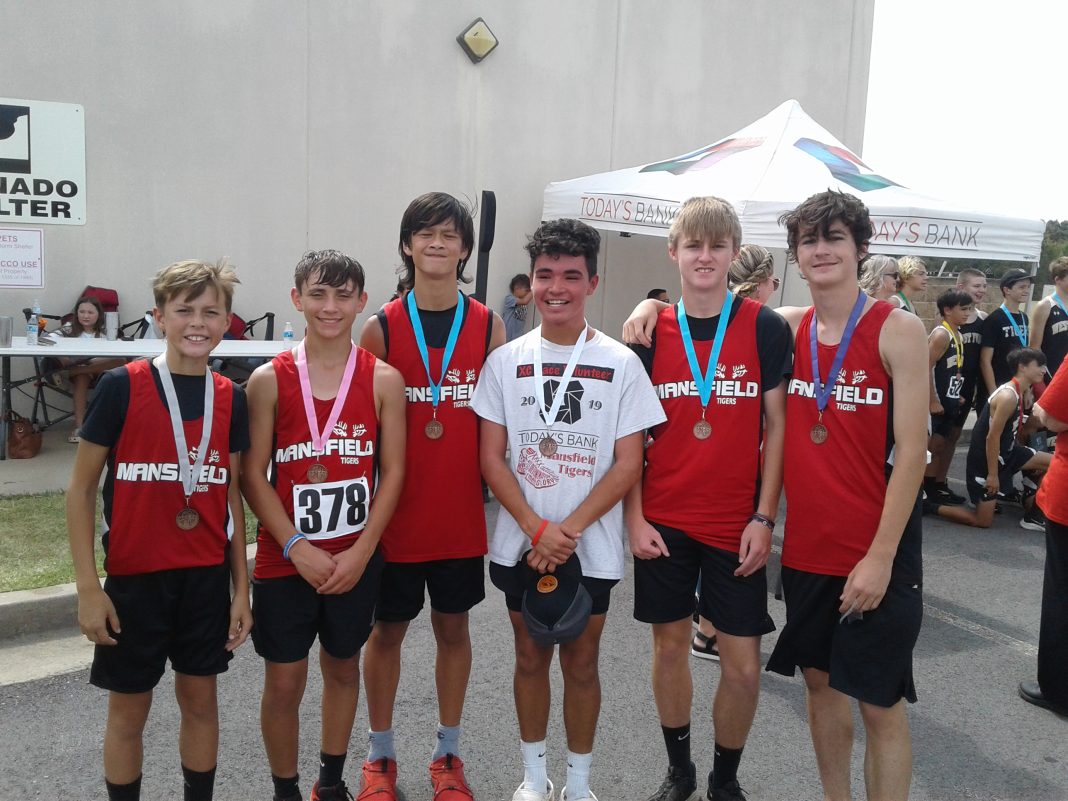 Among the 554 entries and 24 schools enrolled in the 19th annual event, it was Mansfield that showed to be a worthy adversary. The MHS players came away with 12 medals and 2 runner-up team finishes in the small school division.

The junior boys of Mansfield made the most noise in the final race of the morning. Six of those competing Tigers earned medals.

As a group, the Tiger men finished in second place in the team standings. West Fork took the title with 23 points while Mansfield finished with 33.

The Tiger junior boys finished in third just a few days earlier at the UA Rich Mountain hosted Buck Fever race. In a close contest, DeQueen took the top prize with 98 points. Mena and Mansfield tied with 100 points but Mena took the runner-up status due to their higher placing sixth runner breaking the tie.

“Rylan is coming along strong”, noted meet director John Mackey. “If she wants to be the conference champion, it’s right there in front of her. Rylan is making gains every week on the Magazine freshman leader.”

Jones was also sixth at the Buck Fever 2.5K race on Tuesday. She has medaled in every meet but one so far this season.

MHS newcomer and teammate Abby Smith also medaled at the Today’s Bank race. It was her first medal in only her second event of the year.

“Abby has been heavily involved in conference volleyball play,” said Mackey. “She has been running early in the mornings to get some work. The more race reps she gets, the better she will be. I’m happy she got this medal. It was a matter of time she would break through.”

Mansfield’s senior girls did well walking away with four medals. Unfortunately, those placings fell out of the rankings as the team did not have a fifth runner. The groups top two players Laney and Jadelyn Wood fell ill the night before the race.

“With those two here, we may have had a shot at winning,” offered the head coach. “Our girls ran well. Raine Hecox set a personal record for the 5K distance.”

Award winners for the Mansfield senior girls were Trinity Triska, Hecox, Ashley Martin, and Addie Bowman. Triska, Hecox, and Martin joined the Wood sisters at the UARM race earlier in the week to take the runner-up plaque there.