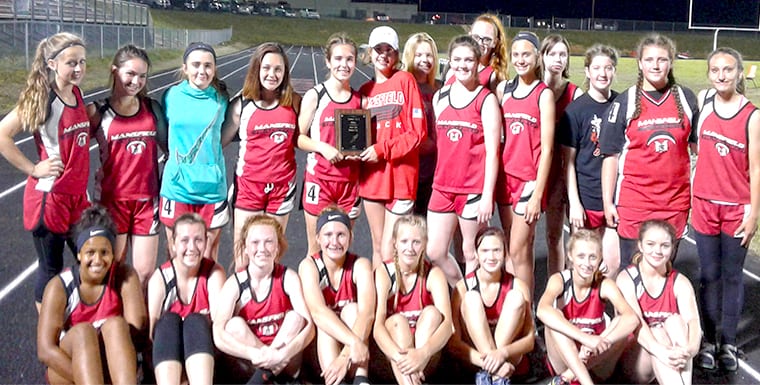 Winning conference championships has simply been a right of passage for most Mansfield Lady Tiger track athletes. Only once over the last decade have the junior girls failed to take home the conference crown. Last week, the string of junior district titles took another chink in the armor.

Mansfield knew going into the 3A Region 1 West district track meet that they were going to have their hands full with the Pirates of Cedarville. On paper, it was the talented Pirates that that looked loaded for a district title. After the results came in on the Mansfield hosted April 19 meet, that suspicion became truth.

Cedarville up ended the Mansfield junior girls by 21.5 points for the team title. The Pirates caught full sail over the final five events to sneak past the proud Tigers.

“I knew it would be really close,” said Mansfield mentor John Mackey. “They (Cedarville)had all the best sprinters and enough 300m hurdlers and 800m runners to neutralize us in the end. There just wasn’t enough help by the rest of the league to break up the points.”

Cedarville took first place with 218 points. Mansfield after holding a sizable lead out of the field events slowed down in the running to finish runner-up with 196.5 points. Elkins closed with 78. Greenland got 66.5. Charleston captured 27. Haas Hall hauled in 19 to complete the scoring for the six team league.

“Our girls were heartbroken,” said Mackey. “Especially the freshmen, they wanted it really bad. They have nothing to be ashamed of course. The effort was there. Cedarville just had the right mix of talent and speed to trump our best moves.”

Lillie got it going first with a win in the women’s long jump. The maxed out player went 15’ 1” for the horizontal victory. She also won the 100m hurdles with a time of 17.65.

A pair of second place finishes and a third followed Lillie as the meet progressed. She took second in the 100m dash at 14.38. She took another silver with a 30’ 6” triple jump. Finally, her individual events concluded with a 54.89 run over the 300m hurdles.

It was Mars and a girl from Cedarville that edged Lillie in the 300m hurdles. Mars took first with a 54.23 clocking. It was her first individual victory of the season. Kamryn Vinson of Cedarviile posted a 54.87 to split the two Lady Tigers for second place in the event.

Roberts won the high jump. It was the rookie’s second straight victory in the horizontal hop. She also won the Waldron invitational against older competition a week earlier. Her mark was only 4’ 4” at the district but eclipsed 4’ 7” at Waldron.

Thomas also pointed in the women’s triple jump. The newcomer leaped a personal best of 28’ 0.5 “ for the bronze award. Mikalya Harrison caught the final triple jump point with a 25’ 2” measure.

Hailey Walker and Morgan Burns took second and fifth respectively in the high jump. Brooke Wright won the discus throw with a spin of 77’ 5”. All three were Mansfield eighth graders.

Wright also tallied in the shot put. She was fifth at 27’ 9.5”. Freshman Tiger Sarah Roberts went 28’ 7” for the third place position in only her second meet of the year. Amber Elmore closed the MJH scoring in the shot with a seventh place toss of 27’ 4”.

Janna Coplin and Kaitlin Slinkard got eight more points off the throws for Mansfield. The two did so out of the discus ring. Coplin threw 59’ 9” while Slinkard went 56’ 2”.

Mansfield relay teams got two seconds and a third. The combination of Harrison, Mars, McKenzie Griffin, and Lennon Woods took silver in the 4x800m cooperative. Mars and Griffin joined Addison Goetz and Delilah McKusker for the second place 4x400m team.

Mansfield’s other relay team took third in the women’s 4x100m relay. After an injury necessitated a sudden change in the lineup, MHJ sent Hailey Reves, Goetz, McKusker, and Lillie round the track in 59.37.