MMS Students Give the Gift of Color 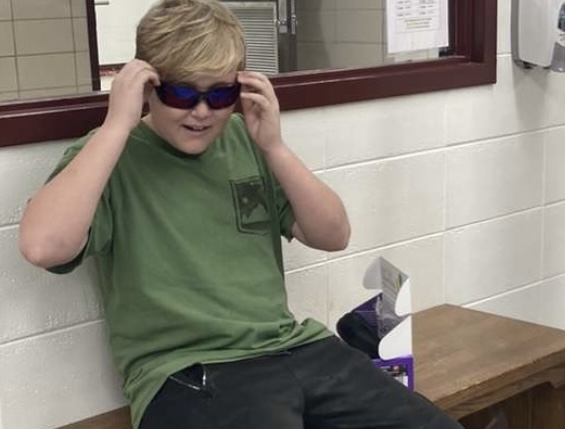 Mansfield Middle School 6th grade students, Lily Dyer and Rylie Moore, recently started a secret mission to make one fellow student’s dreams come true.  In September, while sitting in history class, their teacher, Mrs. Holland, called upon Thomas Boyd to answer a question about a map they were studying in class.  Thomas told the teacher he was unable to answer the question because he was color blind.  With the help of his classmates, they answered the questions altogether.  After class, the girls discussed how they wished Thomas could see color just like they could.  Lily and Rylie decided on a secret mission to help Thomas to see color just like them.  They went home that day after school and asked their parents if they could do a secret fundraiser to raise money to buy Thomas a pair of glasses that would allow him to see color like others.  After getting their parents on board, the two girls went to work baking cookies, and Lilly even invented her own secret sugar cookie recipe to make the perfect delicious sugar cookies. The girls raised over $300 dollars to buy the special glasses for their classmate by selling  44 dozen sugar and chocolate chip cookies to friends, neighbors, teachers, and students. Once the money was raised, Lilly’s mother, Shenae Sanders, did the research and ordered Thomas the Enchroma glasses that would allow him to see reds and greens as we see color within our eyes.

Today, principal, Josh Brown, called the students out of class so that the girls could present Thomas his glasses and see a whole new world.  Thomas’ reaction brought tears to everyone’s eyes as he was in awe that his fellow classmates would do such a sweet and kind gesture. He held back the happy tears as everyone told him the surprise. He thanked and hugged his friends for all their hard work. He also couldn’t believe the Razorbacks were red, a basketball was orange, and even the color of school bricks weren’t green anymore but finally red!  His reaction was priceless and he couldn’t wait to see a Kansas City Chiefs’ logo and go home and look to see what color his dogs really are!