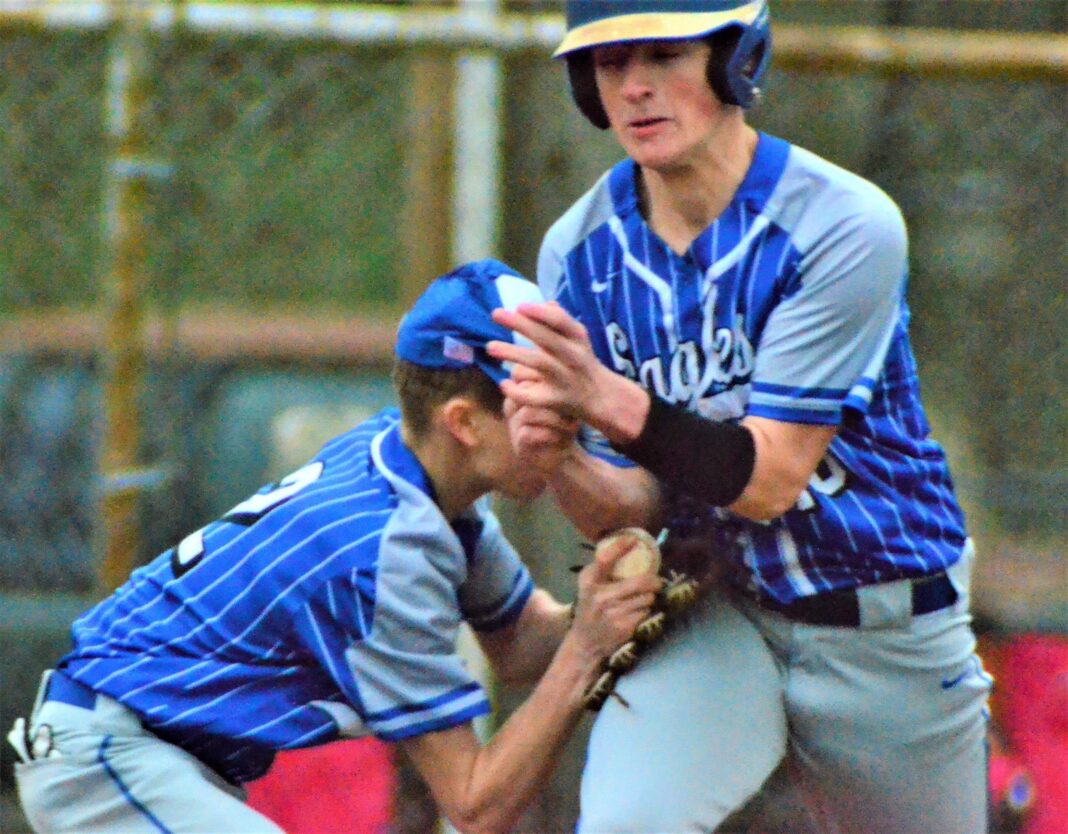 On a cold, gray, overcast day in February, passers by in the town of Paris could hear the crack of bats, players laughing, and parents having a good time as they cheered on their sons and daughters as they played the great sports of baseball and softball. The Paris Eagles baseball team and the Lady Eagles softball teams were at home in their ballparks on Tuesday playing preseason Blue / White intrasquad games. The Blue / White games were the final scrimmages of the preseason for both teams before they open their schedules next week.

As with the case of Major League baseball spring training every year, hope springs eternal as teams are optimistic about the upcoming seasons and are anxious to jump into their schedules and begin their quest for the coveted spots of regional tournament births that are the pathways to the state tournament and a possible state championship.

But as also the case with Major League baseball, only a few teams will actually make the playoffs and have the opportunities to compete for championships. Injuries, breaks in games that come at key moments, weather conditions, etc., can all have a significant effect on who actually makes the post-season tournaments.

Paris coach Josh Hart is optimistic about his team’s season going into next week. “We’ve got seven seniors this year. We return everybody. We’ve had a couple of younger kids come up, Mason Bradley being one of them; he is going to contribute this year. Mason plays shortstop, pitches, second base; I can pretty well move him anywhere I need him. He has good speed and can also play the outfield. All of our pitching staff from last year is back. So, pitching-wise, we have about eight or nine arms that are available and that I feel like I can go to in a game. From that standpoint we are pretty good. Senior Patrick Richardson will be available this year. He will be our catcher. We also have a returning outfield, so, we should have a pretty good chance of doing pretty good in conference.”

I asked Coach Hart if he felt the Eagles are a potential first, second, or third place team in the conference. Coach Hart responded, “I feel like we can be in the top four. Definitely want to make it to regionals this year; we were a little shy last year. So, I feel like what we have added, how much we have developed over the off season, I think we can do that.”

Tuesday’s scrimmage was a five inning game. “We ran it just like a season game. I split them up as evenly as I could. We gave our pitchers a limited amount of work, about 35 pitches each, just about like a bullpen session. I wanted to work some of our top pitchers who will be getting some starts.”

The Eagles open the season on Monday, March 2 at Dover. “We open at Dover as long as it is not rained out. We go to Scranton on Wednesday, and Friday will be our first conference game against Two Rivers here.” When asked who Coach Hart thought would be the top contenders in conference this season, he said, “Fountain Lake, Atkins, Perryville, and Lamar (in addition to Paris). Really, there are some there that we are going to have to beat them out (of playoff contention) that were in the top group of teams last year. Fountain Lake has as many returning players as we do. I think Atkins is returning several. I am pretty sure Lamar is returning their best player, but we had a close game with them last year. I feel like we should be able to beat them this year.”

Tuesday’s Blue / White game was the final dress rehearsal for the Eagles before the start of regular season play. “We lost a benefit game that was supposed to be held at Subiaco. So this has become our scrimmage game before the season starts.”

Lady Eagles coach Donald Hart was pleased overall with his team’s performance on Tuesday. “It’s good when you can get outside and get going. I thought both squads competed really well. We’ve got some that are new and don’t have much experience. They got a little bit of experience today and I thought there were some bright spots and some kids that surprised me. Our veterans came out and did what they were supposed to do. We’re not near mid-season form yet, but we’re getting close to being ready. Overall I was impressed with how we did.

Coach Hart divided his players as equally as possible to make the game competitive. “I did divide them equally the best I could. I did give a little bit more offense to the white team because I thought Jadyn (Hart) was a little bit better on the pitching end. Karsyn did a really good job; I think she got a little tired in the sixth inning, but other than that, she did a very good job.” When asked about how he managed his pitchers, Coach Hart said, “With girls, we just go until we can’t go anymore. I let the catchers call the pitches versus me; I’ll call them in a game. My rule is if they walk two in a row, I’m going to pull them. I managed it today just like it was a season game.”

Going into the season, Coach Hart believes his team will be near the top of the conference standings among schools competing for the regional tournament. “We should be there right at the top of our conference. We only lost three players from last year’s team, but they were three big seniors. We have some young talent, but we’re a little bit inexperienced. We’re going to have great pitching. It’s basically going to be how well we gel together. Right now, I’ve only got nine days with the entire squad, even though some of them have been working on it along with basketball. So, we’re not just going to jump out of the box into mid-season form. But I really feel like we should be competing for a conference title.”

The start to the season is just around the corner for the Lady Eagles. Paris will host Mansfield on Monday, March 2. “We host Mansfield here on Monday, and then we have two JV games next week; at Ft Smith Northside and at Greenwood.”

When asked about who Coach Hart believed were going to be the contenders in conference this year, Coach Hart responded that in addition to Paris, “Perryville is going to be tough; they have everybody back. Atkins is always tough. Booneville is improved, and I really feel like us and those three are going to be the four teams at the top, but you can’t take anyone for granted.”

The team should be a full strength on Monday to start the season. “We are going into the season healthy. We have some bumps and bruises from basketball season, but I have our pitchers and catchers running right now and we’re getting there. Hopefully we are going to stay healthy. We are going to work really hard over the next three days to get ready for Monday.”

Next week’s slate for the Eagles baseball team is a road game at Dover on March 2, followed by another road, non-conference game at Scranton on Wednesday, March 4. The Eagles first conference game will be held on Friday, March 6 versus Two Rivers at Paris City Park. The Lamar Warriors will come to Paris on Tuesday, March 10.

The Lady Eagles schedule for next week will include games with Mansfield at home on Monday, March 2. The home stand will continue when the Lady Eagles host Two Rivers on Thursday, March 6. It won’t get any easier for Paris when they host Lamar on Tuesday, March 10.

So, Paris fans, it looks like a great season ahead for both teams. Come out to the ballparks and support both of these teams as they compete this season to earn births in the post-season. And don’t forget your rain gear on Monday!