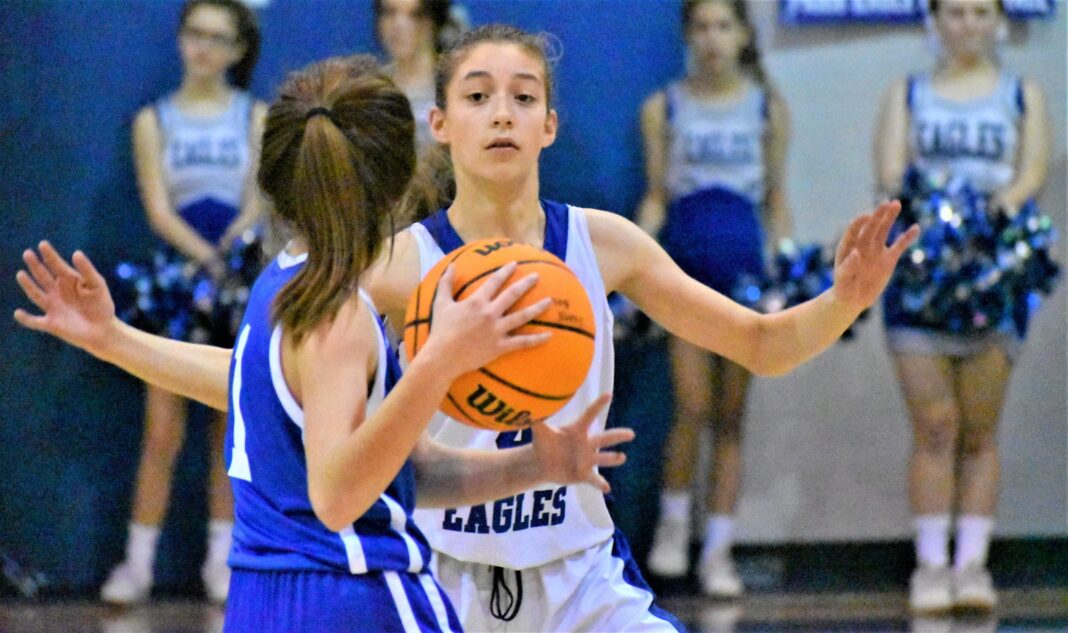 Playing on the road and seemingly over-matched, the Two Rivers junior Gators and Lady Gators visited Paris for a junior high conference match-up. Two Rivers, who recently moved most or all of their freshmen players from their junior high team to the varsity, played the Lady Eagles with a predominantly eighth grade team. The result, as expected, was a lopsided win for Paris in a game in which the Lady Eagles mass-substituted early in the game. The Lady Eagles defeated Two Rivers 37-16.

Paris coach Dustin Williams said after the game, “We were up 33-5 when we pulled the starters. I am proud that everyone was able to get some good minutes and reps. This team is really coming together heading into the last week of the regular season. They are 9-1 in January.” With the win, the Lady Eagles moved to 14-4 on the season.

In another mismatch, the Paris Junior Eagles defeated Two Rivers by the score of 48-23. The Eagles were able to play a lot of players off the bench, resting their starters for the stretch run of the conference schedule and the upcoming junior district tournament. Paris coach Mike Foster commented, “It was a game everybody got to play in so it was fun for all of our players.” Paris was led by Jesse Wells with 12 points. Matthew Mainer had 11 points and 6 rebounds for the Eagles. With the win, Paris improved their record to 16-5.

Preceding last night’s game was the news that tonight’s games versus Perryville were postponed due to the flu outbreak in Perryville. Although no team wants an interruption in the schedule during the season, the news came as welcomed news to Paris as their junior teams were scheduled to play back-to-back games against Two Rivers and Perryville on Thursday and Friday nights. That is not unusual in scheduling, but at this point in the season, all teams are a little fatigued and nicked up with nagging injuries that have been accumulating throughout the season. The rescheduled games with Perryville gives both the junior and senior high Eagles and Lady Eagles teams the night off, as well as the weekend off, and is a welcomed rest opportunity going into the last week of the season and the post-season tournaments to follow. Paris fans hope that for their players’ health, as well as its effect on the teams going into tournament play, that the flu bug stays away from Paris.

The re-scheduled games with Perryville will be made up in Paris on Valentine’s Day, February 14. It will follow the conclusion of the junior high district tournament, and could potentially be the first game for freshman to be added to the rosters of the Eagles and Lady Eagles varsity teams. The Perryville game could be a preview of the teams as they head into senior district tournament the following week.

So, for Paris, it is now a matter of rest, healing, and prevention from the flu and other viruses that seem to be circulating in many of the communities surrounding Paris. The unexpected break in the schedule has come at a good time for the Eagles as next week’s games and those to follow in post-season play will be extremely important.