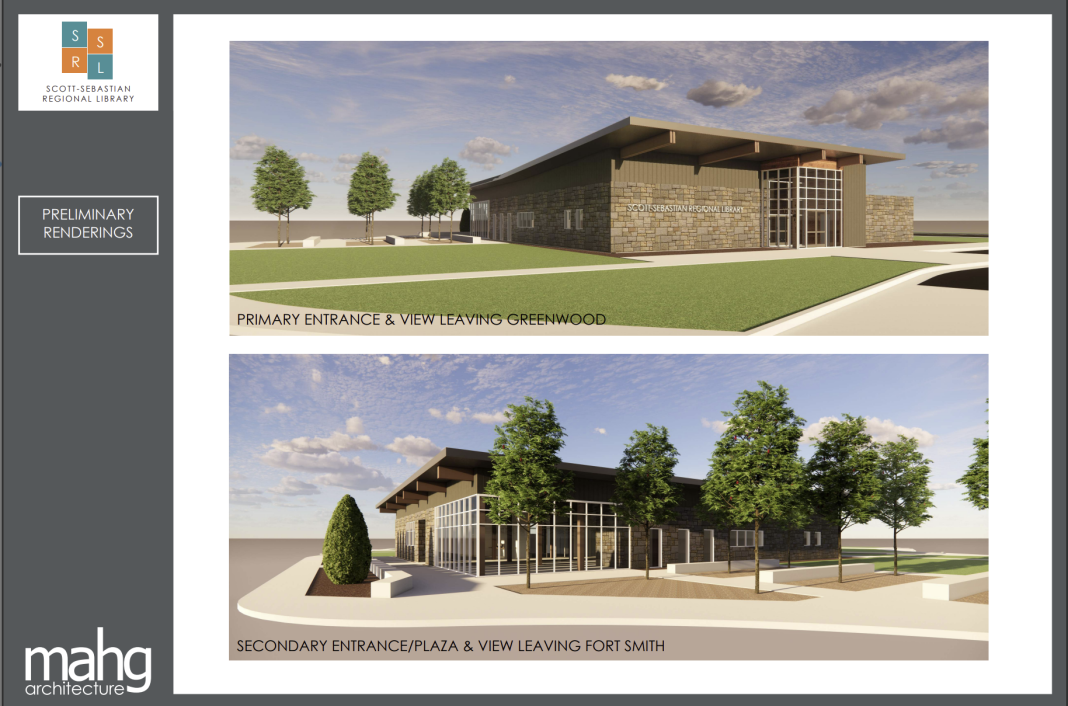 For the first time in over five decades, the patrons of the Sebastian County Regional Library will have a brand new space to research, meet, study, and accompany future generations to learn and grow.

In 2021, the Sebastian County Quorum Court approved the multi-million dollar project. The new 11,000 sq. ft. library is part of the planned “The Curve” development, located at Highway 10 Spur and U.S. Highway 71.

With the land secured, plans to procure utility services were underway. Those plans included the City of Greenwood and gaining water access to the property from James Fork Regional Water District. In the August 2022 meeting of the Greenwood City Council, it was unanimously approved to purchase the water rights for 35.96 acres of land.

The City of Greenwood invested $521,000 to extend the utility to the site. As part of that agreement, the city also added 53 new water customers. With strong potential development, the rate of return could be high. “There are a lot of variables that are in play which could and will have an impact on accelerating or decelerating the return,” shared City of Greenwood Finance Director Tom Marsh.  “Some key target variables to consider would be how soon ‘The Curve’ is both commercially and residentially developed and how quickly the newly acquired James Fork service area, east of the curve development, can be annexed into the city. Using current tax and revenue data, it is projected that additional tax revenues from the acquired and subsequently annexed service area would produce an ROI of approximately 7 years.  As development occurs and commercial properties begin operation on the ‘Curve’, the ROI time frame would be favorably accelerated. We anticipate that, given the strong commercial interest in the development, the city’s investment recovery would be realistically somewhere in the range of 4-7 years. This projection is based on tax revenues generated by the service area acquisition and subsequent commercial and operational development of ‘The Curve’ and excludes water and wastewater income generated from utility sales to newly acquired customers. These revenues will be used to cover operational and administrative costs for the water sewer departments.”

Jim Reynolds, who has been a key advocate for the project, stated that the new library has been a goal for both him and the other four members of the Sebastian County Library Board. “Although I have been working to see this happen, Dr. Ken Hamilton, who also serves on the board, has been advocating for over 20 years.”

Scott-Sebastian County Library Director Rene Myers addressed the lack of accessiblity for handicapped patrons, noting “currently, in this facility, we are not able to serve all of our community.” Myers went on to address the current location’s shortcomings, noting, “…Some of our staff can go home, but a few of us cannot, and we do not have a proper place to spend our lunch…”

The board considered three location options: Bell Park, behind the courthouse and the Highway 10 Spur and U.S. Highway 71 area, or “The Curve”. With the approximately $1 million dollar land donation by Jacob Burton, the board agreed to move forward at that location.

“There have been some comments stating they hated to see the library moved away from the center of the city,” shared Reynolds. “I reminded them that this is a regional library and not a city library. It serves Lavaca, Mansfield, Hackett, Hartford and communities in Scott County.”

Myers concluded that with the new location she expects to see more visitors from other locations “swinging back by” on their way from Fort Smith before their local branch closes. Additionally, she recognizes “The Curve” location is ideal for people who do not want to drive all the way through Greenwood.

The new facility will double that of its current 5,500 sq. ft. space. According to Travis Bartlett, MAHG architect, the library construction should begin mid-February into March, 2023. However, he noted that the dirt work will begin much sooner than that. “From September 2022 – March 2023 the design and bidding process will be underway,” Bartlett shared. “I don’t think it is a secret that we are also working to coordinate another project (Braums)… “Earthwork will begin at the end of the year and into the new year. I anticipate that the construction will take 18 months, putting us into the new library in September of 2024.”