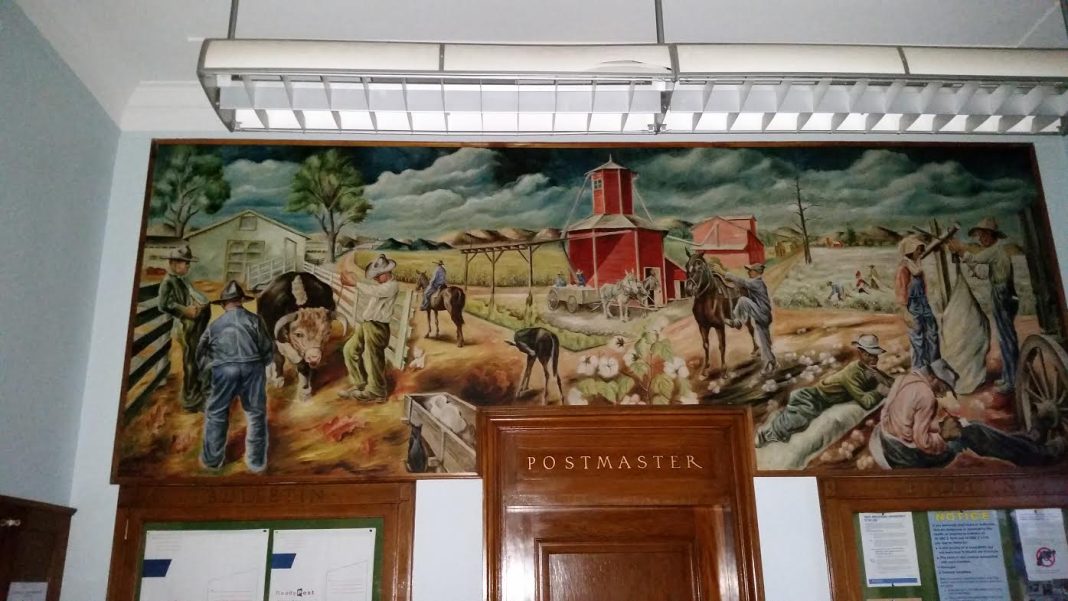 The Great Depression were hard years for the people of the River Valley.  Drought, dust storms, falling prices for farm goods and business failures lead to a virtual collapse of the economy.  My father spoke many times of going bare-foot and having only a couple sets of clothes a year as the norm.  My grandfather could find only sporadic work, most of that for the WPA and to do that you often had to sale off most of your land to the government at ridiculous prices.  Nationwide, people stood in soup lines and grasped any opportunity to make a nickel working.  Times were often even harder for those that made their living in the arts; few had the money to invest in entertainment, music, or art.  To remedy the situation, FDR instituted a series of programs that would employ artists and, at the same time, bring the arts to the common man. Between 1933 and 1945, the federal government employed thousands of these starving artists to works for public enjoyment.

One of the most popular and endearing facets of this work in Arkansas is the various murals found on the wall of local post offices.  Nationally, over 1300 murals decorated public post offices and depicted life in the region.  In our area, many of these murals still exist and are often unnoticed features in the background as we rush in to buy stamps, drop of letters, and get on with the business of the day.  Morrilton, Van Buren, Dardanelle, Clarksville, and Paris all still have these mementoes of by-gone days decorating the walls of the post office.  Often created by well-known artists, the paintings go unappreciated.

At Paris, the German born artist Joseph Vorst painted a masterpiece work entitled Rural Arkansas.  In several realistic scenes, he depicted the life of rural Arkansas. Vorst, an immigrant and latter a native of St. Louis, obviously knew little of farm life.  The first drawing he submitted had the improbable scene of a baby mule with its mother.  As farmers know, mules are cross-bred and do not reproduce. Sent back to be redone, he created an amazing work of art. I can almost see McLeanbottoms in my mind as I look at figures picking, weighing, and ginning cotton.  Bystanders gawk as a prime bull is brought to market and one can see the mountains in the distance.  The art work is situated right above the door to the postmaster’s office; in fact, the door cuts into the original scene.

A similar art work by the artist L. Mactarian covers the wall at Dardanelle.  The cotton industry is again the centerpiece of painting and one observes cotton from production to shipment overseas.  One of my favorites, The Chosen Site in Van Buren shows a family heading west, the expressions of determination and grit written all over their faces.

The program ended in 1943.  Payment for some of this priceless art was around 10 dollars per square foot, a total of around 750 dollars for each painting. Though not a great sum, it helped many of the artist survive and continue with their chosen career through the hard depression era.

As you enter the various post offices, take time and examine and enjoy these beautiful pieces of art and history, a legacy left to us from the 1930’s.