Pyles Pours It On 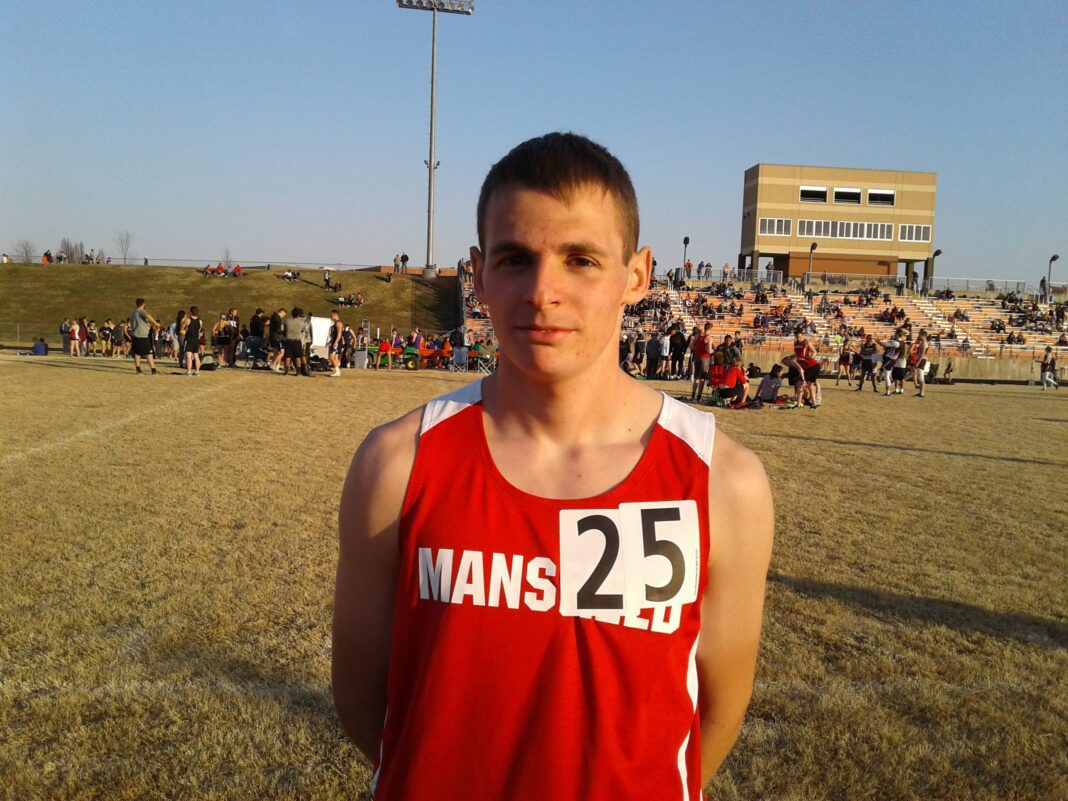 The instructions before getting off the bus were to check the egos at the door. Running at a big school track meet such as the one Mansfield attended on March 15 in Gravette has a way of making an individual question self worth. For one Tiger runner, he listened to instructions and just ran. The results were a pair of personal records.

Devon Pyles, Mansfield’s top ranked distance runner, decided to relax and just go with the flow. Racing against 6A and 7A sized schools among others could have been an excuse for the senior to sit back and mail in a pedestrian performance. Instead, he went out and competed.

Mansfield mentor, John Mackey, warned the bus load of men and women high school runners that the level of competition was going to be fierce. He and his past teams used to travel the Northwest Arkansas circuit with regularity while in the midst of winning 4 consecutive state championships from 2007 to 2010. Even then, high caliber athletes from the big school region had the occasion to humble Tiger pride.

It was Mackey’s message to not dwell on placing but rather focus on the times and distances the competition could bring out in them.

Pyles was one of the first Tigers to respond. Pushing pride aside, he challenged himself to stay with the top distance runners. Despite completing 3 individual races outside the top 8, the senior set personal records in his 1600m and 800m runs. It also went well in the 3200m run as he stuck to a blistering pace for a near best mark in that event as well.

In the 1600m run, Pyles rounded the 4 lap race in 5:15.54. Although finishing only in 14th place overall, he made a statement to the closest 3A Region 1 conference competitor by crossing 26 seconds sooner.

In the 800m run, the motivated runner poured out a time of 2:21.00. Teammate Joris Felius also caught fire with a 2:27.40 mark giving the MHS Tiger men the top two spots among nine conference opponents.

“It goes to show you how inconsequential the places can be,” commented Mackey. “Devon was 19th and Joris 31st in the 800m races. But, they were heads above of conference competition, and solid in triple A state terms.”

Mansfield’s Jaicy Griffin also ran without intimidation. He lined up in the fastest flight of the 100m dash competition and showed he belonged. In a wind aided sprint to the finish, he was 0.04 seconds off the 3A state qualifying mark.

Griffin’s 11.38 second measure over 100m distance stands among the best Tiger performances of all time. Compared to the 58 other athletes that ran the short race at Gravette, he was 14th overall.

The sophomore sprinter did not complete his night’s full schedule of events. An awkward push-off in the high jump lead to a slight ankle sprain giving cause for his coach to shut him down for the rest of the meet. That included a state qualifying try in the 200m dash.

A hand held stopwatch at the Booneville Bearcat Relays last week showed Griffin should be capable of reaching the 23.31 state standard in the 200m dash.

Other bright spots for the Tigers included a first time pole vault competition for newcomer Will Meadows, and a season best triple jump by both Meadows and Lady Tiger Corrina Wesley.

Meadows, just a sophomore, cleared 8’ 0” in the pole vault. He’s main competition in conference only went 7’ 6”.

Moments later Meadows found a spring in his step at the triple jump site. His bounce across the runway ended in a personal best 38’ 6”. That measure bested the second ranked conference jumper by over two feet yet it was only 16th among the entire field.

Wesley went 30’ 7” in the triple jump. The two-time state qualifier in that event didn’t hit the 30 foot threshold until late April last season.

Wesley’s eighth place triple was a one of five actual ribbons won by the Mansfield legion. The other’s came in a collective effort in the girl’s 4x800m relay. Alyssa Berry, Corrina Wesley, Lennon Woods, and Megan Rose partnered for that run.

Haylee Buckner missed a high jump ribbon due to early misses. She was tenth place at 4’ 6”.