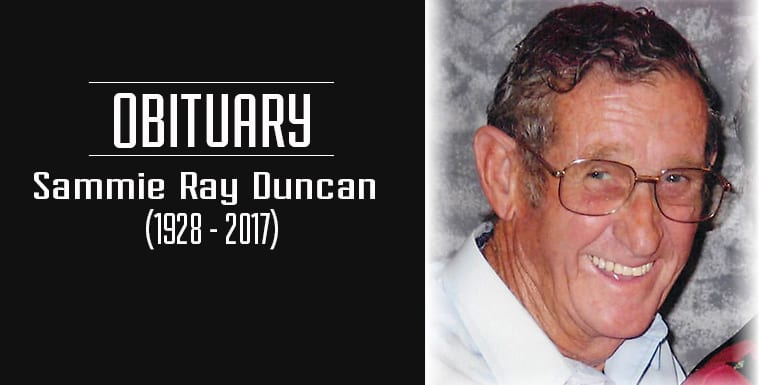 Sammie Ray Duncan of Cauthron, Arkansas went to be with his Lord and Savior, Sunday morning, March 5, 2017 in Waldron, Arkansas surrounded by his loving family. Sammie was born May 10, 1928 in Maude, Oklahoma to Joseph Samuel and Audy Belle (Young) Duncan. Sammie was 88 years, 9 months, and 3 days old. He was a member of the Bates Baptist Church in Bates, Arkansas.

Sammie married the love of his life Dorothy Sanders in May of 1952 and together they lived 64 wonderful years until her passing in June of 2016. They were blessed with two wonderful children and then the treasure of grandchildren. Sammie was a Master Mason and member of the Cauthron Masonic Lodge in Cauthron, Arkansas above the old school house when it closed. He was a member of the Waldron Masonic Lodge #132 F&AM. He was a 32 degree Scottish Rite Mason. Sammie retried as a security guard from Tyson Foods in Waldron. He was a United States Army Veteran.

Sammie’s life celebration will be 10:00 a.m. Wednesday, March 8, 2017 at the Bates Baptist Church in Bates Arkansas with Rev. Joe Hayden Hall, officiating. Interment will follow with Masonic Rites in the Kirk Cemetery in Cauthron, AR. Arrangements are being entrusted to the Heritage Memorial Funeral Home & Crematory in Waldron, Arkansas

You may leave words of remembrance for Sammie’s family and view his video tribute by visiting: www.heritagememorialfh.com.