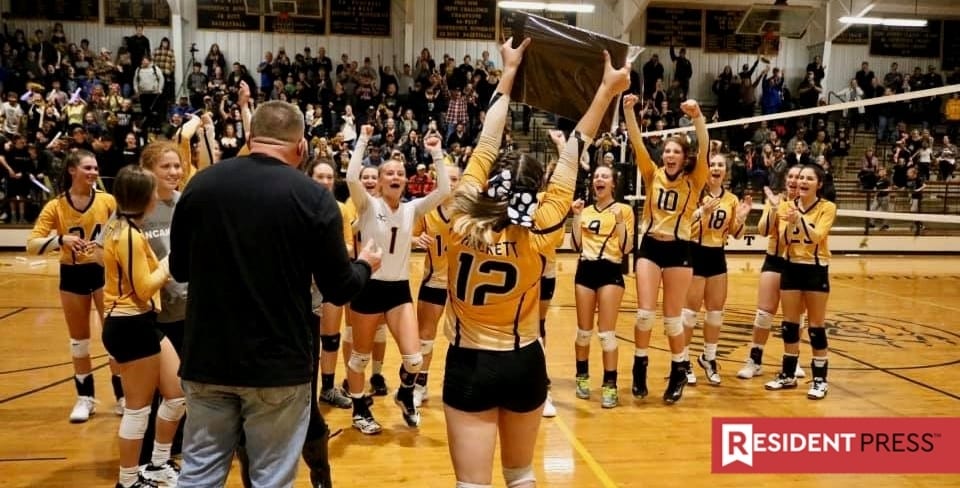 It was a sight to see as the Hackett Sr High Lady Hornets hosted the Lavaca Lady Golden Arrows in Thursday nights final round of the 2A West District Tournament. The Lady Hornets were already sitting as the undefeated 12-0 Conference Champions and were ready to go head-to-head with Lavaca to achieve their next title.

The court saw both powerhouse teams slam and bam in a fast-paced hardcore battle to the finish line with Hackett taking control of the situation earning them their second hat, the 2019 District Champions. During the first set, the Lady Hornets flexed their dominating muscle and took the win 25-8. But with the next two sets, the Lady Arrows were warmed up and awake forcing Hackett to focus on every little detail.

The Lady Hornets were able to pull ahead in the end and take the set victories of 25-22 and 25-21. Rain Vaughn guided her team as the top hitman with 14 kills. Madeline Freeman followed with six, Kenadi Wright and Shayla Foster contributed three each, and with two apiece was Kandace Byrd and Jamye Durham. Byrd ushered in four aces while Freeman, Brooke Holt, and Kayla Richardson carried in four total.

Blockin’ and rollin’ was Durham with three blocks and with one each was Wright, Freeman, Vaughn, and Byrd. And piloting her team with digs for days was Richardson with 28. Foster netted 10, Freeman grabbed eight, and Byrd obtained five. “Words can’t begin to describe the appreciation we feel towards our fans,” expressed Coach Bridget Freeman. “What an amazing sight to look out at the home bleachers and see them FILLED with cheering fans. We heard the communities encouragement, felt the enthusiasm, and loved having everyone come out to support our Lady Hornets!”

The Sr High Lady Hornets job isnt over yet though. Up next for Hackett, the girls will be competing in the State Volleyball Tournament on Tuesday, October 29 at 5 p.m. State will be held this year in Yellville. For the first round, the Lady Hornets will be going to battle against the Midland Lady Mustangs who are the #4 seed in the 2A North. The Lady Mustangs sit 6-11 in total season play and 6-4 in conference.