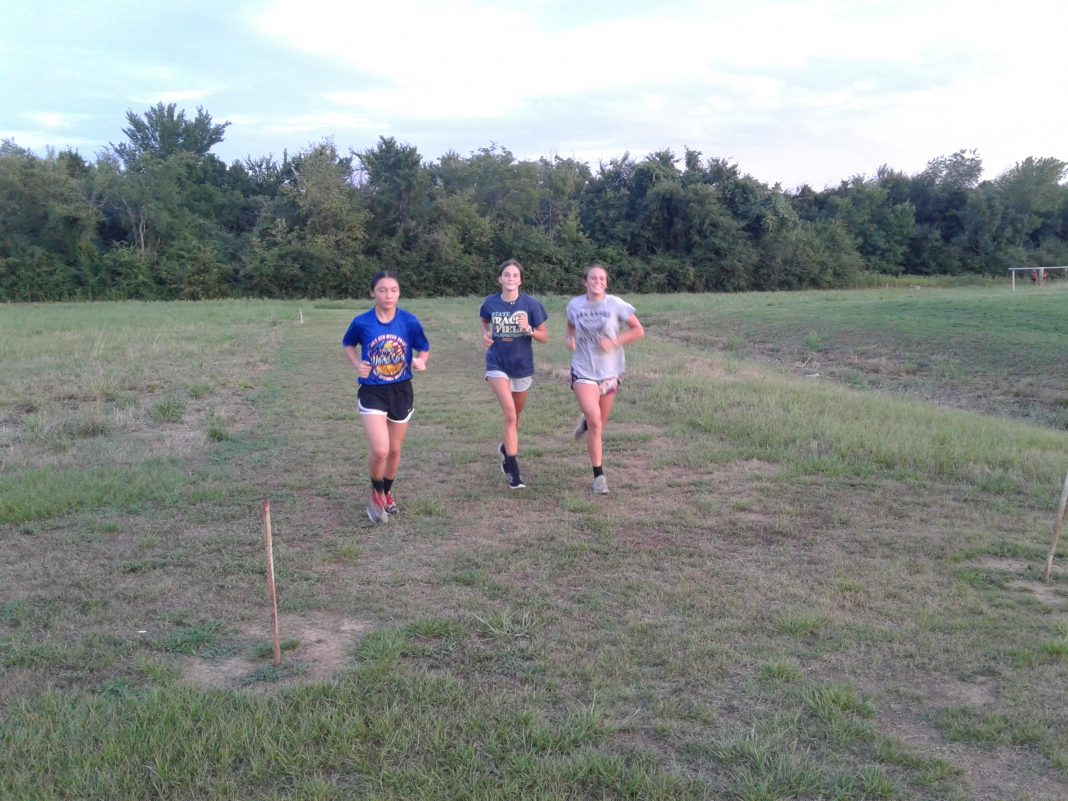 The first month of preseason training is in the books. With that being said, the Mansfield High School long distance runners now turn their focus towards the start of 2022 cross country season.

Pushing past the hot weather workouts and dual sport conflicts, the Tiger distance team has invested many miles since team sessions began on July 11. According to their collective log sheet, the last 12 days of team practices have produced nearly 550 road miles.

Hopes are to turn the preseason conditioning into more race specific training as the beginning of school changes their workout schedule.

Laney Wood, one of two All-State runners off last year’s Lady Tiger team, hopes the July workouts have prepared her for the upcoming season.

“I feel pretty good,” stated Wood after the team’s twelfth practice together. “Honestly, I’d like to make the top five in the state once again. I want to make sure I’m fully dedicated. Jay and I are going to push each other.”

According to the elder of the Wood sisters, it’s their constant connection that makes them push each other to reach their goals.

“We are around each other all the time,” said Jadelynn Wood as she looked towards her younger sibling. “We might fight, then we hug it out. We’re all good. This summer we’ve been pushing each other to run.”

As close as a sister, sophomore Trinity Triska has fit in well with the Wood clan. Triska stays pretty connected to the cross country routine of her teammates despite a concentrated schedule with the high school volleyball team.

“Trinity has been amazing despite the challenges,” said John Mackey, Mansfield’s head cross country coach. “Even when she misses practice for a volleyball camp, she gets some running time. Those three players Laney, Jadelynn, and Trinity work well together. They bring out the best in each other.”

Triska says the busy schedule is just routine for her.

“I’m used to it,” expressed Triska, a first time River Valley All-Star off last year’s team. “It keeps me active. It lets me have something to do. I’d rather be busy.”

Busy has been the theme for a number of potential players on the cross country team. According to the coaches predicted roster, up to 12 athletes could be involved in simultaneous activities during the season.

Newcomer Miley Clopton has discovered that first hand. The seventh grader that joined during cross country’s second week of practice has had to navigate volleyball conflicts as well. Not alone in that regard, seventh grade teammates Adeline Bray, Bailey Quick, and Abby Smith also pull off the double duty.

Rylan Jones, another seventh grade girl that once played little league football, has also found the running task somewhat difficult. However, like Clopton, she too is looking forward to what will come from the hard work.

“Mondays have been the hardest,” explained Jones. “If you run on the weekend, you don’t get a break. I’ve been taking Wednesdays and Fridays off most of the time so Mondays are the hardest. I’m hoping to get a medal at the first race. If not, I’ll try harder.”

Getting medals hasn’t been a problem for third year runner Joey Williams off the junior boys team. The freshmen runner was last year’s 2A-4 Conference individual champion and 10-time medalist throughout the 2021 season.

“My goal is to win the junior boys championship then turn around and win the senior high,” announced Williams. “I’m pretty excited. It’s something I’ve looked forward to for the last couple of seasons.”

Should the freshmen meet his goals in 2022, he will need to contend with newly acquired teammate Austin Ruiz. Ruiz, a sophomore talent that excelled during track and field season last spring, will run cross country for the first time on the senior boys team this fall.

“Austin has had a good camp so far,” said Mackey. “He’s missed a few days because of his job. However, you can tell he’s still getting in miles. He led the pace during mile repeats at the beginning of the week. He and Joey will definitely make each other better.”

The Mansfield runners will take a small break before the start of school. Individuals will continue a maintenance schedule on their own but will not run again as a team until the first week of school.