Timepiece: A Question of Communication 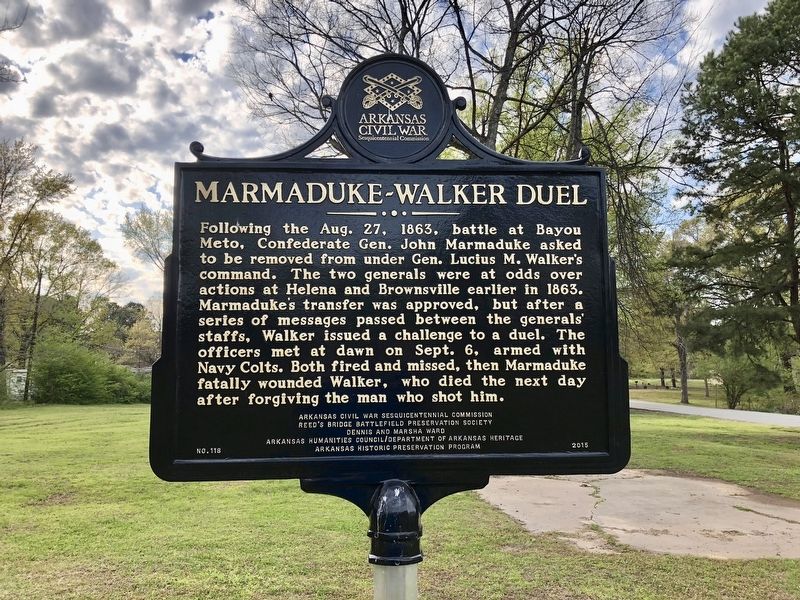 Well, what I thought you meant to say was….. I couldn’t begin to count the number of times I have heard that as a teacher or even stated it myself to my wife or others. What we think we say and how others interpret what we say can create misunderstanding with tragic consequences; none more evident than the Marmaduke, Walker duel during the Civil War.

Generals John Marmaduke and Lucius Walker were both Confederate generals serving under Major-General Sterling Price. Both men, veterans and decorated heroes of various Civil War battles, were assigned to serve in the Trans-Mississippi theater which included Arkansas. The initial confrontation between the two began at the Battle of Helena on July 4, 1863 when Walkers forces were supposed to protect the left flank of Marmaduke’s men. Walker, caught up in the battle and worried about his own forces, failed to assist Marmaduke. As a result, Marmaduke withdrew his men, leaving Walker alone in the fight. Both blamed the other for failure.

Both men, still angry at the other, were then assigned to slow down the Union advance up the Arkansas River to Little Rock. Instead of meeting and airing their grievances, both men began to communicate through a series of notes passed back and forth by John Moore for Marmaduke and Robert Crockett, grandson of Davy Crockett, for Walker. At Brownsville and again at the Battle of Bayou Meto, Marmaduke felt Walker did not provide needed assistance. He asked Walker to come to the front and discuss the situation. Again the communication was by note and Walker did not respond, although one of Marmaduke’s aides remarked in Walker’s presence that Marmaduke had called Walker a coward. The situation was exacerbated with Walker asking for an explanation and Marmaduke claiming he had called him a coward but insinuating that he believed Walker was. All of these accusations were passed by notes. No one knows for sure which asked for a duel; some believe neither did but that it was arranged by Crockett and Moore without consulting the generals beforehand. Regardless, the duel was arranged for the morning of September 6, 1863 on the north side of the river, just a few miles from Little Rock.

Dueling was a matter of honor in the south and most duels previously had been conducted with inaccurate single-shot dueling pistols. More often than not, both men missed, the question of honor was settled without bloodshed, and both men walked away. Not so in this duel. Fought with the new 1861 Colt revolvers and at fifteen paces, bloodshed was unavoidable. Both missed the first shot, Marmaduke’s second shot passed through Walker’s kidney and embedded in his spine. Realizing that death was imminent, he is said to have stated that Marmaduke was an honorable man and should not be prosecuted.

Price ordered that Marmaduke be arrested for murder but, with the Union Army advancing and the Confederates demoralized by the infighting, he left Marmaduke in charge of the rear guard while pulling all troops out of Little Rock. Confederate troops withdrew from the Arkansas Capitol at 11 AM on September the 10th, city leaders surrendered the Capitol at 9 P.M. the same day.

Marmaduke was never prosecuted and eventually returned to his home state of Missouri where he served as governor from 1884 until his death in 1887. The town of Marmaduke, AR. is named for him.

The results of miscommunication were bitterness, hatred, death of Walker, loss of trust. And we say we learn nothing from history!