Timepiece: A Question of Innocence 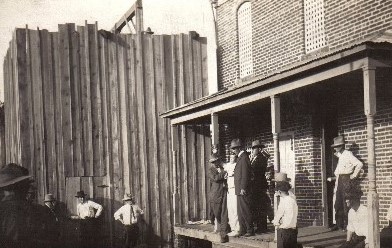 One of the most discussed crime and punishment stories in the state involved the death of young Amanda Stephens and the subsequent trial and hanging of Arthur Tillman.  The story contains every element of a dime-store novel.  A young girl, product of a poor and motherless family, is found dead in a deserted dug well near the small community of Delaware, Arkansas.

Young Amanda disappeared on March 10, 1913 and her body was found in the dug well of a local farmer two-days later.  The autopsy revealed that she had been shot with a 22 rifle, her body tied to a rock by a telephone cord, and thrown into the well. It also indicated she was three months pregnant.  Attractive and outgoing, she had dated several young men in the community, the latest being Arthur Tillman, the son of a local farmer.

Tied to the crime by the circumstantial evidence that he was the boyfriend, that he possessed a 22-rifle, that he had been observed sneaking around the neighborhood where the body was found, a warrant was issued for Tillman’s arrest.  Tillman escaped arrest at his uncle’s house in Knoxville, AR. but was eventually arrested in Fort Smith.

His first trial, held in Booneville, resulted in a hung jury.  Tillman’s primary defense was that Amanda had other men friends and that one of them was the guilty party.  On his way to the state penitentiary to await a retrial, Tillman escaped by jumping from a moving train.  He was recaptured a short time later.  When questioned about his escape attempt, he replied, “I wasn’t trying to escape, just trying to kill myself.”

He was retried in Paris in Oct. of 1913 and sentenced to die on the anniversary of Amanda Stephens death.  He again attempted to escape while being delivered back to the state penitentiary.  Breaking the chains that bound him, he made it to the train door before being overpowered and delivered to jail bound hand and foot.

His family and over one-thousand friends begged the governor for clemency only to be refused.  He was returned to the Logan County jail to await his final sentence.

As the day approached, Tillman continued to profess his innocence. Mr. Ray, the Methodist Circuit minister, begged of him, “Arthur, for God’s sake, tell the truth right now. I want to know if your guilty so I may pray with you for forgiveness.  If you’re innocent, I want to know the whole truth.”  “I am not guilty,” replied Tillman. “If I should confess to that crime when I did not do it, I would die with a lie on my lips. You don’t want me to die that way, do you?”

His last night on earth was a sleepless event.  He failed to eat his chicken dinner but, around midnight, requested a watermelon which he ate ravenously. Early the following morning, services were held in the jail cell and his prayer was long and emotional, primarily begging God to be with his mother and family.

Two deputies assisted him as he walked from the cell to the gallows.  Given a last word, he again confessed his innocence but asked for forgiveness and mercy for those who persecuted him.  His last words to the uncle who was him, “Tell mama I am certainly going to heaven this morning.”

During the trial, Arkansas passed a law that all subsequent executions would be by electric chair, making Tillman the last man hanged in the state.

One hundred years have passed.  Two young people, many family members, and people of the region were forever changed by these tragic events. The Logan County jail still stands in Paris, Arkansas with make-shift gallows erected in the lawn.  A sense of sadness prevails the area and the main storyline yet remains; Guilty or Innocent.