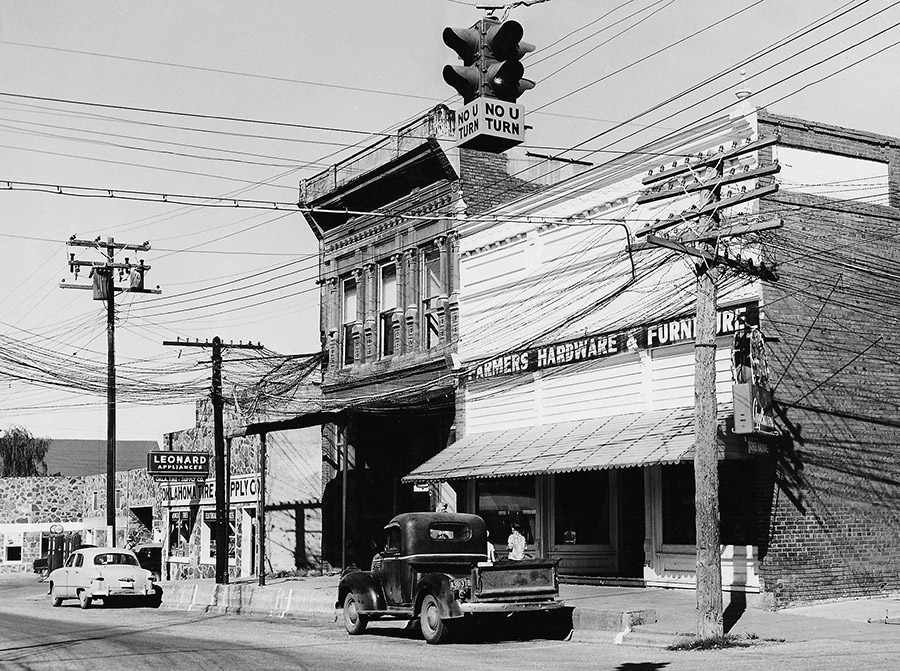 Sitting at my table at the N.W. mall, I observed dozens of individuals sauntering by.  Some were dressed in business like attire with a professional look about them.  Many were casually dressed young kids with brightly colored hair and rings dangling from multiple locations.  Regardless of occupation, social status, or age, the one thing they had in common was a cell phone stuck in their ear while they were carrying on a brisk conversation.

Telephones have long been a facet of Arkansas communities.  As early as 1891, the Parks family started a telephone company used locally in Prairie Groove and extended it into Fayetteville the following year.  By 1906, they had several hundred phones in western Washington County and had incorporated into what was known as the Prairie Grove Telephone company.  Other small towns and communities across the state followed suit, resulting in a hodge-podge of local companies serving smallcommunities.  Telephone companies struggled through the depression years and WWII but really expanded when Rep. Wilber Mills was successful in assisting them with low-interest loans through the Rural Electrification Act (REA). Soon, larger corporations such as ATT and others began to purchase and consolidate into large conglomerates.  One of the larger companies in central Arkansas, owned by Hugh Wilbourn and Charles Miller, consolidated many small telephone companies and eventually created the telephone conglomerate, Alltell.

The year was 1967 and we had just moved into a small community that actually had telephone services.  My dad, starting up a new business selling cars, had decided he needed a phone to conduct his work.  We children had other ideals, our minds filled with thoughts of all the many friends we would now be connected to through this new technological marvel. Unfortunately, his dreams of increased business and ours of unlimited conversations all came to naught.  In 1967, all the rural systems were hooked up to party line.  Many of the “shared” lines were connected to as many as eight households.  Ours was connected to only four but the four we shared our lines with were avid conversationalists.  To those unaccustomed to party lines, the term meant that three other households shared one telephone line with you but only one household could use the phone at a time.  Anyone picking up the phone could hear the conversations being conducted by the other line members.

The telephone company asked that people on the party line limit their calls to five minutes but our party line either had no clocks or measured time with a sun dial.  I remember vividly wanting to make a call only to hear our neighbor Mildred exclaim to one of her sisters, “I’ll be right back.  I’ve got to run outside and hang up the clothes.”  I could hear the thump as she laid the telephone down on the table and went out the back door, leaving the line tied up while she worked.  We learned quickly that we could keep up with all the news and gossip in our community by listening in to the conversations.  If you unscrewed the mouthpiece from your digital phone, you could catch hours of information that was not available on channel 5 news. Telephone pranks were rampant.  My brother Roger once called Mildred and posed as a telephone lineman.  “Are you having some problems with your telephone clicking,’ he inquired.  Everyone did of course.  When she replied to the affirmative, he informed her she had entirely too much line from her phone to the wall.  “Just give it a good yank,” he instructed.  She must have followed his instructions because there was a sharp pop on the line as the cord was extracted.  We had extensive use of the phone for a couple days until the line was repaired.

Today, according to an article I read recently, there are more telephones and cell phones in America than there are people.  The mall certainly has its share!! A couple sit down at the table next to me, the woman talking excitedly on the phone. “Oh Jill, have you heard the latest,” she asked.  This was too good to miss!  I scooted my chair over closer, enjoying the moment.  Ahh, just like ole times!!!

Tammy Teague
Tammy is the heart behind the brand. Her tenacity to curate authentic journalism, supported by a genuine heart is one her many wholesome qualities.
Share
Facebook
Twitter
Linkedin
Pinterest
WhatsApp
Email
Latest news
Obituaries