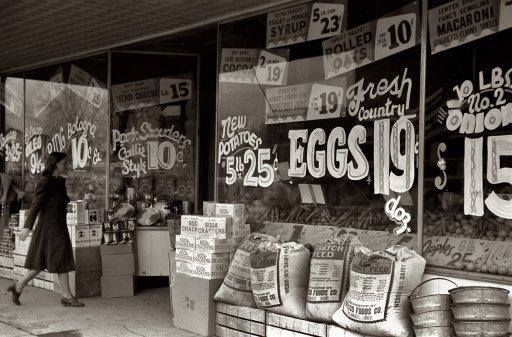 It takes a lot of peas to make a hundred pounds!!!  That thought was constantly in my mind as I crawled down the row shoving dried pea shells into the canvas sack I was pulling.  Leroy Wade had planted acres of the peas and was paying us a whole $3.50 cents per hundred to pick them.  As soon as school was out, our entire clan would head down the road and work till sunset picking the peas.  On a good afternoon I might make $2, not bad when you could pay a week’s school lunch for a dollar or buy a pop cola and a hamburger at the small stand just off campus for twenty-five cents.

Later, I started working at Warehouse Market grocery store and my starting salary was $1.45 an hour.  Months later, the minimum wage went up all the way to $1.60 an hour.  I remember clearly the day I interviewed for my first teaching job.  Mr. Ehren, the superintendent questioned prospective employees about all kinds of stuff, most of which wouldn’t be allowed today but, he wanted only the best to work with his school kids.  Did I live in the community? Was I a church member?  Would I assist with duties not assigned such as chaperoning groups, work ball games, or sponsor clubs?  Then came the hard question, “do you owe a lot of money.”  I had worked my way through college and paid as I went.  “Mr. Ehren,” was my worried reply, “my son was recently in the hospital with pneumonia and I owe them $400.”  He laughed, “Ninety-nine percent of the people in this town would like to change their debts for yours.”  Four-hundred might not seem like anything but it seemed a mountain of debt to me at the time.  I was hired on the spot making $8,800 dollars per year.

People are always sharing history with me and I received the old 1930’s menu from the Buckman Inn on Magazine Mountain.  Room and board was $2 per day or $8.75 per week.  Food prices at the Lodge included $2.50 for a sirloin steak dinner, plate lunch for 65 cents, and desserts for a dime.

Gerald Rice shared an old grocery add from the 1970’s newspaper.  It is hard to believe prices were ever that cheap.  The center of the add had a large rocket and was entitled a rocket of values at .29 cents.  This include pie filling, picnic hams, regular box of tide, lunch meats, dozen eggs, and a two-pound box of oleo.  At the time, hamburger was three pounds for a dollar, soda a dime a bottle, gas was 29 cents a gallon, and milk was 59 cents a gallon.  What a bargain, but we were making a whooping dollar and fifty cents an hour if we were lucky.

Why the sudden interest in prices?  I was recently in Los Angeles.  Gas was $5.69 cents per gallon!  Engaging in conversation with a person I sat next with on a boat tour, I found that he was mechanic, made six figure plus a year, paid a house payment of $3,900 per month, and lived from pay check to pay check.  Minimum wage in California was $15 per hour but people making that were living in their cars or on the street.  Even in Arkansas, with much smaller expenses, inflation rates were staying way ahead of salary increases.  I make multiples of any salary I dreamed of in my youth but my standard of living, in comparison, is about the same.  The twenty-nine cent a dozen eggs are now two dollars, the twenty-nine cent gas is now three dollars, and soda is over a dollar a bottle.  Another facet of inflation is that many of the starter jobs have been eliminated.  There are no grocery sackers and, in most stores, you must check out your own purchases.

Wages go up, prices go up, and I have found it a necessity to have a good work ethic and keep your nose to the grindstone to survive.

Tammy Teague
Tammy is the heart behind the brand. Her tenacity to curate authentic journalism, supported by a genuine heart is one her many wholesome qualities.
Share
Facebook
Twitter
Linkedin
Pinterest
WhatsApp
Email
Latest news
Obituaries