Timepiece: Tough Times and Tougher Me 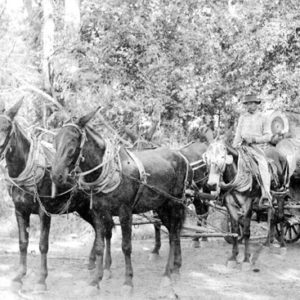 The small tractor struggled to load the cedar log onto the rollers but, with three of us tugging and pulling, we finally managed to get it in place for the portable band saw to cut it into usable board. Semi-automated, my friend Wes Davis quickly sawed the cedar into beautiful boards that I used in the new addition to my home. By the end of the day, I was exhausted from cutting the trees, moving the logs into place, and then stacking the finished product. Dragging my sore, worn out body into my air-conditioned vehicle to go home, I realized how soft I was compared to my ancestors.

When the first settlers came to Arkansas, trees were in abundance and were harvested for building and fuel but there was no real market until the industrial expansion after the Civil War. With plentiful hardwood in the delta and the mixed forests of the mountain region, Arkansas was a natural to supply the lumber needs for the nation. Large lumber companies sprang up in Fordyce, Camden, Crossett, and other towns; centers to process the forests that were being harvested. Smaller operations sprang up in virtually every small community across the state. These were often feeder operations for the larger mills and employed large numbers of people across the state. The local mills operated on steam engines and used huge circular saws to hew the logs into useable materials but the real work was getting the logs cut and to the mill.

In 1900, trees were downed using two man cross-cut saws and wedges. Operating from opposite ends of a saw six foot or more in length, the men tugged the blade back and forth through the tree advancing inches with each pull. As they sawed, wedges were driven into the tree to direct its fall in the correct directions and path. The tree was then cut into suitable lengths and pulled out of the forest using teams of horses or mules. Logs were then “skidded” onto the bed of the truck or wagon by building a ramp of small limbs and tugging the logs with hooked tools called a cant. The job became more and more difficult as the load increased in size. Some of the best timber was found on the steep sides of mountains and required getting the load down slopes that were close to vertical on tracks that passed for roads. Exploring in the Ozarks or Ouachita Mountains, you can often discover the old forest tracks in places thought inaccessible and runaway vehicles and accidents were common.

Nearly every small town contained a shake mill, a stave mill, and a lumber yard. The shakes were used as shingles for roofing, staves were made into barrels, and the common use of logs was to make railroad ties.

By my father’s time, logging became easier due to the development and use of powered chainsaws. The first were two-person saws and were heavy, often two-wheeled, devices that had to be man-handled through the forest. In 1948, McCulloch developed a one-man saw weighing ONLY 25 pounds. Dad was cutting charcoal wood for the companies in Ozark, Paris, and Scranton. One of my neighbors cut pulp wood for the paper mill and loaded the six-foot long pieces onto his truck by hand. With huge arms and shoulders, he looked like a world-class weight lifter.

Several lumber trucks sit at the truck stop near Mena, the drivers stopping for coffee and snacks on their way to lumber yards. Large, strong hard-working fellows they sit around the table exchanging stories and straightening out the world’s politics. Their jobs may not be as difficult as

a few years ago, but they still are a man’s man and carry on the hard labor and traditions of our ancestors.

I really enjoyed my day sawing logs but, on reflection, that office chair on Monday is looking much better.