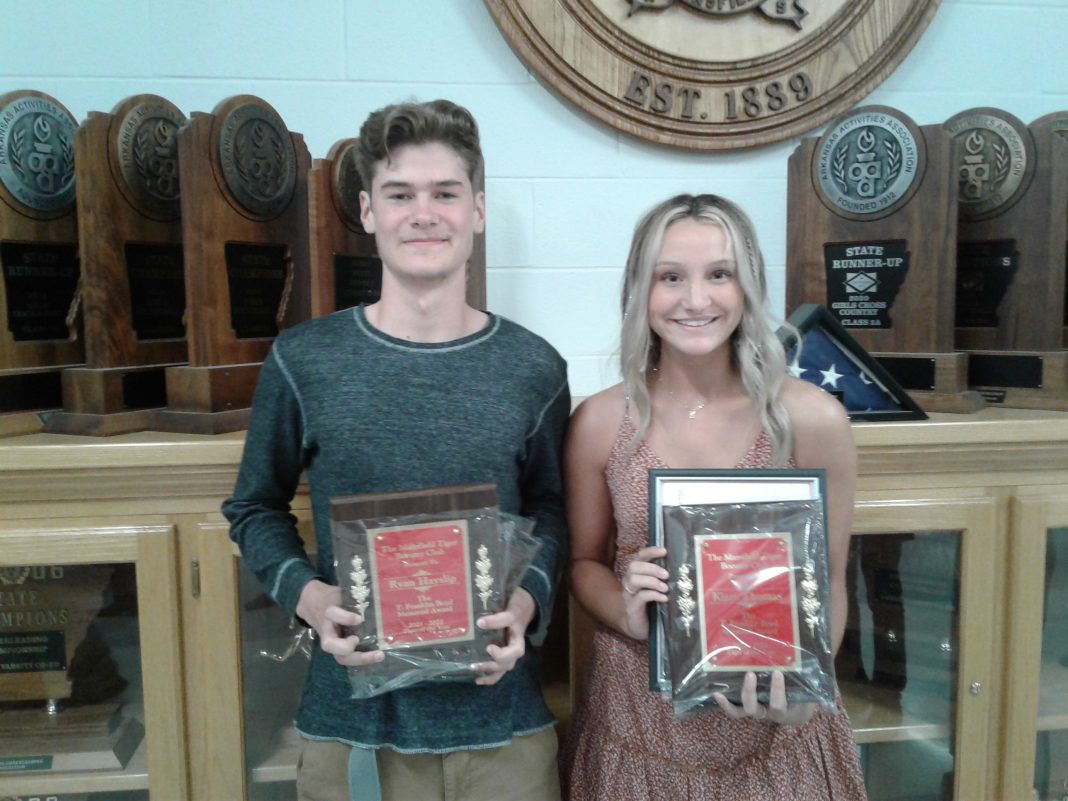 The 2021-2022 sports season is still ongoing but the Mansfield Tiger Booster Club completed its year end sports awards show nonetheless. Before a very large crowd of athletes and family, the top Tigers of each sport were announced along with the T. Franklin Boyd award winners and the freshmen Rising Stars.

The highlight of the show was the announcement of this year’s anticipated T. Franklin Boyd award winners. Recognized in honor of the late Mr. Boyd, an avade Tiger fan, the female and male recipients were Kiara Thomas and Ryan Hayslip.

Thomas was honored as the senior class valedictorian as well as an accomplished athlete from the school’s state championship volleyball team, cheer squad, and softball team. Hayslip was a top 10 graduate that starred as an All-State pole vaulter and college bound All-Star cheerleader.

This year’s Rising Stars were Trinity Triska and Trey Powell. The two recipients received the prestigious coaches award as the top freshmen athletes.

Triska was a five sport star with All-State credits from two of those this past school year. She leads her class in academics as well. Powell was an All-State track athlete that shined on the football field as well as the classroom.

Among the many statistical, district, and state awards; the coaches of each sport had their Player of the Year candidates introduced.

The only sports that did not issue their POY recipients were baseball and softball. Those two sports have not concluded their seasons. The two conference championship teams will move into state tournament play this week.

MHS coaches Ethan Bowman, Donnie Eveld, John Mackey, and Layton Robinson were recognized as Coach of the Year recipients from the 2A-4 District.

Bowman was awarded for his work with the conference’s top  Lady Tiger basketball team. Eveld for his leadership directing the championship softball squad. Mackey took a pair of plaques for winning both the cross country conference and track conference for senior girls. Robinson landed the top mentor prize for his undefeated conference baseball season.

Tracey Barnette was also recognized as a retiring member of the Mansfield staff. Barnette was a two time state championship cheer coach. She served the district for over 18 years.

Tammy Teague
Tammy is the heart behind the brand. Her tenacity to curate authentic journalism, supported by a genuine heart is one her many wholesome qualities.
Share
Facebook
Twitter
Linkedin
Pinterest
WhatsApp
Latest news
News