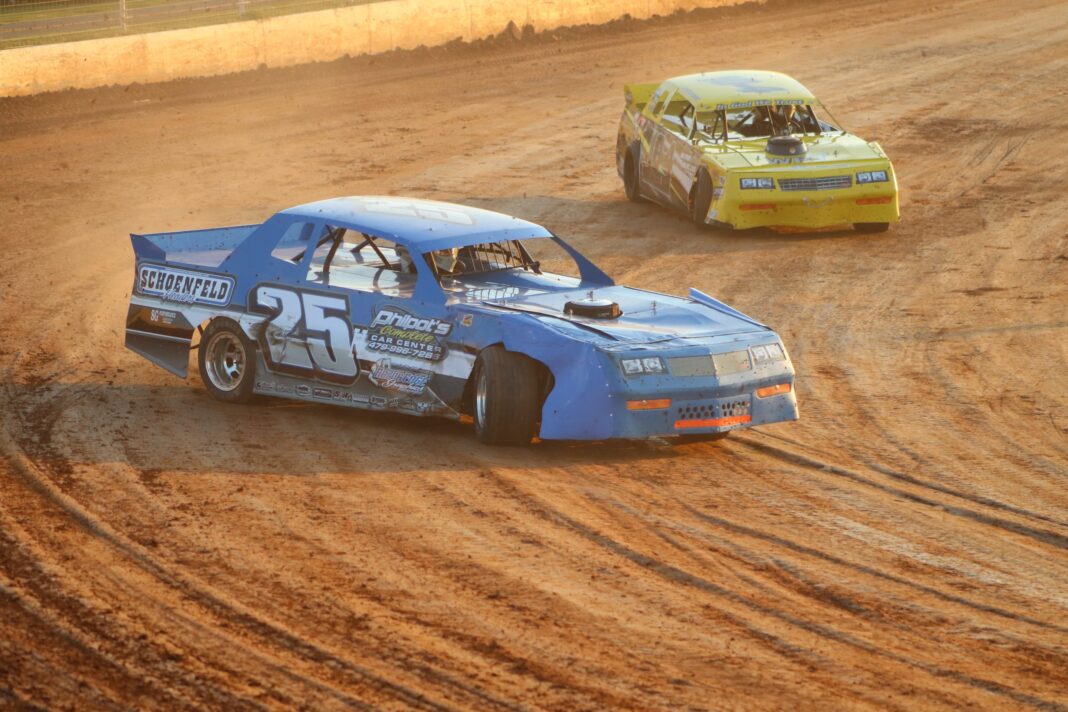 After a season that was filled with Covid guidelines and weather issues the 50th season of Tri-State Speedway was a banner year for the track high up on the hill. A total of 17 race weekends were action packed on the high banks in Pocola. Oklahoma drivers Grant Davis, H Wayne Palmer, and Cody King won the Factory Stock, Super Stock, and USRA B-mod track Championships respectively. Alma, Arkansas driver Lonnie Robins would take home the championship in USRA A-Mod.

With the 51st season just around the corner, the schedule for 2021 features 19 race weekends running from April to October. Kicking off the season is the 42nd Annual Kegger Honoring Cecil Harlin on April 29th. Harlin was a longtime promotor and owner for the Speedway, that had a knack for not only promoting the track but the drivers as well. The Kegger is a 3 day event with a test and tune on Thursday, Qualifying on Friday and Features on Saturday.

15 days after the Shootout, the United States Modified Touring Series (USMTS) rolls through the gate for the $10,000 to win Drive4JRT.com Juggernaut. This will be the 1st of 2 races for the USMTS as the series returns October 28th for another $10,000 to win feature, the USRA/USMTS Modster Mash King of the Ring. The series brings the heavyweight fighters of the Modified racing with drivers from all over the country going track to track to win the USMTS National Championship.

Rounding out the month of May is the Memorial Day Weekend Special on May 28-29. The USRA B-Mods gets a three day race. June 3-5. There will be a preview of the classes in the following weeks.

Regional touring series Ca$h Money Super Dirt Series Late Models come to Tri-State Speedway on June 12th. This will be the first of two shows for the Late Models as they return September 11th. Ca$h Money Late Models emphasize cost savings in the parts for the car, by having the cars run the same specified part.

The first weekend without a special guest rolls in on June 26th, while points will be awarded at the races leading up to the end of June. This will be the first Saturday night with just the specific classes to the track. There will be three more race nights of just track classes sanctioned by the United States Racing Association (USRA), those dates are; July 10th, July 17th, and August 28th.

July 3rd is the 50th Annual Firecracker Spectacular honoring Curtis Tennant. Tennant was a resident of Greenwood and an avid racer at Tri-State Speedway. From racing to being a Tech Man at the Speedway, Tennant was known all over the local racing scene. Sadly he passed away in 2013 and each year the track honors him with their Independence Day race and giant fireworks show just as the sun sets.

July 29-31 is the USRA Factory Stock Special honoring Danny Martinez. This is a big night for the Speedway as all Police Officers, Firefighters, EMS, and First Responders are invited to come out and particepate in several laps at the track. It honors the life of Danny Martinez, who was a Fort Smith Police Officer who was killed in the Line of Duty in 2007. Officer Martinez was also a racer at Tri-State.

Labor Day Weekend brings the 23rd annual Super Stock Showdown honoring Randy Russell. One of several big money Super Stock races it attracts cars from all over Arkansas, Oklahoma, and Missouri. A win here and wins at the Mid-America Super Stock Championship at Batesville Motor Speedway, and the Big Buck 50 at Lucas Oil Speedway in Wheatland, Missouri. Gives a rare chance to win some great money and an unofficial Super Stock Triple Crown. Randy Russell was a racer in the Super Stock class up until is unexpected passing in 2019. He did a lot for local racing by sponsoring several races under the National Recovery Services banner.

Just one more special to round out the 2021 points season, on September 23-25 the USRA Stock Cars get their time to shine with a three day event. The following weekend, points racing concludes with the 51st Annual Point Championship Races the honor Tri-State founder Tillman Evans. Evans built the track starting in 1970 and opened midway through 1971 as a dirt track known as Mighty Mouse Speedway. Later in 71 the track was enlarged and paved which became a success with the speeds and the high banks. Future NASCAR legends Mark Martin, Rusty Wallace, the late Dick Trickle and Larry Phillips would make the trek to Pocola. With all the drivers coming in the name was changed to Tri-State Speedway and switched to dirt in the ’79 season. Evans’ Grandson Ty Evans is a weekly racer at the track and can be found piloting the white 5E in the Super Stock class in the most recent seasons.

Winged Sprint Cars make their appearance at the Speedway, albeit later in the year than their usual first half of the schedule slot. The American Sprint Car Series brings the Sooner Region and the Mid-South Region to do battle on the 3/8 mile oval. Last years race brought 30 Sprint Cars to get a shot at the 20 car, 25 lap A Feature. Blake Hahn from Sapulpa, Ok put on a dominating performance, as he used the top of the track to get the front and never looked back.

Rounding out the end of the season is the 42nd Annual Spooker honoring John Stand. If you ever wanted to go to party and race breaks out, than this is the one for you! Four days of on track action that brings together classes from surrounding tracks that is non-stop from Wednesday night to early Sunday morning. Last years race saw 400+ cars roll through the gate and stands that were to Covid guideline capacity. Get there early as it is hard to find an open spot. Last year, Marshalltown, Iowa native Ryan Gustin came to town and made history by winning the marque races of the night USRA A-mod and Late Model literally back to back. Gustin pulled his A-mod into victory lane then hopped in a side by side to his Late Model in the middle of the track. Then ran away with a win in that feature.

The race honors John Stand who was a longtime local racer and a darn good one at that. His success on the track and personality off made him a crowd favorite. When he passed away in 2017, I was still a new track photographer at the track, but it was certainly a week I will never forget. Stand had passed away the day before the Spooker race weekend was to run their first races and almost immediately the tributes at the track started to roll in. Memorial laps were done, cars changed their number to 6 as that was his number, it was just an incredible weekend.

With all the racing on tap for the season it is easy to find a race that fits your schedule. Check their Facebook and Website tri-statespeedway.com for Admission and pit pass pricing. After each race weekend I will be posting Ross’ Roundup giving a recap of the races.