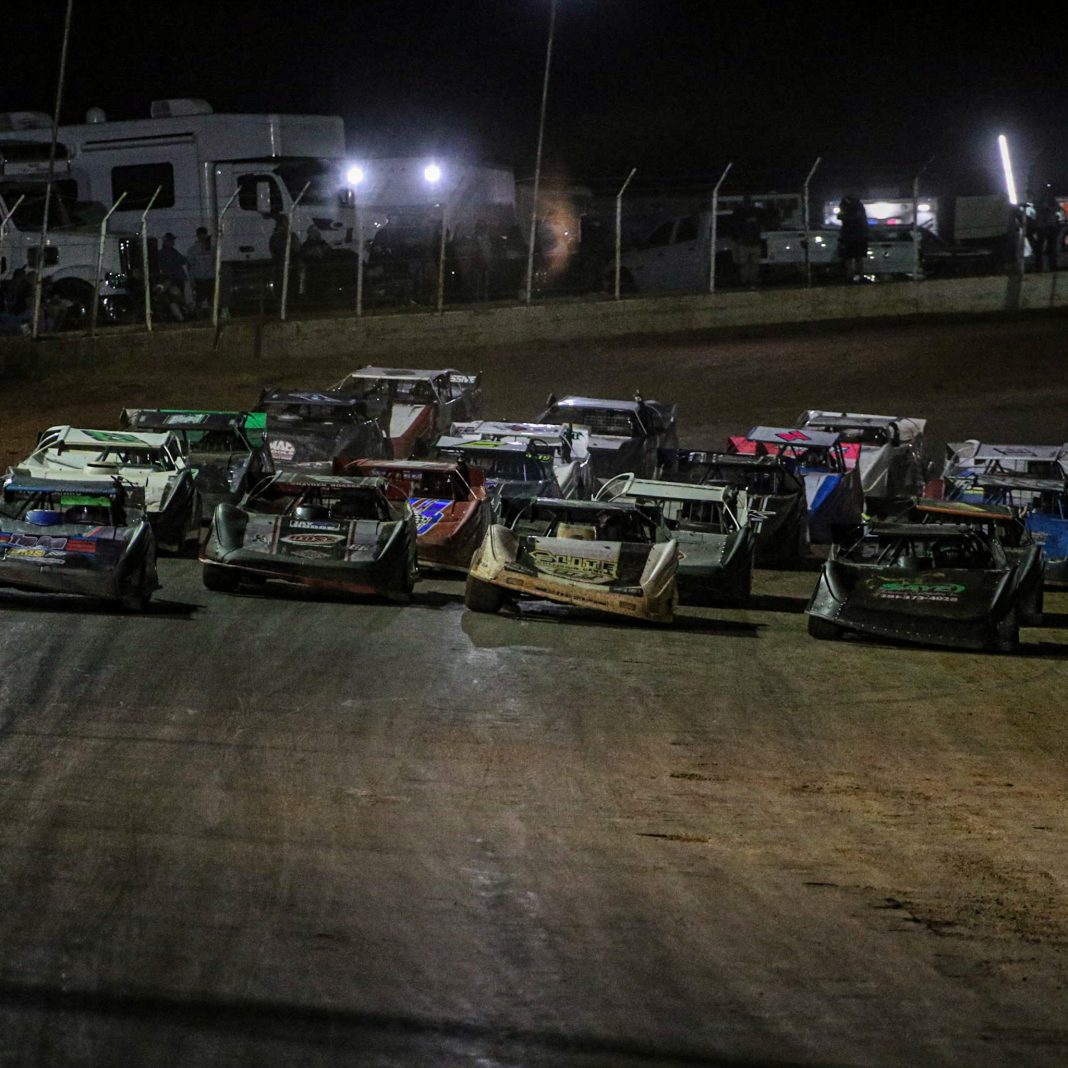 2022 was the 52nd points season for Tri-State Speedway in Pocola, Oklahoma. One driver went back to back another went to back to back but in a different class.

Three of the four classes were up for grabs Saturday night, as Neil Johnston of Fort Smith claimed the USRA B-Mod Track Championship the week before. Greenwood’s Jeff Tennant trailed Denver Lee of Whitt Springs, AR by one point in the USRA Stock Car class. Jason Payton of Greenwood held a 52 point lead over Brent Holman in USRA Modified. In USRA Factory Stock Rock Island’s Wesley Bourne held a 66 point lead over Marshall Penson of Van Buren. In a season that saw it’s far share of wild moments, three championships held in the balance.

The Late Models kicked off A-Feature racing with Cody Leonard of Sinton, Texas jumping out to the early lead. After a few laps it seemed is closest competitor was multi-time Tri-State winner Cole Wells out of Aurora, Missouri. Traffic would play a huge role in the 25 lap feature as Wells would get past Leonard and not look back. A mid-race Caution from an issue on Eddie Martin’s Late Model would bunch the field up one last time. On the restart, Wells had a rear-view full of Leonard and Kip Hughes, but that would be the closest they could get as Wells dominated the remaining laps. “These guys raced us real clean all night long, every time I raced with someone side by side they gave me a respectable amount of room.” Cole Wells said after his win. “I’ve done a lot here with Cash Money [Super Dirt Late Model Series]. Tonight had a little bit more texture, made for a really good race surface. You could do multi-grooves.”

In B-mod Kort Morgan of Muskogee, Oklahoma would lead them to the Green. 2022 class champion Neil Johnston would take the lead on lap 2. A caution for Daniel Cowett bunched the field back up and that was exactly what Jacob Campbell of Hackett, AR needed. Campbell would get Johnston one lane further up than he had been running and was able to make it stick for the lead. Four more cautions would come out with Muskogee’s Dalton Ragsdale making it up to second to challenge Jacob Campbell for the lead. Campbell would hold on and get win number 2 at Tri-State on the season. Dalton Ragsdale would finish 2nd, Neil Johnston 3rd, Martin Hemphill of Spiro in 4th, and Springdale’s Tye Hollingsworth rounding out the top 5.

USRA Stock Car would take to the track with point leader Denver Lee rolling off in the Pole Position and 2nd place in points Jeff Tennant right behind him in Row 2. Drama as Tennant and Brandon Hunter get together in turn 3 and 4. Tennant goes to the back albeit without a nose piece and tries to charge back to the front. A spin by Hunter brings out the second caution, brought out emotions from Tennant as he was disqualified sending him back to the pits. Denver Lee is then left to battle Mt. Ida’s Chad Abernathy, who was the 2021 Track Champion in Factory Stock. A hard charging Brandon Hunter, who had gone to the rear of the field for his spin made a last lap pass on Abernathy to get 2nd. Denver Lee would pull the double winning the feature and the Championship.

USRA Modifieds, Pocola’s Jeremy Vaughn would get the A Feature started, but Roy Long out of Stilwell, OK would take the lead on lap 2. Eventual track champion Jason Payton and Brent Holman would battle the whole race in the 5th and 6th position. Roy Long would battle with 4 time winner this season Tyler Wolff for several laps until Wolff got by Long when traffic pushed the 17X up two grooves leaving the door open. From there it was a Wolff as he got the win pushing his total to 5 on the year. Jason Payton would finish in 6th behind Holman but it was all he needed to win the Championship by 49 points.

Kenneth Reynolds would lead the group of 13 USRA Factory Stocks to the green. Point leader Wesley Bourne would start 2nd. The only caution of the night was for Fort Gibson’s Graci Williams and Shawn Blair getting together in Turn 1. Light contact between the two and they both re-fired and were able to finish the race. Rick Edgerton would get out front and hold off Bourne and Reynolds for the win. Ty Abernathy of Mt. Ida and Rowdy Bonewell of Rudy would round out the Top 5. Wesley Bourne goes back to back in different classes after capturing the 2021 USRA Stock Car Track Championship last year. Bourne adds this championship in the full body cars to the ones he won at Tri-State in 2017 and 2019.

Front Wheel Drives presented by Drive4JRT.com saw Chris Tuck lead them to the green in his Honda. The first caution would come out as Chris Davis in a Nissan Sentra and Cassie Maul in a Volkswagen Jetta get together at the entrance to the pits in Turn 4. Aaron Dyer would bring out a 2nd Caution after performing a perfectly executed barrel roll in turn 1. Chris Perkins in a Honda Prelude would get past Tuck to take the lead and the win. Colton Reed in an Acura RSX would finish third making it a 1-2-3 for Honda powered racers. 4th place went to Chris Davis and was the final running car in the finishing order.

Asked Track Owner Michael Hoover his thoughts on the season after the races. “It was pretty tight racing all year long. We’ve had multiple different winners, last year we had 38 different winners, this year I don’t have the actual total. To only win 2 or 3 races and some classes have not won an A feature and still be able to win the points, that’s a big deal.” He dove further into parity between the cars and drivers week in and week out. “Going to this USRA [sanctioned] Class across the board you can tell a lot of the races are won at the finish line at zero point something seconds. Hats off to my track crew to provide a surface that they can move around like that.”

Tri-State is off the next two weekends as they prepare for the two big end of the year events. The 43rd Annual Spooker gets under way with a test and tune on October 19th and racing begins Thursday night October 20th through Saturday night October 22nd. Currently there is over $80,000 up for grabs with more being added nearly daily. Friday and Saturday night for the last two years have averages 240 cars entered. The very last race of the season is the Modster Mash, they have tried several times to have this race as it is part of a 4 race series with the United States Modified Touring Series surronding the Halloween weekend. Mother Nature has found a way to foil the plan.