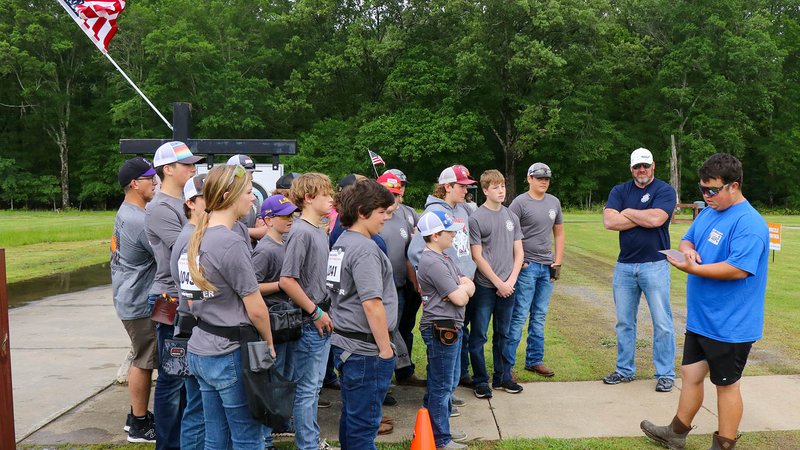 With the wind down considerably from the day before, the shooting Saturday picked up for the senior division in the West Regional of the Arkansas Youth Shoot Sports Program championships. God’s Great Outdoors Trap Team 1 from Farmington had a solid day from its five shooters and won the regional at the Arkansas Game and Fish Foundation Shooting Sports Complex here.

Lex Nielsen had just one hiccup in his 50-shot round for God’s Great Outdoors, missing his sixth shot of the day before finishing off a 49-for-50 performance to lead his squad. Morgan Jacobs hit 46 of 50 clays, Beau Lovell and Lex’s brother, Leo Nielsen, both connected on 45 of 50 targets, and Jacob Ogden rounded out the consistent team effort with 44 clays, as God’s Great Outdoors totaled a 229 out of 250 attempts, edging Fort Smith’s Minutemen Blue by three clays.

The God’s Great Outdoors Trap Team practices out of Prairie Grove at a field provided by a church elder, but it calls Farmington home as its head coach is based there. The shooters come from a variety of schools in the area.

Rayce Neal of Minutemen Blue and Aiden Armer of Huntsville 4th Squad both had perfect days, hitting all 50 targets to qualify for the Champion of Champions shootoff, which will be held after the Senior State Championship here on June 4. Landon McCullough of Rosebud was the only qualifier from last week’s North Regional.

Accuracy in Motion’s Senior Squad 1 was right behind the Minutemen with a 225 total. Cedric Justus led the way with 47 clays, Aubrey Justus hit 46, Allie Bowerman connected on 45, Aaron Washburn had a 44 and Dakota Newman hit 43.

The top 16 West senior teams from Saturday advanced to the State Championship, which will be held June 4, as they compete against the best shooters from the other three regions:

Although most scores during Friday’s meet were modest, Alma Youth Trap Club’s Smoke team played the wind and walked away with the top spot in the Junior Division with an overall score of 101 out of a possible 125. Whyatt Brister shot the team’s high score of 22, and teammates Trevor Simon and Blake Gregory followed close behind with scores of 21. Team captain Chase Wood, with 19, and Asthon Milsap, who hit 18 targets, also had strong scores.

The Berryville Shooting Sports Fuzzie Monkeys came one clay short of first place, with an overall score of 100 out of 125. Third place was claimed by Shiloh Christian Black Aces, who posted a final score of 91.

The top 16 West Junior teams advanced to the AYSSP State Championship, which will be held June 3, to compete against the best shooters from the other three regions:

The South Region takes the stage next with juniors competing on Friday and seniors on Saturday. Both rounds begin at 9 a.m. There is no admission charge, and youngsters can enjoy an archery station; fishing for stocked catfish at the complex’s pond; food, photographer and gun equipment vendors; and more. East Region teams will conclude the regional action on May 20-21. After a week off for the Memorial Day holiday, the 64 remaining teams in both juniors and seniors converge in Jacksonville June 3-4 for head-to-head tournament bracket competition to determine state championships.

Complete team and individual scores are available at https://apps.agfc.com/ayssp.

Tammy Teague
Tammy is the heart behind the brand. Her tenacity to curate authentic journalism, supported by a genuine heart is one her many wholesome qualities.
Share
Facebook
Twitter
Linkedin
Pinterest
WhatsApp
Latest news
News