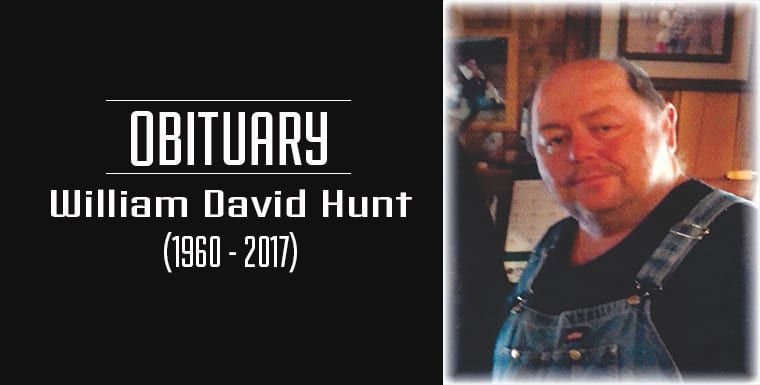 William David Hunt, better known as Bill, of Dutch Creek, Arkansas went to be with his Lord and Savior, Tuesday, November 14, 2017 in Little Rock, Arkansas. Bill was born July 2, 1960 in Danville, Arkansas to Audie and Effie Black Hunt. Bill was 57 years old.

As a young man Bill met and married the love of his life, Vonda Reed Hunt. Together they spent 36 years of raising five children and then they enjoyed being grandparents. Above all else, Bill loved his time spent with his family and friends. Bill was known for his hard work, but when he had some down time he looked forward to going hunting. He has taught many youngsters the love of the outdoors. Friends and neighbors alike could always depend on Bill for anything needed.

Bill leaves behind to cherish his memory, his loving and devoted wife, Vonda of the home, five children: Jodie Slater and husband Lynn of Dutch Creek, Arkansas, Ashley Manning of Waldron, Arkansas, Tesia Owens and husband Clayton, Audie Hunt and Haleigh Wilson and Evan Hunt and Emily Hale all of Dutch Creek, Arkansas. Papa will forever remain in the hearts of his grandchildren: Darin, Korbin, Karlee, Kason, Natallie, Austin, Effie, Hunter, Heaven and Faith as well as two new babies due in a few months. Bill is also survived by his siblings: Jerry Hunt and wife Billie, Deborah Horn and husband Lewis, Tammy Sanders and Beth George and husband Jim. Bill will be missed by all that knew him and the many whose lives he impacted, including a host of nieces, nephews, extended family, cousins, friends, neighbors and loved ones dear to his heart.

Bill was preceded in death by his parents, Audie and Effie Hunt.

Bill’s graveside life celebration will be at 10:00 a.m. Friday, November 17, 2017 at the Hunt Cemetery in Dutch Creek, Arkansas with Rev. Larry Pat Millard officiating. Interment will follow. Arrangements and cremation are being entrusted to the Heritage Memorial Funeral Home in Waldron, Arkansas.

You may leave words of remembrance for Bill’s family by visiting: www.heritagememorialfh.com.