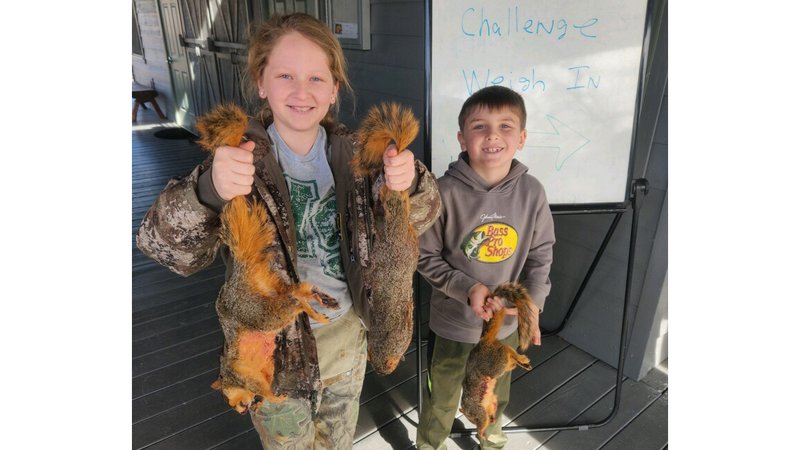 With more than 110 teams participating in last weekend’s statewide Big Squirrel Challenge, hunters young and old were rekindling the passion of small game hunting throughout Arkansas. When the sound of rimfire rifles and shotguns had ended for the morning and weigh-ins were concluded, it was a youth team in northern Arkansas who turned in the day’s heaviest three-squirrel limit.

Hank Duren and Sophia Layton brought a bag of three fox squirrels to Fred Berry Crooked Creek Nature Center in Yellville that weighed in at 2,420 grams (5 pounds, 5 ounces). Not only was this good enough to take top honors in the statewide youth division for a bag of fox squirrels, it was the heaviest three squirrels any team turned in for the day.

Yellville produced another team that took statewide honors. The team of Emma and Zoey Wyatt brought in the day’s largest three-squirrel bag of fox and gray squirrels combined in the youth division with 1,970 grams (four pounds, 6 ounces) of bushytails.

Four categories were listed for this year’s competition, two adult and two youth. The difference between the categories was whether the participants weighed only fox squirrels or had a mixed bag of fox squirrels and gray squirrels.

In the adult competition, Blake Goodine and Kristian Starnes took the statewide fox squirrel title with 2,060 grams (4 pounds, 9 ounces) of fox squirrels. They weighed their squirrels in at the J.B. and Johnelle Hunt Family Ozark Highlands Nature Center, the place where the first squirrel challenge began.

“We actually started the squirrel hunting competition at that center in 2020, not too long after it opened,” Maynard said. “That first hunt was small, but we saw some real potential in it and expanded it to become a statewide event last year. Now we’re already coming up with ways to make next year’s event even better.”

Ted Zawislak, north Arkansas private lands supervisor in the AGFC’s Private Lands Habitat Division, said that the event was a great collaboration between different divisions of the AGFC, with Education professionals giving presentations and helping promote the event and biologists weighing in the squirrels.

“The response from the public was great,” Zawislak said. “We even had one man and his grandson travel from Illinois to participate in the event. He has done squirrel-hunting competitions in Canada and his home-state, and said ours was one of the best.”

The AGFC had 11 weigh-in facilities throughout the state, which were advertised through social media, newsletters and agfc.com for weeks leading up to the event. The top two teams at each location received medals, and Gamo air rifles were awarded to each of the statewide winners. Door prizes and activities also were available at weigh-in locations to bring more atmosphere to the event. Teams were allowed to hunt legal shooting hours from noon Friday until noon Saturday. No registration was needed; teams just needed to arrive at a weigh-in station by 1 p.m.

“We saw a 65 percent increase in participation from last year, but it honestly may have been much better than that,” Maynard said. “Since teams didn’t have to register beforehand, we could have had quite a few more folks out there squirrel hunting who didn’t get enough big squirrels to come visit a weigh-in site.”