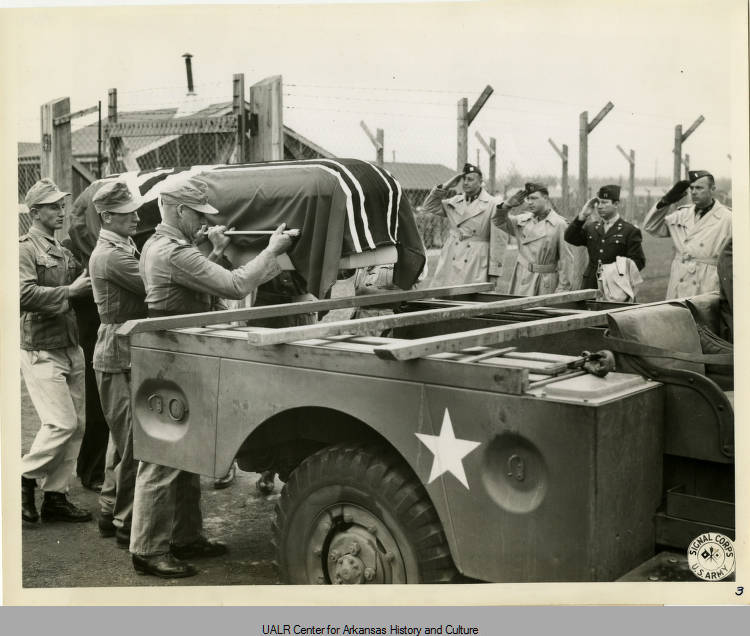 Fort Chafee was created in 1941 as a training military training camp for those about to depart to fight WWII.  A little know part of the story is that the area also served as an internment area of German prisoners of war.

Nearly 23,000 captured troops, mostly from Rommel’s Afrika Korps, were sent to POW camps in Arkansas.  Nearly 4,000 of those prisoners were sent to Chaffee where they were housed on a remote 83-acre section of the fort.   It must have been quite a welcome shock to see the verdant green country-side of Arkansas after spending years defending the sands of North Africa.

The Afrika Korps were an elite group and most of the men decided to make the most of their time in captivity. In an article by Pritchett and Shea, life for the prisoners was pleasant for war years and many locals felt they were coddled.  They were put to work on local projects within the fort and spent leisure time playing soccer, practicing music, or performing in plays.  Later, because of extreme labor shortages in Arkansas, they were allowed to work outside the fort and were paid a modest wage.  In our region, several worked on the levees along the river and 150 of them went to Russellville and worked for the Chickasaw Wood Products making stave bolts.

Very few tried to escape.  When they did, they were generally captured within a short period.  They were astonished to discover how very large America was and how remote they were from home.  In a story provided by Mrs. Frank Huck of Branch, Michael Huebinger, a young German soldier, escaped by simply walking away from a work squad.  Even though he had on a prison uniform with PW painted in white across the seat of his pants, he walked right by the guards.  When one asked him where he was going, he replied “Fort Smith” and just kept on walking.  He walked all night and slept in a thicket. He hid the next day in a parked truck near a dairy then walked until day break of the second day.  In the distance, he saw the spire of Sacred Heart Church in Charleston and decided to join the service.  Kate Classen saw the P.W. on his trousers and alerted her husband and the priest.  They talked to Huebinger and, after taking him home for breakfast, convinced him it was his duty to return.  He later wrote a thank you note to the family for their kindness.  Another escapee, when asked by his superior why he attempted the impossible escape, replied, “I just wanted to see those pretty girls in Fort Smith.”

Hundreds of prisoners cycled through the prisoner barracks of Fort Chaffee between the years of 1943 and 1946.  Due to extreme labor shortages and the required period of transition time to return home, many were retained for more than a year after the war was over.  During those three years, eight POW’s died from natural causes.  German officers and men were allowed to participate in the funerals and to bury their dead in respect and dignity.  In the intervening years, those bodies have been disinterred, and unless claimed by family, received final burial and Fort Sam Houston. The fair and kind treatment formed a lasting impression on these men, many of whom have returned to observe once again the site where they were imprisoned.

As one stated, “We are so happy and excited that people still want to know about our story, our history, and to read about and learn from it.”