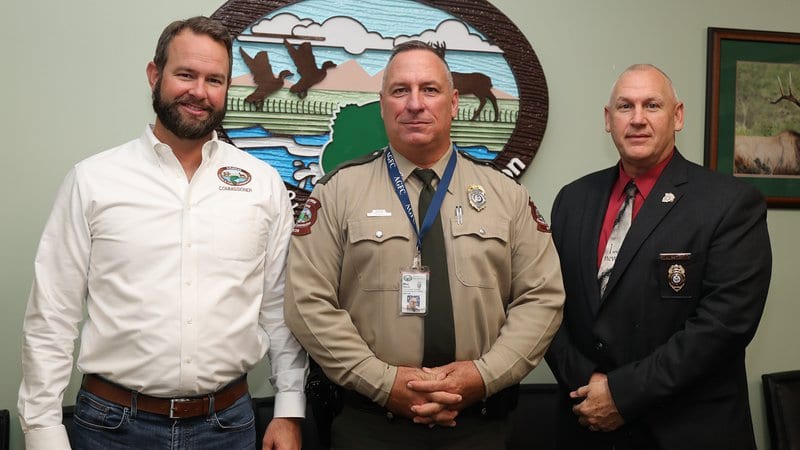 The Southeastern Association of Fish and Wildlife Agencies named Cpl. Mac Davis of the Arkansas Game and Fish Commission the 2020 Colonel Bob Brantley Wildlife Officer of the Year at their 74th annual meeting, held virtually Oct. 26-28. Davis has 20 years of law enforcement experience, including seven with the AGFC.

AGFC Director Patt Fitts said the selection is a real honor for Arkansas, but personally knowing the influence Davis has on his entire community, he knows it is well deserved.

“Wildlife Officers are more than enforcement officers for conservation agencies, they are the face of those agencies who are part of their communities,” Fitts said. “There is no doubt in my mind Cpl. Davis is a living testament to that statement.”

“Our conservation officers do so much more than the already daunting task of law enforcement, and Corporal Davis is no exception,” Johansen said. “From coordinating fishing derbies for nursing home residents to hosting antler shed hunting classes for Becoming an Outdoors-Woman, Officer Davis promotes hunting, fishing and conservation with a dedication and passion befitting the front line, public-facing employees of our fish and wildlife agencies.”

Davis has worked in Scott County for two decades and is called upon by other divisions and agencies as an expert for his county and community. He is the local contact for the AGFC Chronic Wasting Disease team and the citizens of Scott County. He is a leader on the disaster response team, saving six different people from floodwaters last year. Freely sharing his knowledge, Davis is a field training officer, an instructor at the AGFC training academy in defensive driving, traffic stops, and safe ATV operation, and taught 10 hunter education courses last year, including certifying the entire 8th-grade class at Waldron Middle School.

In addition to tremendous community engagement through organized sports and other events, Davis is a volunteer fireman. He regularly recovers deer hit by vehicles, cleans them, and takes them to a family in need and assists two local food banks with food distribution.

Davis was selected as the National Wild Turkey Federation’s State Officer of the Year in 2018. He received a Regional Forester Award from the USDA Forest Service in 2019 for assistance in a cultural resource theft investigation.

The Association’s Colonel Bob Brantley Wildlife Officer of the Year Award is determined by nominations submitted to the head of law enforcement from the SEAFWA states and territories. In addition to direct law enforcement, an officer is selected based on community service, attitude and leadership, outreach and education, interdepartmental cooperation, and innovations that may be used by other officers and departments.

The Southeastern Association of Fish and Wildlife Agencies is an organization whose members are the state agencies with primary responsibility for management and protection of the fish and wildlife resources in 15 states, Puerto Rico and the United States Virgin Islands. Member states are Alabama, Arkansas, Florida, Georgia, Kentucky, Louisiana, Mississippi, Missouri, North Carolina, Oklahoma, South Carolina, Tennessee, Texas, Virginia, and West Virginia.