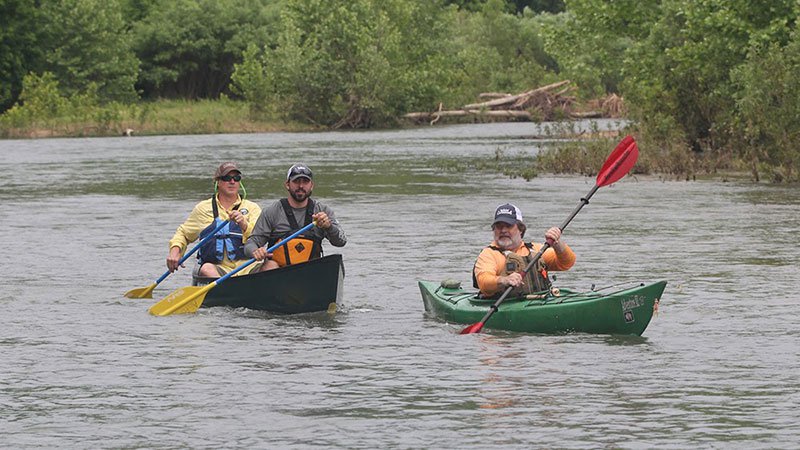 In the same general vicinity as the White Oak lakes, the AGFC hired contractors to spray nuisance aquatic vegetation at Mike Knoedl Tri-County Lake for the second time this year (above right photo). The efforts were largely focused in and around fishing jetties to address alligatorweed, a non-native invasive plant that grows and spreads aggressively in Arkansas waterways. Alligatorweed is especially difficult to treat in shallow water, according to biologists, and will often return to the shallow areas quickly. Tri-County Lake has 13 fishing jetties that offer great shoreline fishing locations, and the entire shoreline is open to public access thanks to the management buffer zone, which surrounds all AGFC-owned lakes. Tri-County features a good population of bass, bream and catfish, which are routinely seen around the fishing jetties in the AGFC’s routine sampling. *

The AGFC stocked more than 375,000 northern largemouth bass in the Arkansas River this year, with an average of 34,091 stocked in each of 11 pools of the river. The most stocked in any one pool were the 67,000 fingerlings of northern largemouth bass that went into the Dardanelle nursery pond to grow out and eventually be released into the lake; also, 42,000 went into the Ozark pool upriver from Dardanelle, and nearly 40,000 were stocked in the Little Rock pool.

All 11 pools of the river have been stocked with bass fingerlings since 2012. Pool allocations were adjusted in 2019 following the completion of the Arkansas River Task Force Stocking Recommendation, which also modified stocking methods to include a combination of stocking fish by boat and by hatchery truckets at boat ramp accesses.

In an attempt to increase fingerling survival, this effort emphasizes placing fish in more optimal habitats like backwaters with low current velocity, habitat complexity (submerged vegetation or woody structures) and areas of low predator abundance, according to the AGFC Fisheries Division. The goal is more 8-pound-plus trophy bass for anglers on the Arkansas River.