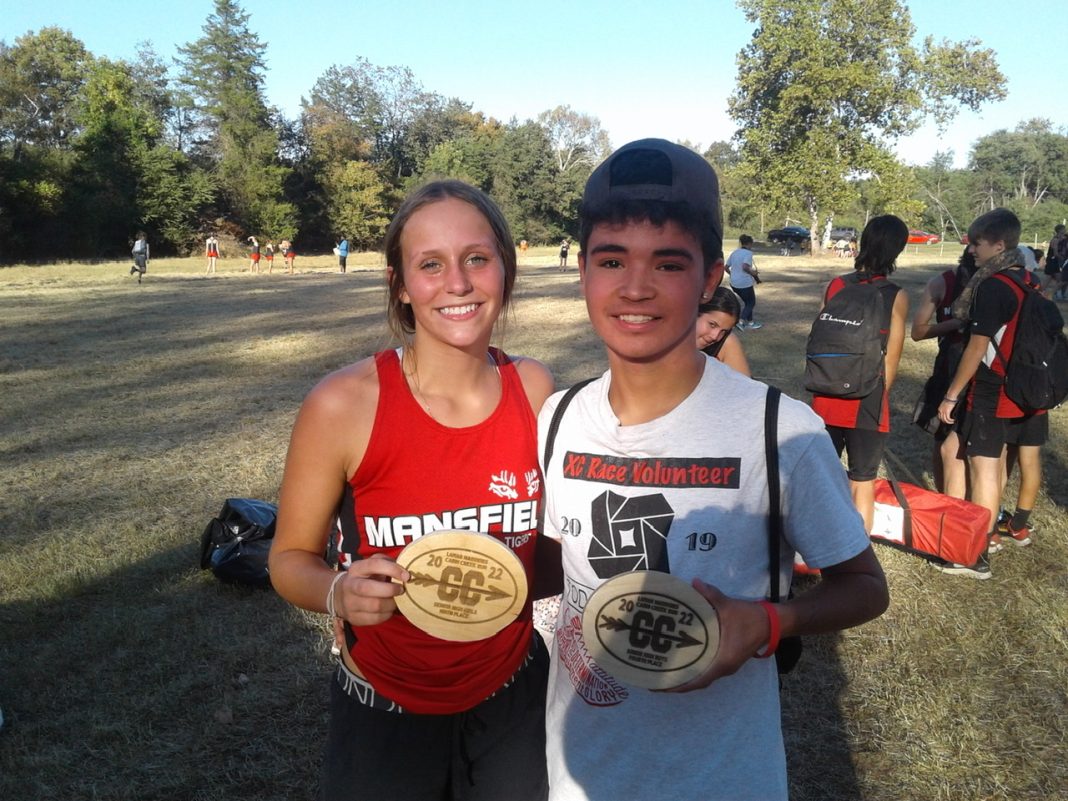 It’s called Cabin Creek for a reason. Lamar’s cross country race literally runs over the bedrock of Cabin Creek as it winds its way along the perimeter of Lamar’s new high school campus. At each exchange as the course moved from field to field, runners had to navigate the uneven erosion of rock and dirt of the dried up creek bed.

Mansfield took its troupe of long distance runners to the second annual Cabin Creek Run on Tuesday, September 27. With 561 actual participants in the combined scoring setup, the Tigers found the rate of individual success as rough as the course itself.

Joey Williams off the junior boys team led the ensemble with the best Tiger finish of the day. The freshmen contender was fourth overall against 161 players in his heat. Laney Wood from the senior girls company came in ninth overall against 124 finishers.

“Those two are scoring individual awards nearly every time out,” noted Mansfield head coach John Mackey. “This was really a stacked event. It’s pretty hard to crack the top ten when you lump all schools together. We’re talking about running against teams like Russellville, Northside, Pea Ridge, and Clarksville among the 35 registered schools.”

Williams held his own among the large field. His 1.6 mile loop was completed in 9:14.40. That was right at 20 seconds behind first place winner Ethan Lacy (8:54.10) of Pottsville. The only other junior boys to cross the timing mat before Williams was Owen Naveson (9:00.60) of Russellville and Aron Martinez (9:01.70) of Clarksville.

Wood was coming back from a weekend missed because of illness. The sophomore All-Stater missed the Mansfield hosted Today’s Bank Invitational on the previous Saturday. At Lamar, she bounced back to some degree with a 24:12.30 measure along the slightly long 5K Cabin Creek course.

Wood came in at ninth place sandwiched between two runners from the class 2A ranks. Silver Mulliniks (24:02.70) of Quitman and Lily Johnson (24:15.70) of Bigelow flanked the Lady Tiger’s number one runner.

“Those two schools (Quitman and Bigelow) are legit contenders for the state championship in class 2A,” said Mackey. “For us to have a chance in November, our best player needs to beat their best players. Laney has the tools to get it done.”

Jadelynn Wood, the older sister to Laney, likewise missed the Tiger’s home meet due to similar symptoms of sickness. The senior rebounded with her best 5K race of the season along the washed out rubble that intensified the Lamar landscape.

The elder Wood made the two loop trip in 25:06.50. That brought her home in thirteenth place.

Gunner Williams and Rylan Jones were the only other Mansfield products to crack the Top 20 in their individual races.

Gunner Williams, the younger brother to Joey by one year, posted a respectable 9:43.40 in the junior boys event. His 15th place finish would have upgraded to seventh had the games committee split the meet into big school and small school scoring.

“Gunner has consistently been our number two guy,” revealed Mackey. “He is working on a race strategy that may move him even higher in the overall ranks.”

Jones, just a seventh grader, has established herself as the junior girls number one runner. With six career starts now under her belt, the up and comer has never finished lower than 21st in any race. At Lamar, she took 16th in a time of 11:46.80 for the 1.6 mile loop.

“Rylan is figuring it out, and getting in better race shape,” offered the head coach. “Compared to her first race of the season at Perryville, this was nearly a minute faster.”

The junior boys had the best team score of any Mansfield cast. The lineup of Williams and Williams was joined by Jonah Martin, Hunter Whittaker, and Braxton Bartlett as a scoring five.

Collectively the group came in fifth place behind the ranked order of Russellville, Pottsville, Waldron, and Dover among 13 scoring schools.

“Despite the rough terrain, our junior boys’ times are getting better,” said Mackey. “Take Hunter (Whittaker) for example. He ran nearly one minute and twenty seconds faster than his first race one month ago. This makes sense as this group is the most consistent in completing practice plans on schedule.”

Behind the readings produced by the Wood siblings, decreased times were not in vogue for the MHS senior girls. As a group, the oldest of the Tiger squads managed only a seventh place team score with marginal times.

Overall placements dropped dramatically for the Lady Tigers in the 124 player field. The weighted scores were too much to overcome. The group landed behind Quitman, Pea Ridge, Pottsville, Bigelow, Clarksville, and Northside among twelve different scorting schools.

“Our players have to remember it’s a team game,” emphasized the longtime Mansfield mentor. “Individual effort still matters to the team score. If you’re in the boat, you need to be rowing whether you sit in the front or in the back.”

Mansfield has regular season meets remaining in Waldron, Magazine, and Van Buren. Their postseason championship phase continues with a conference meet in Magazine, regionals in Mena (hosted by Acorn), and state in Hot Springs.