Rattlers Freezing Out Their Rivals 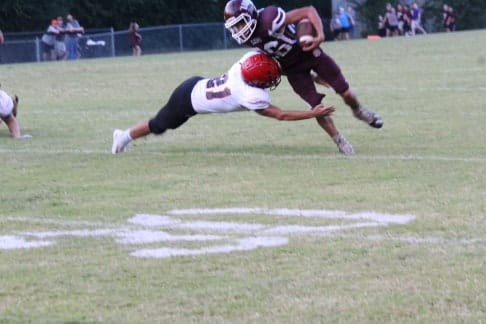 Anyone with any sense knows that if you encounter a rattlesnake, you want to freeze and slowly retreat. Well, that is exactly what’s happening to the Magazine Rattlers competition this football season. Sitting with an accomplished 2-0 overall season record, the Rattlers have been striking anyone who crosses their path. After their 46-20 win over Bigelow in their first game, Magazine decided to go for broke and pulled out an exciting 39-14 victory over Mount Ida.

The first half of the game was where most of the excitement occurred. The Rattlers put 33 of their 39 points on the board during the first two quarters. Helping achieve that success was Xeng Yang with a high-speed 21-yard rushing touchdown along with Tatum Scotts 2 point conversion pass to Jacob Hall and the Rattlers score was set in place at 14-0. Nailing an 8-yard rushing touchdown was Kaedon Trejo and with the extra PAT, the Rattlers moved the board to 21-0 Magazine.

Quickly recovering a Mount Ida fumble was Ashton Droemer and along with the two added touchdowns by Scott and Caleb Hyatt, the Rattlers went into halftime up 33-0. Magazines defense continued staying busy in the second half of the game only allowing the Lions to put 14 points on the board. Kobe Faughn rushed for one more touchdown and the Rattlers ended the game with a huge win.

Magazine will have a bye week before hosting Cutter-Morning Star on September 20. This year, the Rattlers aren’t taking any lip service from anyone let along permitting the competition to come into their home with hopes of trying to defeat them.