Thanksgiving is a Time for Family… 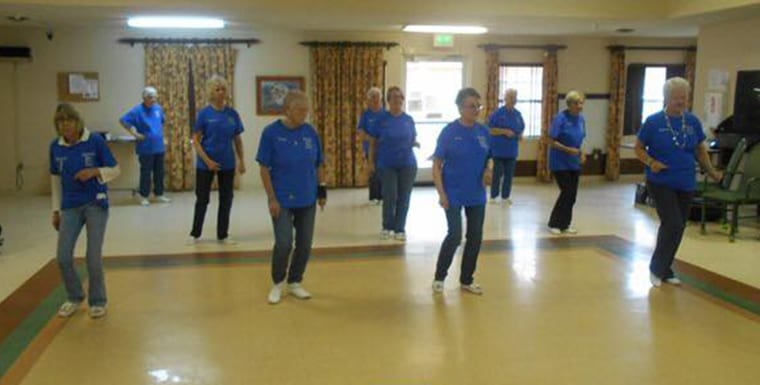 Article, and images courtesy of Christine Lees LSW/ADC
(Referencing above image) Booneville Senior Citizen Support Stocking Revue Dancers entertain residents of Waldron Nursing Center with a variety of exercise dances that residents can help them out with during the activity.
Waldron Nursing Center joins in with others Nation wide in celebrating “National Activity Professionals Week” January 22-28-2017 “Celebrating Life, Touching Hearts”. Recognition was given to Alex Carter & Billie Strozier, Activity Assistants to Christine Lees LSW/ADC. Billie & Alex both are to be commended for their caring ways toward our residents and helping implement our activity programs. Alex & Billie both received gifts of recognition from Waldron Nursing Center administration and Activity Department Supervision, Christine Lees, in appreciation of all they do for our residents.
Activities this week included our Special event of “Let’s Make a Deal”. A big favorite of everyone and back by popular demand from the residents at Resident Council. There was a large group that attended, lots of very nice prizes “thanks” to those that had donated prizes special for this activity as well as the “noted” gag prizes. There were large Teddy Bears, jewelry and bath items to win. The great “gag” prizes included the famous “big mama bra”, bikini bottom & the ever famous “bulldog TV” made from the cereal box as well as the “ugly stick and box of rocks”. Some of the guys were quiet astounded when they picked the box that had the “Big bra or cow panties under it” . It was all in great fun and there was much laughter as these prizes appeared from under the boxes. The game consisted of three big boxes with large numbers of #1- #2 or #3. Each one took a turn at pointing to the box they wanted.


Whatever was revealed under the box is the prize they won unless it was a gag prize and then they got a second chance of trading it in for another box. Some had to keep a close eye on Alex as he was the one hiding the prizes under the boxes and they were not sure if he was sneaking in one of the dreaded gag prizes, as Billie helped me with photo making and getting everyone in line to take their turn at the game. Everyone had a great time and are already looking forward to playing again at a later date. Thanks to Marie Payton & Teresa Brixley for the great big teddy bears along with Patti Roets for the jewelry.
Other events included the Booneville Senior Citizens, Support Stocking Revue dancers, June, Connie, Marcia, Phyllis, Joan, Joy, Nancy, Fern, Shirley and Joyce. Our residents really enjoy this group and always look forward to their return in January after being off for the holidays. Other events included Sunday services with James Self, Monday night singing with Temple Baptist group, Reminiscence with Diane Miller, Bingo on Wednesday and Friday afternoon with our great Volunteers, Doyle Wayne & Karen, Joanna Strozier and Pat Morales all helping out at the games. Singing with Packsaddle church, cooking, nail painting with Billie & Alex, Exercises, Tuesday night services with David Hines, Church with Larry Justice & group, Resident Council, Crazy Bingo on Saturday with Alex just to name some of the events that are keeping everyone busy.
The hallways and dining room area is really looking festive for celebrating Valentine’s Day since Volunteer Joanna put all of the decorations up. We are also in the “Valentine” mode by getting the Valentine holders made and ready to hang beside each resident door. Several of the residents have been working on getting their Valentines ready to pass out. I received a large packet in the mail from Oleta Goodner Lewis from Cabot, AR. Everyone is invited to help us out with filling the resident Valentine holders. They get so much enjoyment when they check their holders to see who has sent them a new card. We just use the student type cards so if anyone would like to help us out. Just sign your name on the back of the card and bring them by and I’ll be glad to drop them in the holders or feel free to make the rounds yourself to put the cards in. The holders will be ready by the first of February and just waiting to be filled. If anyone wants to mail them by bulk just send it to my attention, Christine Lees,  at Waldron Nursing Center P. O. Box 2230 Waldron, AR. 72958   with your name on the back of each card and I’ll be glad to put them in the holders.
In closing our deepest sympathy goes out to the families of Maxine Williams and Virgie Simpson. Both of these residents will be greatly missed.
- Advertisement -